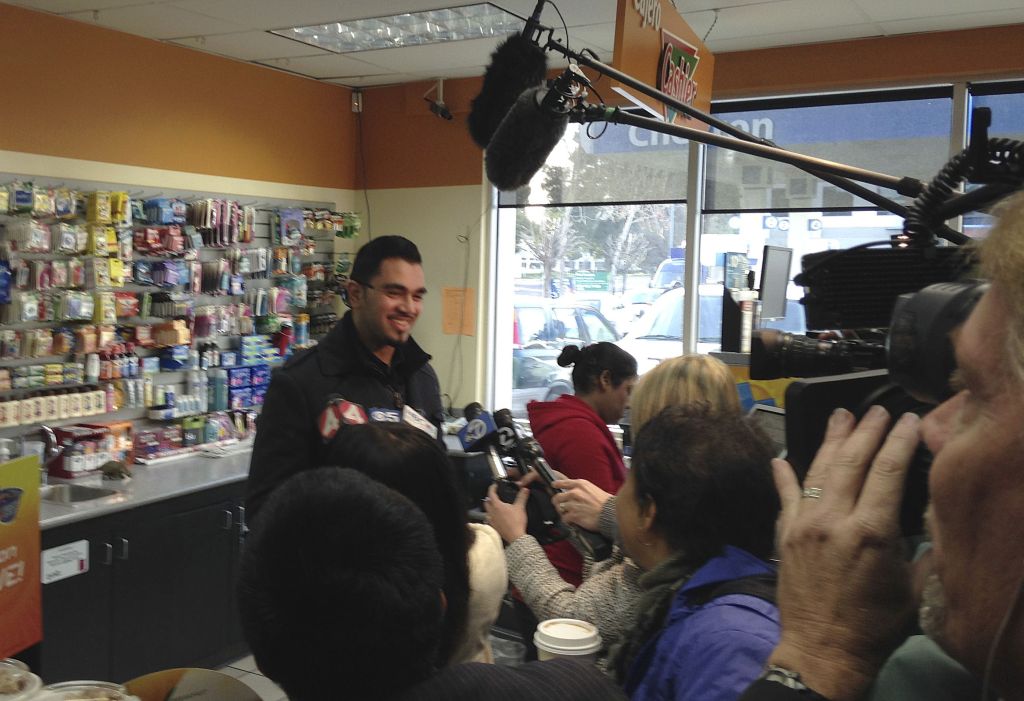 MILPITAS, Calif. (AP) — A Northern California convenience store that sold the sole winning ticket to the $425 million Powerball jackpot received a $1 million check on Thursday, as state lottery officials waited for the winner of the one of the largest jackpots in U.S. history to come forward.
The California Lottery presented the check to Parmeet Singh, whose family owns Dixon Landing Chevron in Milpitas, a city about 10 miles north of San Jose that bills itself as The Gateway to The Silicon Valley. In California, retailers who sell winning jackpot tickets receive a share of the prize money up to $1 million, according to lottery officials.
The family-run gas station is just off Highway 880, with an attached carwash and Subway sandwich shop. The parking lot was crowded Thursday morning with television news vans while inside the store, dozens of reporters and photographers crowded the aisles of snack foods as Singh talked about his surprise at hearing the news. The store’s regular customers bantered about the prospect that one of them could have been the winner.
“I didn’t believe it,” Singh said. “I ran outside and yelled, ‘Oh, my God!”’
Singh said his father, Kulwinder Singh, owns the store but was en route to India and wasn’t expected to hear about the $1 million prize until after he landed in New Delhi around 11 a.m. PST Thursday and called the family. He had given his son his cellphone before leaving to avoid any business headaches that might come up during his absence, Singh said.
He planned to tease his dad before breaking the news.
“‘Hey dad, what would you do if you had $1 million?”’ he said he would ask him.
His parents are humble people, he said, so he didn’t expect them to splurge on anything. The family would likely reinvest the money in their chain of eight gas stations, he said.
Singh and employees at the store did not know who the winner could be, though he hoped it was one of the store’s regular customers.
The winner has up to a year to come forward and claim the prize and could opt for a lump sum payment of $242.2 million, according to state lottery officials. They advised the person with the winning ticket to immediately sign it and consult an attorney, accountant or financial planner.
The winning numbers — 1, 17, 35, 49, 54 and a Powerball of 34 — were drawn on Wednesday. Only one ticket matched all the winning numbers, Powerball officials said.
The $425 million jackpot was the sixth largest jackpot in U.S. history and the fourth largest Powerball jackpot, state lottery officials said.
A ticket for the nation’s second-largest lottery prize was also purchased in the San Francisco Bay Area. In December, two winning tickets were purchased in San Jose, Calif., and Atlanta, for a $636 million Mega Millions prize.
Mona Sanders, a California Lottery official who came to the Singh’s gas station, said she was very excited to have two major winners in her district in slightly more than two months.
“I was like, ‘What? Again? Not me,”’ Sanders said. “When I found out the winner was again in my district, I was so surprised.”
The nation’s biggest lottery prize was a $656 million dollar Mega Millions jackpot in 2012. The biggest Powerball jackpot was a $590.5 million last May.
Wednesday’s drawing also saw 17 tickets match enough numbers to win $1 million, and one ticket won a $2 million prize, according to a statement from Rose J. Hudson, chair of the Powerball Game Group and president of the Louisiana Lottery.
Changes to top lottery games have created bigger jackpots in shorter periods of time. More than half of the top 10 prizes in U.S. lottery history have occurred since 2012, according to statistics provided by the Multi-State Lottery Association.
Powerball’s game changes in January 2012 included an increase in ticket price from $1 to $2. Starting jackpots went from $20 million to $40 million, and pots increased by more money with each roll. Mega Millions also went through a revamp that included decreasing the odds of winning the top prize to 1 in about 259 million.
Powerball is played in 43 states, Washington, D.C., and the U.S. Virgin Islands. The odds of matching all six numbers are 1 in about 175 million.
———
Thanawala reported from San Francisco.