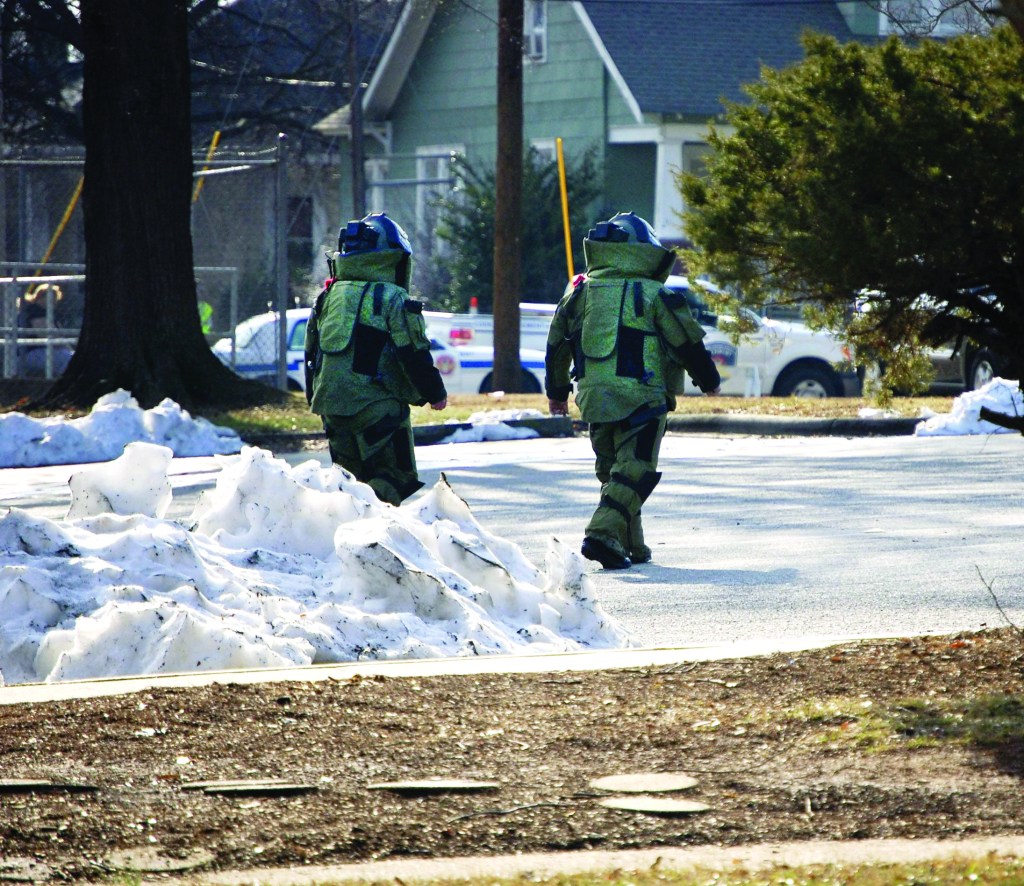 Investigators still haven’t determined the contents of a suspicious package discovered Wednesday at the U.S. post office on East Innes Street.
Salisbury Police were called to 605 E. Innes St. at 1:15 p.m. after a woman went inside to sign for the package. When she went to open the package, she was stopped when a postal employee saw wires.
The building was immediately evacuated, said Salisbury Police Capt. Shelia Lingle.
Lingle said parts of Martin Luther King Jr. Avenue, South Clay and East Fisher streets were blocked off as a precaution and traffic detoured. Police called a bomb sniffing K-9 from the Rowan County Sheriff’s Office while the Cabarrus County Sheriff’s Office Bomb Squad was initially on standby. However, the dog was not deployed. The bomb squad arrived just before 3:30 p.m. and a few members began putting on their bomb disposal suits.
The bomb squad went inside the post office while police remained on the perimeter of the block making sure motorists and pedestrians were out of the way. Members of the U.S. Postal Inspector Police were also on hand at the scene to investigate.
Lingle said police officers moved bystanders farther away from the post office and closed the streets when the bomb squad went inside to investigate the package. Residents nearby were asked to stay inside their homes, she said.
Lingle said the package was “neutralized,” meaning if there was anything inside that could’ve been an explosive device, it was separated so that it would not explode.
“At this time they don’t believe that was the case, but they are still doing an investigation on it to process it,” she said.
Police instructed a woman and man in the parking lot of Taco Bell, located directly across from the post office, to not use their cell phones before the bomb squad removed the package. The area around the post office was blocked, with only law enforcement allowed in the vicinity.
Shortly before 4:30 p.m., police began blocking off access to Innes Street, beginning near Christo’s Family Restaurant in the 400 block, and ending in the 800 block of East Innes Street just before Sam’s Car Wash. Early on, postal employees were congregated across the street in the parking lot of Captain D’s restaurant. They were later instructed to move farther back into the Office Depot parking lot.
Police officers went into area restaurants that included Wendy’s, McDonald’s, Taco Bell and KFC to inform people they needed to evacuate. A Post reporter could hear officers instructing another officer to tell businesses to “lock the door and get out.”
Employees at Captain D’s were given the option to stay inside, but lock the doors. The few employees in the restaurant locked the store, but they decided to wait outside on the far side of the restaurant, away from the post office.
Captain D’s employee Phyllis Worth said she was just coming into work when the police told her and the others to stay inside.
“I came out to save my life,” Worth said.
Employees Denitra Clement and Nina Clark said they felt safer outside on the far side of the building.
Sabrina Hepler and friend Krystal Blalock were both eating at McDonald’s when police said they had to evacuate. The women asked a postal worker what the activity was about and he told them there was a suspicious package. Hepler said they continued eating since they believed it was akin to a bomb threat.
“We saw a bunch of police. We ate, then we went to Kmart,” Hepler said.
James Clodfelter said he was on his way to the post office to get mail and was detoured from Long Street where he circled around through the Office Depot parking lot. He was confused by all the activity, he said.
Russ Roakes stood on the sidewalk outside Christo’s Family Restaurant and snapped pictures of the roadblock and empty span of East Innes Street that appeared desolate except for officers and emergency service personnel walking about.
“They evacuated the Wendy’s and the manager ordered everybody out,” Roakes said. “It is better to be safe than sorry.”
A daily walker on the downtown streets, Roakes said he was thinking about going closer to the post office but changed his mind when he saw officers diverting the overflow of rush hour traffic onto side streets.
“I thought it was better to stay back. I haven’t seen anything like this in Salisbury,” Roakes said. “Sometimes it turns out to be nothing, but the one time you don’t take it seriously — somebody may end up getting hurt.”
Roakes said he hopes the package was “just a box of cookies” someone mailed.
Standing behind the Waffle House counter with two co-workers, Makhaila Charlton watched the officers divert traffic and said she asked herself why other establishments were evacuated and Waffle House wasn’t.
“We should be closed like Wendy’s. I don’t care that Wendy’s is closer (to the post office) than us. I guess they are going to keep us open because we are open 24 hours. Somebody should at least be with us like a manager or somebody,” Charlton said. “I came to work to work — not to die.”
Once police reopened Innes Street, many restaurants opened their doors to customers and traffic was allowed to travel freely.
Contact reporter Shavonne Potts at 704-797-4253 or Jim Holt at 704-797-4246.