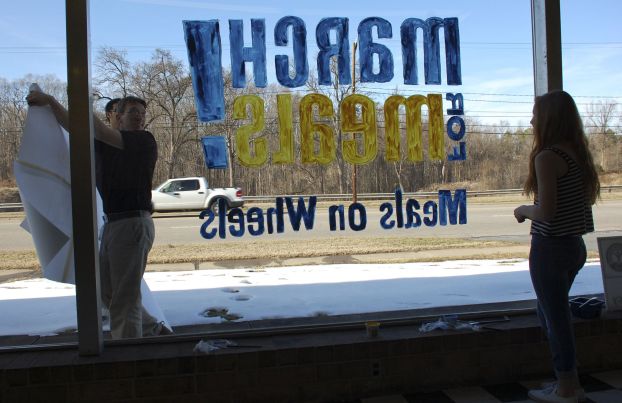 SPENCER — On a normal afternoon after classes at Salisbury High School, Christian Cabrera would be gearing up for his nightly Tae Kwon Do instruction.
Leea Earnhardt would be on the softball field under the watchful eye of Coach Leigh Miller.
But Cabrera and Earnhardt steered away from their routines Tuesday and, with guidance from Salisbury High art teacher Sean Hunter, gave the Meals on Wheels headquarters a new window to the world.
Or at least a new look through that window.
The Salisbury High Art Club officers painted a blue-and-gold logo for “March for Meals,” the month coming up when local Meals on Wheels organizations across the country reach out to their communities, trying to build the support that sustains their programs over the whole year.
The local Meals on Wheels will have its annual BBQ March 11, from 11 a.m.-6:30 p.m. at First Presbyterian Church in Salisbury, 308 W. Fisher St.
The week of March 17, Meals on Wheels will promote a “Community Champion Week,” when local officials and other community leaders help deliver meals to seniors on routes throughout Rowan County.
Monday of that Community Champion Week will be a delivery day for elected officials; Tuesday, pastors; Wednesday, school officials; Thursday, healthcare workers; and Friday, professionals.
Cabrera, who is a 6-5 senior, and Earnhardt, a 5-2 junior, easily covered the high and low portions of their window sign, following a paper outline of the block letters made a day earlier back at school.
They are advanced art students who have been under Hunter’s tutelage since they were freshmen. The March for Meals logo serves as a community project for the club, which also painted the mural on the side of Cut Up & Dye as part of a neighborhood beautification day in Salisbury.
“We never really know what’s going to come up, until it comes up,” Hunter says.
Carol McNeely, one of three employees at the Meals on Wheels headquarters with Executive Director Rita Sims and Sandy Combs, thought of the Salisbury High Art Club when the window idea for promoting March for Meals came up.
McNeely’s sons Wes and Paul, now students at N.C. State University, had been art students with Hunter, as her youngest son, Sam, is now.
Hunter never hesitated when he received the Meals on Wheel request.
A United Way agency, Meals on Wheels has been in its new headquarters in Spencer since last October. The former auto parts store at 1303 S. Salisbury Ave. affords generous window space, so there was plenty of room for the students’ work to the left of the front door.
Sims says Meals on Wheels’ biggest goal is to build a kitchen in the new location and do all the cooking for the lunches from there.
The organization has hired an architect to draw up the renovations needed. Committee approval, fundraising and grant requests will have to follow.
Sims says she hopes a headquarters kitchen can be up and running in 12 to 18 months. The new headquarters has the potential to offer everything Meals on Wheels needs — offices, a kitchen, great storage space and plenty of parking.
At present, the organization contracts with Jimmie’s in China Grove and C.J.’s in Cleveland to cook and prepare the meals, which are delivered later by teams of volunteers.
Meals on Wheels delivers 200 meals daily.
Sims says she is trying to build a new team in the Rockwell area. Volunteers usually must count on a hour’s time for the days they deliver meals.
Sims says interested people should call her office at 704-633-0352.
College Barbecue caters the March 11 fundraiser. Tickets are $8, and customers can dine in, take out or drive up. Meals on Wheels will deliver barbecue dinners to places with five or more orders.
The Art Club students say if the gold lettering in their new logo needs another coat, they plan to return.
Cabrera assured the Meals on Wheels folks that when March is over, “this (paint) is all going to come off very easily.”
If sign-painting isn’t exactly in her future, Earnhardt hopes to pursue a career as an interior decorator.
Cabrera wants to delve into the culinary arts — so he was a perfect choice for helping Meals on Wheels this week.