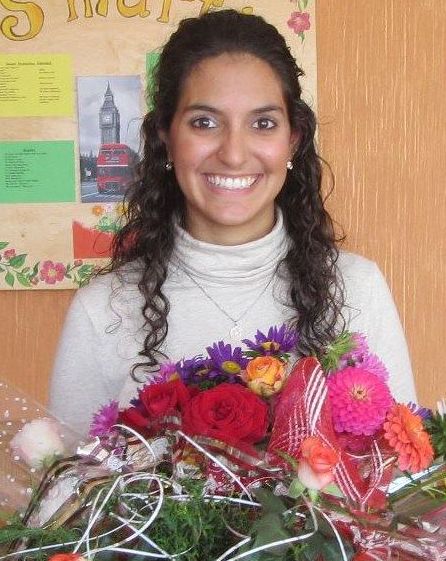 SALISBURY — Maria Corriher, a South Rowan High School graduate, finds herself trapped in Kiev, the Ukraine capital where violent protests this week have resulted in at least 26 deaths.
Corriher, a 25-year-old Peace Corps volunteer and daughter of Alicia and Kurt Corriher of China Grove, is all right and staying inside the organization’s headquarters, about a 20-minute walk from Independence Square where the fighting has been continuing.
Maria’s father spoke to her by telephone Wednesday.
“She’s fine,” Kurt Corriher said. “The offices have Ukrainian guards. She doesn’t feel threatened.”
In a Facebook post, Maria reiterated what she told her father: “I do feel safe,” she said. “There are guards and a fence where I am. I can’t hear the craziness … it’s still kinda far, but there are a lot of people out on the streets since transportation is down.”
Protests in Kiev began last November when Ukraine President Viktor Yanukovych rejected a landmark association and trade deal with the European Union and instead favored closer ties with Russia.
Violence erupted outside parliament Tuesday morning, and protesters were said to be throwing paving stones, fireworks and gas bombs, while police answered with water cannons and stun grenades, but each side accused the other of using live ammunition.
Maria Corriher, also a graduate of Davidson College, is working toward the end of her two-year Peace Corps assignment in a remote village in the northeastern part of the Ukraine.
Emergency surgery for a ruptured ovarian cyst Jan. 31, her birthday, led Maria to a Kiev hospital, and in recent days, she was moved to sick bay at the Peace Corps headquarters to complete her recovery.
She had expected to return to her village later this week.
Kurt Corriher said his daughter was now stuck at the headquarters with four other Peace Corps volunteers who were there on other business.
“Please keep your thoughts and prayers with the Ukrainian people during this difficult time,” Maria also posted on her Facebook page.
She added she was “staying safe and sound in the office.”
Kurt Corriher, professor of theatre arts and director of the Center for International Studies at Catawba College, said Maria has several projects she wants to finish up in her village, where she has been teaching, establishing a summer camp and helping with youth development.
“I’m proud that she wants to stay,” he said. “I’m very proud, and I have to accede to her wishes, but I would feel better if she were somewhere more stable.”
Maria is supposed to finish her stint with the Peace Corps in the Ukraine May 16.
Corriher said Maria is fluent in Spanish, and the family had expected the Peace Corps to send her to a Latin American country, but Ukraine became her destination instead.
She majored in psychology at Davidson College. She has not been able to return home since her departure in March 2012, but Maria has had a little time to travel in Europe, her father said.
The Corrihers have been able to be in contact with her every day by telephone or Skype.
“It’s good we can be in touch with her all the time,” Kurt Corriher added.
Maria’s 21-year-old brother, Adam, was planning a trip to the Ukraine to visit with his sister in two weeks. The Corrihers already had bought his plane ticket.
“We could be eating that, unless there’s a big change for the better,” Kurt Corriher said. “… He really wants to see his sister.”
The Corrihers are, of course, closely monitoring international news reports about the tense situation in Kiev.
Maria’s medical situation was of great concern to her family before the Kiev protests. Back in her village, she experienced intense pain from the ruptured cyst and was transported by ambulance to the nearest city of size, where doctors determined she had internal bleeding.
Kurt Corriher said the methods and facilities were archaic, but Maria had to undergo an emergency operation. The recovery process has been lengthier than it probably would have been in the United States.
Maria had been moved to a more modern hospital in Kiev when she was well enough to travel.