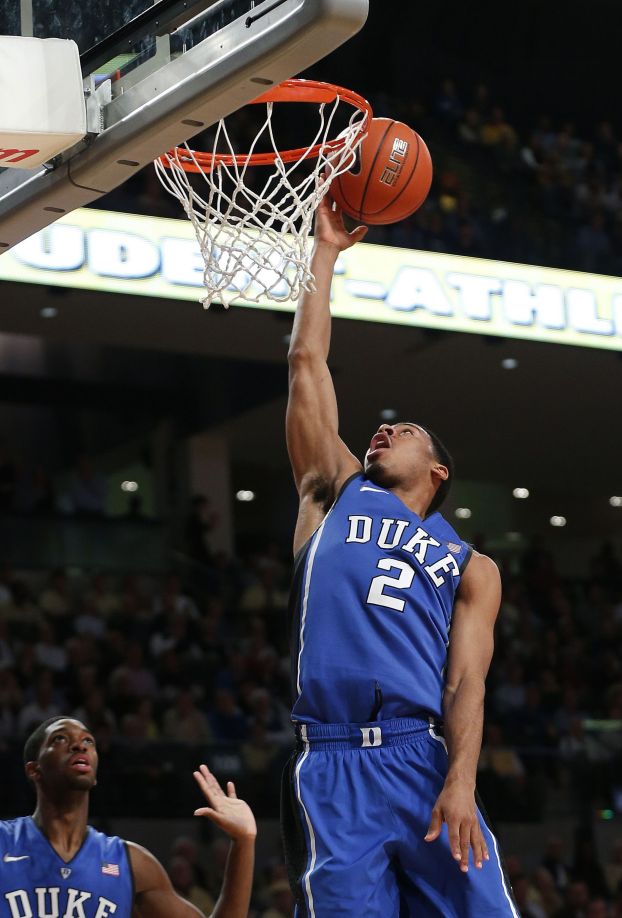 ATLANTA — Duke coach Mike Krzyzewski insists there has been no talk of big games still to come this week.
Convincing evidence came in the way the Blue Devils kept their focus in a win over Georgia Tech. Jabari Parker had 16 points and 14 rebounds, and No. 5 Duke rolled to a 68-51 victory on Tuesday night.
Duke started strong, kept up the defensive pressure, and maintained its double-figure lead for the final 28 minutes.
“Our guys played a heck of a first half,” Krzyzewski said. “I mean we played with amazing energy and focus.”
Rodney Hood sank four 3-pointers and scored 14 points for Duke, which never trailed. The Blue Devils (21-5, 10-3 Atlantic Coast Conference) have won four straight and nine of 10.
“We came out with a sense of urgency,” Hood said. “We didn’t want to take them lightly.
“We wanted to come out and try to dominate from the beginning.”
Duke is in a hectic run of four games in eight days. The Blue Devils will play at North Carolina on Thursday before facing No. 1 Syracuse on Saturday. The North Carolina game was postponed on Feb. 12 because of a winter storm. The stretch began with a win at Maryland on Saturday.
“We haven’t even talked about those two games, so there’s no buildup for us,” Krzyzewski said. “We respect the heck out of Georgia Tech.”
Robert Carter Jr. led Georgia Tech (13-13, 4-9 ACC) with 13 points. Kammeon Holsey had 12, and Chris Bolden added 10.
Georgia Tech center Daniel Miller had nine rebounds but only two points.
“He didn’t get the ball that much because our perimeter defense was the best it has been all year,” Krzyzewski said.
Duke scored 16 points off Georgia Tech’s 13 turnovers, including five by freshman guard Corey Heyward.
“I think our defense transitioned to offense,” Parker said. “We were able to get stops and able to score, so we put ourselves in a good situation.”
Duke led 50-30 early in the second half before the Yellow Jackets cut the deficit to 52-40.
Hood’s 3-pointer, followed by Parker’s offensive rebound, basket and free throw for a three-point play, pushed the Blue Devils’ edge back to 18 points.
Georgia Tech couldn’t muster another comeback attempt.
After making only five of 24 3-pointers in Saturday’s 69-67 home win over Maryland, Duke made 10 of 18 3s against the Yellow Jackets. The Blue Devils, who lead the ACC in 3-point shooting, made six of their first eight — including three by Hood — and pulled ahead 34-16.
Duke, which has lost twice on the road to unranked conference opponents Notre Dame and Clemson, was 3-3 in ACC road games before Tuesday.
Parker, who recorded the ninth double-double of his rookie season, and Hood helped make sure the Blue Devils were sharp early. Hood had three 3-pointers in the first six minutes, and the Blue Devils led 38-19.
Like most teams, Georgia Tech struggled to match up with Parker (6-8, 235).
“Unless you have a strong chest in front of him, you have no chance. No chance,” Georgia Tech coach Brian Gregory said. “There’s no question what he’s going to do when he gets the ball.
“The way he drives, it’s impossible not to have contact. It’s a foul every time.”
Georgia Tech, which trailed by only one point at halftime of its 79-57 loss at Duke on Jan. 7, trailed 43-27 at the break of the rematch.
“Give Duke a ton of credit,” Gregory said. “They came very focused and came with great force on the defensive end. They have improved tremendously since the first time we played them.”
Rasheed Sulaimon had 11 points for Duke.
The crowd of 8,600 was Georgia Tech’s first sellout of the season.