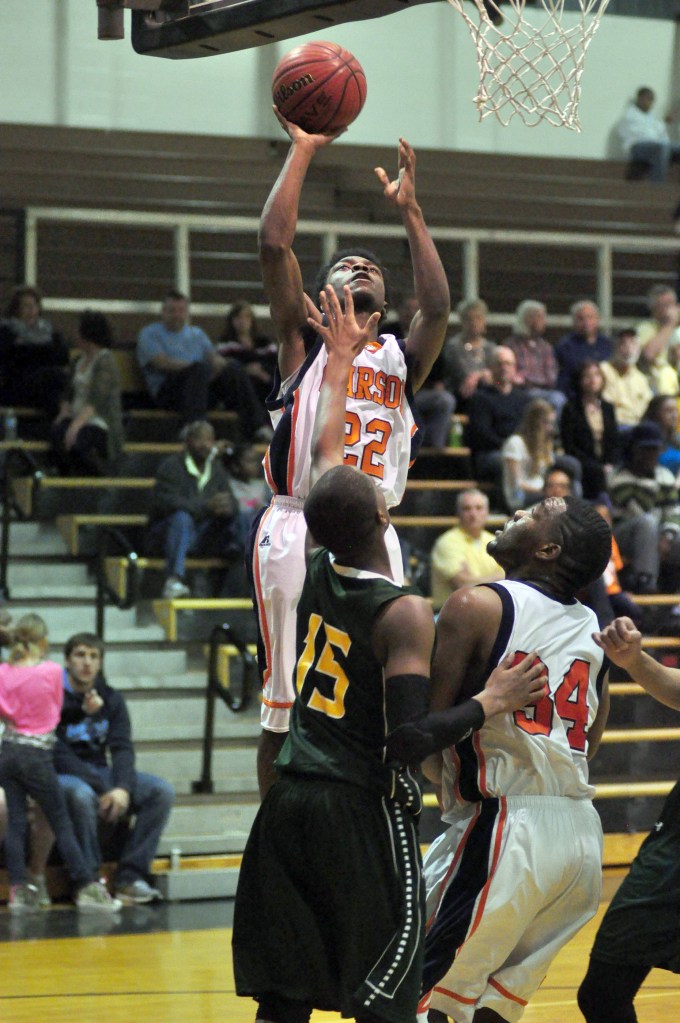 CONCORD — With the semifinals and finals of the Southern Piedmont Conference tournament slated to be played at Carson Thursday and Friday, the Cougars definitely wanted an invitation to that party.
They not only secured their slot in the semis, but did so with a statement win.
Fourth-seeded Carson blew past No. 5 Central Cabarrus 80-65 Tuesday night in Concord in the first round to emphatically punch their ticket.
“It feels good not to be watching somebody else play at Carson,” Cougar coach Brian Perry said, with a sigh of relief. “We are definitely glad that we won so we’ll have a chance to play at home in front of our fans.”
On the heels of Monday’s heartbreaking last-second loss to Cox Mill, Carson came out firing against the Vikings looking to end a four-game skid.
Tre Williams drilled a trey to open the game, scoring seven of the teams’ first 11 points.
Williams then knocked down an elbow jumper as the Cougars pulled ahead 11-10 late in the first and never looked back.
Big man Colton Laws sank back-to-back 3-pointers early in the second to push the lead out to seven at 28-21.
After the Vikings cut it down to two, Carson tallied seven of the final 11 points to take a 37-32 edge into the locker room.
The charge carried over into the second half as the Cougars opened on a 16-6 run to snag a commanding 54-38 advantage in a blur.
“I thought our big guys were really running the floor and that we were able to put some pressure on them defensively,” Perry said. “We were really good in transitions. Once we got those stops, we took off and were able to extend that lead.”
Central never rebounded from the blow as Carson maintained its double-digit lead for the rest of the game. The Vikings never managed to get closer than 11 (58-47).
Laws sealed the win with back-to-back fastbreak layups over Central big man Anthony Mullis with just under four minutes to play as the Cougars cruised.
“We’ve struggled lately,” Perry explained. “We just needed a win. So it’s nice to see our guys grind it out at the end.”
“I think everybody is the same right now,” he continued. “I know it’s an old cliche, but we’ve tried to really build that up because what happens from this point forward is what we’ll remember for this year.
“I think our guys are buying into that so we’ll try to make a nice run for the rest of the tournament.”
Four Cougars finished the night in double figures, led by Williams’ 22. Laws added 16, while Marquez McCain and MyQuon Stout pitched in with 11 and 10 points, respectively.
Carson now turns its focus to top-seeded and unbeaten regular-season champion Concord in the semis.
The Cougars nearly upset the Spiders in the last meeting earlier this month in China Grove with the champs escaping with a six-point victory.
“Concord is the big dog in the conference,” Perry added. “Everybody wants the chance to beat them.
“Hopefully we’ll have a really nice crowd and show them a good game.”
Tip off is set for Thursday at 7:30 p.m.