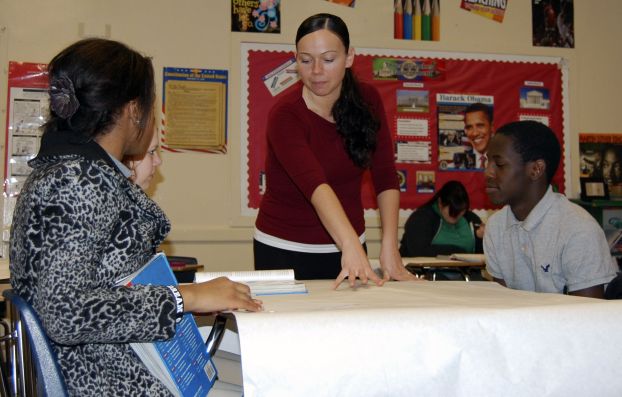 Belinda Rojo was born into poverty, she was bullied throughout her school career and she had a baby during her senior year of high school.

But Rojo knows a thing or two about overcoming the odds.

The 24-year-old now lives above the poverty line. Not only did she graduate high school, but she has her bachelor’s and master’s degrees as well. She’s happily married and she has a 7-year-old son.

Rojo credits her success to education and the teachers who have helped her along the way.

She grew up in a trailer park, receiving Medicaid and food stamps.

Rojo and her sister rarely got new clothes, and oftentimes their shoes would fall apart long before they could afford a new pair.

“We always got made fun of for our clothes and our shoes,” she said, recalling the days she spent crying in the bathroom because she was bullied about what she wore.

Rojo’s mother never went to high school, which not only affected her ability to find a high paying job, but also kept her from being able to help Rojo with assignments at home.

She eventually was able to complete her GED, but just a GED doesn’t take you very far, Rojo said.

In second and third grade, Rojo was in De’Bora Parker’s class at Aycock Elementary School. It was there she fell in love with learning.

Not only did Rojo learn a lot academically in that class, but Parker also taught her students character traits such as respect.

“She played a huge part in me becoming a teacher,” she said. “I just wanted to be so good for her.”

Rojo never drank or did drugs like many of her peers. Looking back, Rojo said it was because she never wanted to disappoint the teachers that believed in her and expected better things from her.

“In middle school, I wanted to be good in everything,” she said.

But after her mom attempted suicide, Rojo’s grades suffered dramatically.

Perhaps the most poignant moment in her academic career was the day that her eighth-grade teacher, Amy Minton, pulled her into the hallway for a private talk.

“She told me, ‘You need to get it together, or you’re going to have be in eighth grade again,’ ” Rojo said.

Minton had noticed that Rojo was spending time with students with destructive habits. She told Rojo that she would call her mom if she didn’t shape up.

“My mom is far from strict,” Rojo said, adding that she was more concerned about letting Minton down.

“I knew that she expected more from me and she was not playing,” she said.

Her junior year, Rojo’s family was evicted from their trailer and had to move in with her grandmother.

Around that time, she also found out that she was pregnant.

Once again, teachers and administrators were the reason Rojo didn’t give up on school.

“They believed I was going to graduate,” she said.

Being pregnant and having a newborn in high school was stressful at times, she said.

Her junior year, she waited to buy her prom dress until a week before the event. Even still, it hardly fit her the day of prom.

During her senior year, her son, Brian, was born.

“It was so stressful with Brian crying at night,” she said.

Jose, then her boyfriend and now her husband, was and is incredibly supportive, she said.

Rojo graduated from A.L. Brown in 2007. She was the first person in her immediate family to graduate from high school.

In September of 2007, she and Jose were married.

She attended Rowan-Cabarrus Community College for two years, then she transferred to the University of North Carolina at Charlotte.

She graduated in 2011 with a bachelor’s degree. Her major was history and she minored in secondary education.

She’s the first person in her extended family of more than 60 people to attend college and graduate.

After she applied for licensure and took two accreditation tests, Rojo was able to secure a position at A.L. Brown teaching history and civics.

In December, she received her master’s of education from the University of North Carolina at Charlotte.

Rojo said life is much different for her family now that she has graduated from school and is working as a teacher.

Not needing help from anyone is a freeing feeling, Rojo said.

She remembers history coming alive through her professors’ lectures and all the fascinating stories and little known facts she learned.

One time, she was required to do a project on a Ku Klux Klan member. It wasn’t until she began working on the assignment that she realized her middle school had been named after a Grand Dragon.

“I feel like you’re not taught that,” se said.

When she learned that Japanese-Americans were imprisoned in internment camps in America during World War II, she was flabbergasted.

It was stories like those that made her want to teach history.

“I can make it relatable,” she said.

She does this by bringing in “other stories that may make them interested” and by planning fun, hands-on activities.

Right now, her civics and economics class is learning about how a bill becomes a law.

She spent Tuesday talking about filibusters, telling her students about different things members of Congress have talked about during a filibuster.

Wednesday, she had her students draw large flow charts of how a bill becomes a law.

She also teaches financial literacy, needs versus wants and supply and demand in the economics portion of her class.

“I try to make the classroom fun,” she said.

Rojo also makes sure her students know that she’s there for them.

Whether they have questions about her assignments or someone else’s; family problems; questions about college or even relationship problems, Rojo has an open door policy.

“I try to make it an uplifting environment,” she said.

She also makes sure to talk to all her classes, not just her honors classes, about college.

“Education is your way out,” she tells them.

Some of her students from her first year of teaching are now seniors and Rojo is helping them with scholarship applications and financial aid.

“I’m there for them more than anything,” she said. “I really, really do care.”

Rojo also uses her story as a way to talk to her son about the importance of education. Of course, he really doesn’t need much encouraging.

Although he’s in first grade, he reads on a second-grade level. He’s driven and competitive, and he has picked up his mother’s love of learning and history.

The 7-year-old is determined to go to Duke University, she said.

“He likes learning a lot,” she said. “He really wants to do well.”