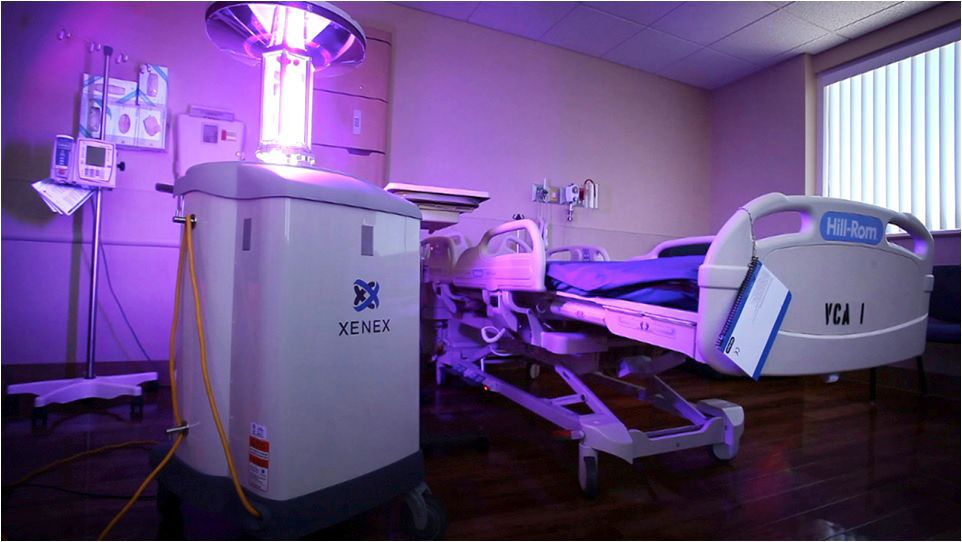 SALISBURY — When most people think of a hospital, they think of a clean, sterile environment. The W.G. (Bill) Hefner VA Medical Center has recently taken disinfecting to the next level by adding a new instrument to its arsenal of sanitizing techniques.
The medical center’s Environmental Management Service recently incorporated four new Xenex Automated Room Disinfection robots to ensure all areas of the hospital are as free of harmful bacteria as possible.
The Xenex robots use a pulsed xenon lamp to emit germicidal ultraviolet light to destroy deadly healthcare associated infection pathogens, such as Clostridium difficile (C. diff), MRSA, VRE and acinetobacter. Within a 5-10 minute cleaning cycle per room, this intense, broad-spectrum light kills harmful microorganisms safely and effectively.
Besides protecting patients from possible infections, the robots can also save tax dollars, as treating a single MRSA infection can cost thousands of dollars; by contrast, the Xenex system eliminates MRSA and other superbugs from VA patient-care areas for less than $3 per room per treatment cycle.
Jeffrey Tillman, environmental management supervisor, said using the Xenex robots doesn’t replace past cleaning techniques, instead, it enhances his team’s effectiveness.
“When we are cleaning, we wipe down everything a person touches, the bed, the floor, everything. Then we go in and wipe everything down again with soap and bleach,” he said. “After we do all of that, then we take the machine in and the xenon light kills any microorganisms that are left.”
“It doesn’t necessarily make our people’s jobs easier; but it gives an extra layer of security from infections. If anything is left after we’ve gone in and manually cleaned, this will kill it,” Tillman added.
Laura Hodge, environmental management services manager, said the Xenex machines also offer some safety features that others types of similar machines don’t.
“It detects motion and will stop if there’s any movement in the room during its cycle. If you were exposed to it though, because it uses xenon bulbs, it’s not going to hurt you,” she said. “They are also ‘greener’ than comparable systems. Other types of machines use a mercury bulb and this one uses a xenon bulb — it’s a brighter bulb and it’s not hazardous if it were to break.”