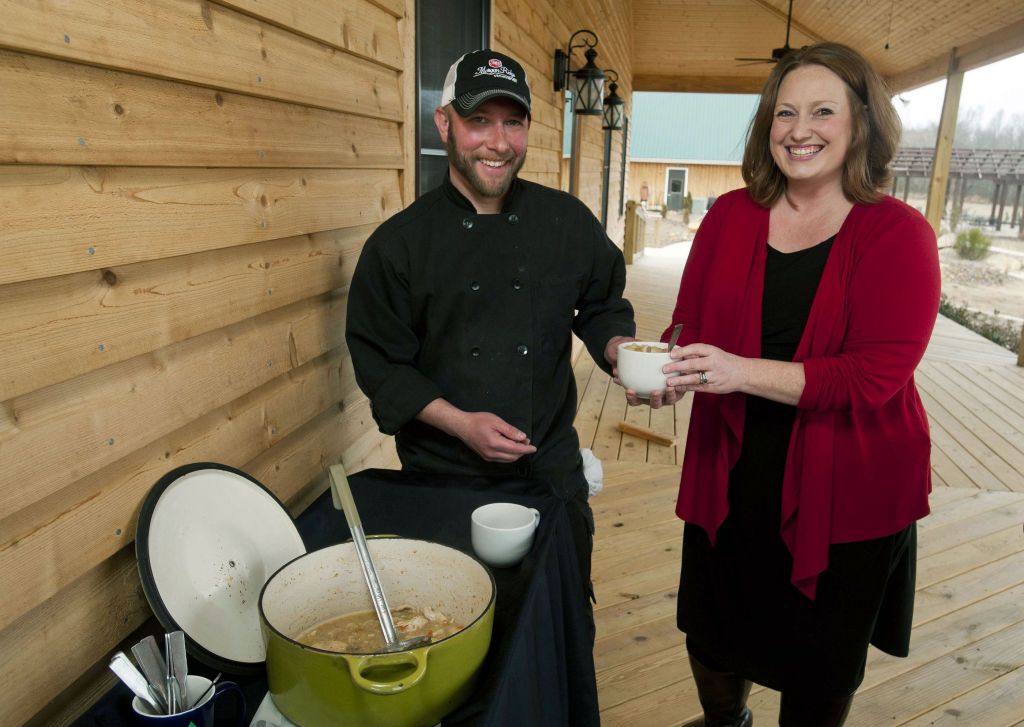 Editor’s note: The Post’s series, Someone’s in the Kitchen with Sarah, is evolving. Now that Sarah Campbell has taken a job at the Fayetteville Observer, we’re introducing a new feature called Kitchen Crashin’ with Tara Van Geons. The interactive sales specialist for the Post, Tara will be exploring her culinary side by visiting local restaurants, bars and hotspots — as well as people’s homes — to see how they prepare special dishes.

I put a call out on Facebook, and Capri Brixley responded almost immediately: “Chef Jason Nain with Morgan Ridge Vineyards…Bread Riot could secure some local goods for him to use in it, too!”

Within the hour, Capri contacted Morgan Ridge, organized a donation of local fare from Bread Riot and emailed me a confirmation.

Morgan Ridge Vineyards, Nain and Bread Riot were all on board. All I had to do was show up and learn how to cook something.

Morgan Ridge Vineyards, located less than a mile off of Stokes Ferry Road in Gold Hill, is an oasis of stillness and beauty. As I pulled into the driveway, I was greeted with a view of rows upon rows of vines, delicately draped over the landscape. A beautiful pond and a rock-lined waterfall are surrounded by the tasting room, patio, event space and a newly built amphitheater for music and weddings. From the top of the property overlooking the vines, the view of the Uwharrie Mountains is breathtaking.

Amie Baudoin, the owner of Morgan Ridge Vineyards, and Chef Jason Nain were awaiting our arrival.

Bread Riot has donated local crops and meat, and Nain decided to use the ingredients to cook a recipe very special to his heart: his Meemaw’s Chicken and Dumplings.

We began with Nain showing me how to cut chicken easily, at the joints. He did this so effortlessly. In my own kitchen, I usually feel as if I am wrestling with the chicken as it slips and slides around the cutting board. Nain sliced through joints as if he were slicing through butter. He then tossed the cut chicken into cold water and warned never to put chicken in warm water. “It’s like jumping into a hot tub!” said Nain. The outside gets scorched, while the inside remains cold.

He then put the chicken on the stove, in what he called “The Magic Pot,” brought it to a boil, and cooked it on high heat for 30 minutes.

While we waited for the chicken to cook, Nain began to dice onions and carrots in preparation for making the stock. He diced an onion so fast that there wasn’t any crying at all! After the chicken was cooked, Nain removed the pieces with tongs and put them on a plate to cool.

We then turned our attention to making stock with the boiling water adding carrots, onion, celery, salt, pepper, granulated garlic, granulated onion, Worcestershire sauce and hot sauce. Nain prefers Frank’s, but he encourages you to choose what you like. Just be sure to add it for a nice kick. The heat was turned back up on the stove and the broth boiled for about 10 minutes on medium heat.

Our next task was to make the dumplings.

“This recipes means a lot to me. It’s my grandmother’s recipe. We would make chicken and dumplings together,” Nain said. The rolling pin and cloth we used to roll out the dumplings belonged to his beloved Meemaw.

We mixed flour, salt, pepper, baking powder, egg and lard together in a mixing bowl. And I helped, ever so slightly, by drizzling buttermilk into the bowl while Nain expertly kneaded the dough. He formed it into a ball, tossed some flour around, plopped the mound of dough on the cloth, and handed me the rolling pin. When the dough was about a quarter-inch thick, he took a pizza cutter and sliced the dough into 1-inch pieces. He then took the dough pieces and gently tossed them into the boiling stock.

“You have to cook the flour out,” said Nain, and he recommends not stirring the contents. The dumplings cooked on medium heat for about 20 minutes.

We headed back to the chicken, which by then, was completely cooled. Rather than slicing the chicken with a knife, Nain took two forks, and shredded the pieces. Nain did not remove the skin from the chicken, but did say that it was a matter of personal preference. He then discarded the bones, and gently added the chicken to the dumplings to cook just long enough to warm up again.

It would be an understatement to say that the kitchen smelled heavenly.

“Why don’t you and Amie sit on the porch, and I will serve you lunch?” Nain said. He did not have to ask twice.

I attempted to be patient, but I could not wait to try this dish. Owner Amie Baudoin brought two wine glasses and a bottle of Morgan Ridge Vineyards’ 2011 Seyval Blanc.

Nain ladled out generous portions of Meemaw’s Chicken and Dumplings.

Nain casually leaned over, placed the back of his hand on his forehead, feigning exhaustion, and in the most gentile, Southern voice, exclaimed, “As God as my witness, you will never go hungry again!”

For more information about Morgan Ridge Vineyards, visit their website at www.MorganRidgeVineyards.com.

Bread Riot supports local and sustainable agriculture and cultivates a thriving local economy by facilitating a supply of locally produced food. Bread Riot’s annual fundraiser, Riot in the Pasture, will held at Morgan Ridge Vineyards on Sunday, May 18. Visit www.BreadRiot.org.

Pinch of salt and pepper

Put the chicken cuts in 1 gallon of cold water and cook on high heat for 30 minutes. Remove chicken and let cool. Do not discard the boiled water. When chicken is cooled, shred chicken with a fork and discard bones. Sprinkle chicken with a pinch of salt and a pinch of pepper. Set aside.

Mix flour, salt, pepper, baking powder, egg, and lard together in a mixing bowl. Beginning at the center mound, drizzle buttermilk slowly while mixing with your fingers, gradually incorporating all the buttermilk. Knead dough and form it into a ball. Dust flour on a clean work surface and just a little flour on the dough itself. Roll out the dough, which will be a bit firm, until about Ľ inch thick. Using a pizza cutter, cut dough into 1-inch pieces. Place dumplings gently (away from you) into the boiling stock. Cook on medium heat for about 20 minutes, until the flour is cooked out and the dumplings are no longer doughy. Do not stir.

After dumplings are cooked, gently add the cooled chicken to the pot. Cook on low heat just long enough to warm the chicken. To serve, ladle into warm bowls. Pair with Morgan Ridge Vineyards’ Seyval Blanc 2011 or a light, crisp white wine of your choice.