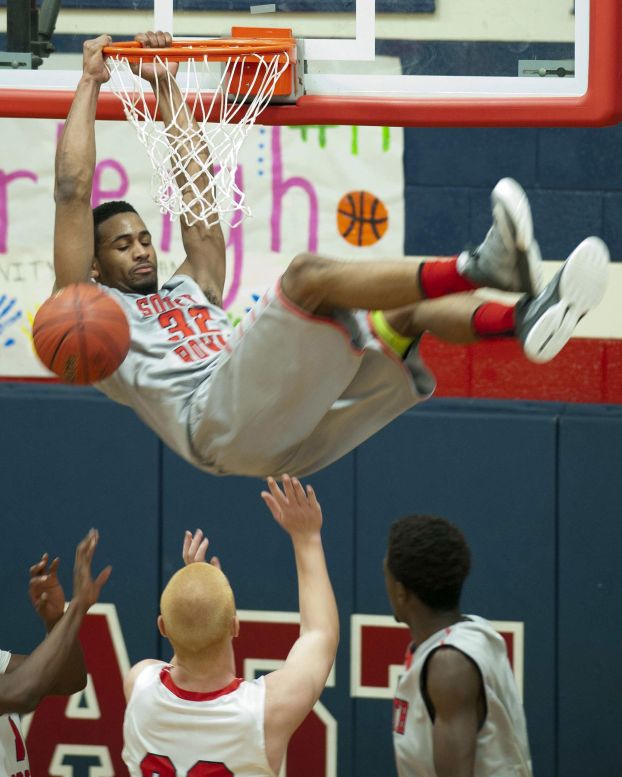 GRANITE QUARRY — South Rowan senior T’Vadis Graham-Wesley threw down three dunks and scored 22 points on Monday, and his offense still couldn’t keep pace with his defense.
“He blocked so many shots, changed so many shots, got so many deflections, it was unreal,” East Rowan coach Trey Ledbetter said. “We allowed him to have a stellar game. He’s an energy guy, and when’s he’s dunking like that, he gives his team energy.”
With snow piled on top of six straight losses, South hadn’t won a game since Jan. 17, but the Raiders managed to beat East 62-53 in a regular-season finale.
“I was glad to do the things I did, but the dunks and the blocked shots don’t mean much if you don’t win,” Graham-Wesley said. “We knew it would be a battle on East’s Senior Night, but I just really wanted to win. I wanted to end that losing streak.”
It was a season-ender for East (4-18, 2-12), which at least concluded 2014 on a high note — a thanks-for-the-memories dunk by senior Dock Corpening.
East finished ninth in the SPC and didn’t qualify for the league tournament.
South’s reward for finishing eighth is a trip to top-seeded Concord tonight for a 7:30 game in the SPC tournament, but at least South (9-14, 5-10) is still playing. As long as you’re playing, miracles can happen.
Graham-Wesley got help from Shawn Spry (14 points), Qwan Rhyne (11 points and a solid floor game) and Christian Holbrook (10 points). Lavon Hill was foul-plagued early but impacted the rebounding battle in the second half.
“We played in a spurts again, and I really don’t understand that, but there were stretches when we were good,” South coach Bryan Withers said. “This team is pretty good at times.”
Austin Love scored 17 for East. Senior Donte Means had 16. There’s no doubt the moments of truth in the game came in the third quarter.
Seth Wyrick made a trey to get East close, and then Means buried a jumper to give East a 28-27 lead.
“We had the lead and we had our mojo back, and I thought we’d play well from there,” Ledbetter said.
But Graham-Wesley scored on a putback on South’s biggest possession to regain the lead. Then Hill hit two free throws. When Rhyne drilled a jumper, South had regained command.
“That was good,” Withers said. “We faced a little adversity there, and that’s been the tough thing for this team — not to bow our heads when things go bad. This time we dug in. I was proud of that.”
In the fourth quarter, Spry hit two 3s, Holbrook and Graham-Wesley knocked down their free throws, and the losing streak was history.
“We played as hard as we could for our seniors,” Love said. “But South can play, and T’Vadis had some big dunks.”
SOUTH ROWAN (62) — Graham-Wesley 22, Spry 14, Rhyne 11, Holbrook 10, Hill 4, Littlejohn 1, Wilder, Finger, Rary, Stewart, Childers, Goldston.
EAST ROWAN (53) — Love 17, Means 16, Se. Wyrick 10, Sa. Wyrick 6, Corpening 2, Moses 2, Bell, Weisensel
S. Rowan 12 13 14 23 — 62
E. Rowan 6 13 17 17 — 53