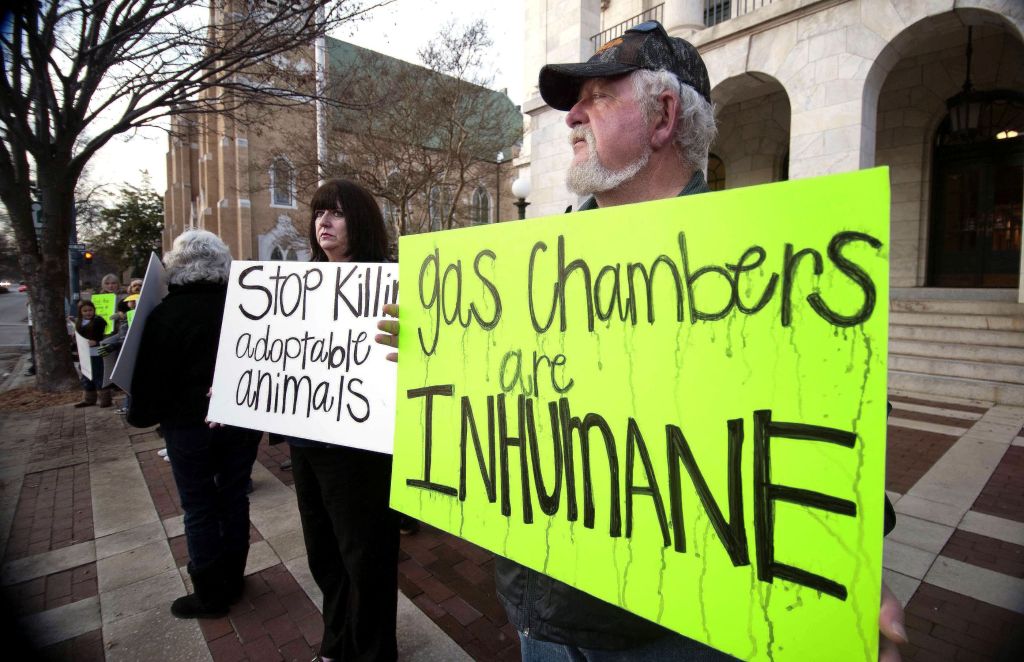 One sign being hoisted up Monday outside the J. Newton Cohen Sr. Rowan County Administration Building featured a bold swastika accompanied by the words, “You are no better.”

Another read, “Would you allow your children to die gasping for air?”

Dozens of demonstrators ranging from nine-year-olds to senior citizens – and dogs – turned out at 4:30 p.m. Fix Rowan rally prior to the Rowan County commissioners’ second monthly meeting detesting the county’s use of the gas chamber at the shelter as well as raise awareness of the plight of a dead beagle-lab mix named Bandit.

Bandit was euthanized in the shelter’s gas chamber in January following an alleged mishandling at the hands of an animal control officer following being struck by a vehicle.

The dog’s right eyeball was hanging out, his hind legs were useless and blood was coming out of his mouth.

“This is about the incident that happened with Bandit when he obviously was mishandled by animal control in an inhumane manner, and then taken back and gassed at the animal shelter,” said Jane Felts, a member of Fix Rowan, the local animal advocacy group supporting a no-kill approach for adoptable pets at the shelter. “We feel like there are a lot of residents that don’t really know about what is going on at the animal shelter and what they are paying for.”

Several drivers on West Innes Street honked their horns in support of the demonstrators while others turned their heads sitting at red lights.

“We’re in the ten of the one hundred (counties) who still use the gas chamber. The other 90 (counties) either never used it or have done away with it,” Felts said. “It’s disgusting and embarrassing, because even if people don’t realize it – the whole world knows what is going on here.”

Felts said Fix Rowan will not go away until “Rowan is fixed.”

Toting a sign denouncing the gas chamber, Fix Rowan Member Mandy Nance said the gas chamber is barbaric, causes animals to suffer and costs twice as much as using lethal injection to put animals down.

An animal should not have to pay because it was born by having to suffer in the gas chamber, Nance said.

“A no-kill approach would be ideal, but in the meantime, the gas chamber can be removed (today). There is a grant from the Humane Society where they would pay the cost and actually help them take (the gas chamber) out,” Nance said.

Ridgell was the first of a few speakers stepping to the podium during the meeting’s public comments section who vehemently urged commissioners to do away with the gas chamber and conduct a thorough investigation of Bandit’s incident.

“Bandit was not humanely euthanized there on the spot. He was taken up by the catch pole, jerked up off the asphalt yelping in pain, slung in the cage in the back of the animal control truck and hauled to the animal shelter,” Ridgell said. “Distraught I was. My husband practically carried me back to the truck.”

Ridgell said she thought Bandit would be humanely put out of his misery once back at the animal shelter.

“He wasn’t. Bandit was gassed to death – against the law in North Carolina,” Ridgell said. “This needs to stop. Nobody can speak for our four-legged babies except their human parents.”

Following the comments, commissioners did not discuss any matters relating to the shelter, the shelter’s gas chamber or Bandit’s incident.