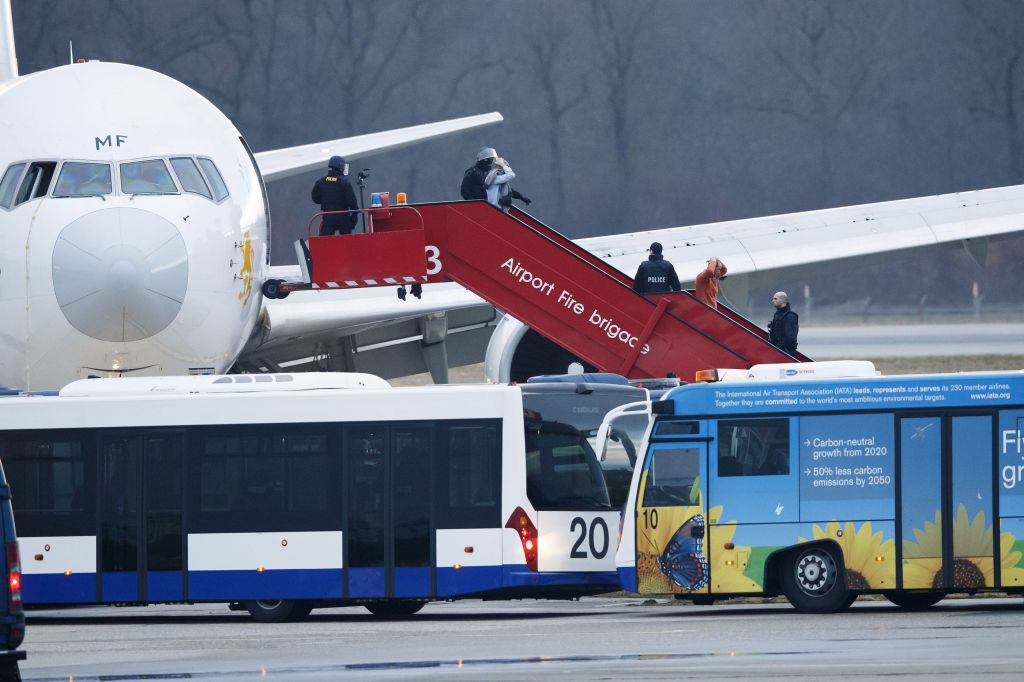 GENEVA (AP) — It seemed like a routine overnight flight until the Ethiopian Airlines jetliner went into a dive and oxygen masks dropped from the ceiling. Only then did the terrified passengers — bound for Italy from Addis Ababa — realize something was terribly wrong.
The co-pilot had locked his captain from the cockpit, commandeered the plane, and headed for Geneva, where he used a rope to lower himself out of a window, then asked for political asylum.
Authorities say a prison cell is more likely.
One passenger said the hijacker threatened to crash the plane if the pilot didn’t stop pounding on the locked door. Another said he was terrified “for hours” Monday as the plane careened across the sky.
“It seemed like it was falling from the sky,” 45-year-old Italian Diego Carpelli said of the Boeing 767-300.
The jetliner carrying 200 passengers and crew took off from the Ethiopian capital on a flight to Milan and then Rome, but sent a distress message over Sudan that it had been hijacked, an Ethiopian official said. Once the plane was over Europe, two Italian fighter jets and later French jets were scrambled to accompany it.
Italian Air Force Col. Girolamo Iadiciccio said the order to scramble came from NATO to ensure the plane didn’t harm national security and didn’t stray off-route.
The plane landed in Geneva at about 6 a.m. Officials said no one on the flight was injured and the hijacker was taken into custody after surrendering to Swiss police.
“The pilot went to the toilet and (the co-pilot) locked himself in the cockpit,” Geneva airport chief executive Robert Deillon told reporters. He “wanted asylum in Switzerland.”
It wasn’t immediately clear why he chose Switzerland, where Swiss voters recently demanded curbs on immigration. However, Italy has a reputation among many Africans as not being hospitable to asylum seekers.
Ethiopian Airlines is owned by Ethiopia’s government, which has faced persistent criticism over its rights record and its alleged intolerance of political dissent.
The co-pilot was identified as Hailemedhin Abera, a 31-year-old Ethiopian man who had worked for Ethiopian Airlines for five years and had no criminal record, said Ethiopia’s communications minister, Redwan Hussein, adding that Ethiopia will seek his extradition. Geneva police said he claimed he felt threatened at home.
“His action represents a gross betrayal of trust that needlessly endangered the lives of the very passengers that a pilot is morally and professionally obliged to safeguard,” Redwan said.
One passenger, Francesco Cuomo, told the Italian news agency ANSA that he and other passengers woke up shortly after midnight when the plane started to “bounce.”
“The pilot was threatening (the hijacker) to open the cockpit door and tried to knock it down without succeeding,” said Cuomo, a 25-year-old economist from Italy.
“At this point, a message was transmitted by the loudspeakers in poor English, but the threat to crash the airplane was clearly understood,” he added.
Oxygen masks then came down, making everyone on the plane very tense.
“We got scared because we saw these (oxygen masks) come down and the voice of the pilot, that usually is friendly and mellow, was cracking and worried, saying, ‘Breathe with the oxygen masks! Sit down!’… Then the plane fell sharply two times,” Italian passenger Paola Casale told The Associated Press.
“I thought that the co-pilot had gone nuts,” Cuomo told the Corriere della Sera newspaper, adding that “there was a lake below us, and so we suspected that we weren’t landing in Milan.”
“I realized we weren’t in Italy any longer when I recognized the Alps,” he said. “When we started circling above Geneva, we were really afraid.”
Carpelli said he and his family, returning to Rome from a vacation in Kenya, “had no clue about the hijacking but got scared when the plane suddenly started diving.”
The co-pilot later threatened to take away passengers’ oxygen if they tried to leave their seats.
“‘If you’re not sitting down and belted, I’ll take away your oxygen,”’ passenger Serena Berti quoted the hijacker as saying. She spoke with Italian state TV by phone from Geneva.