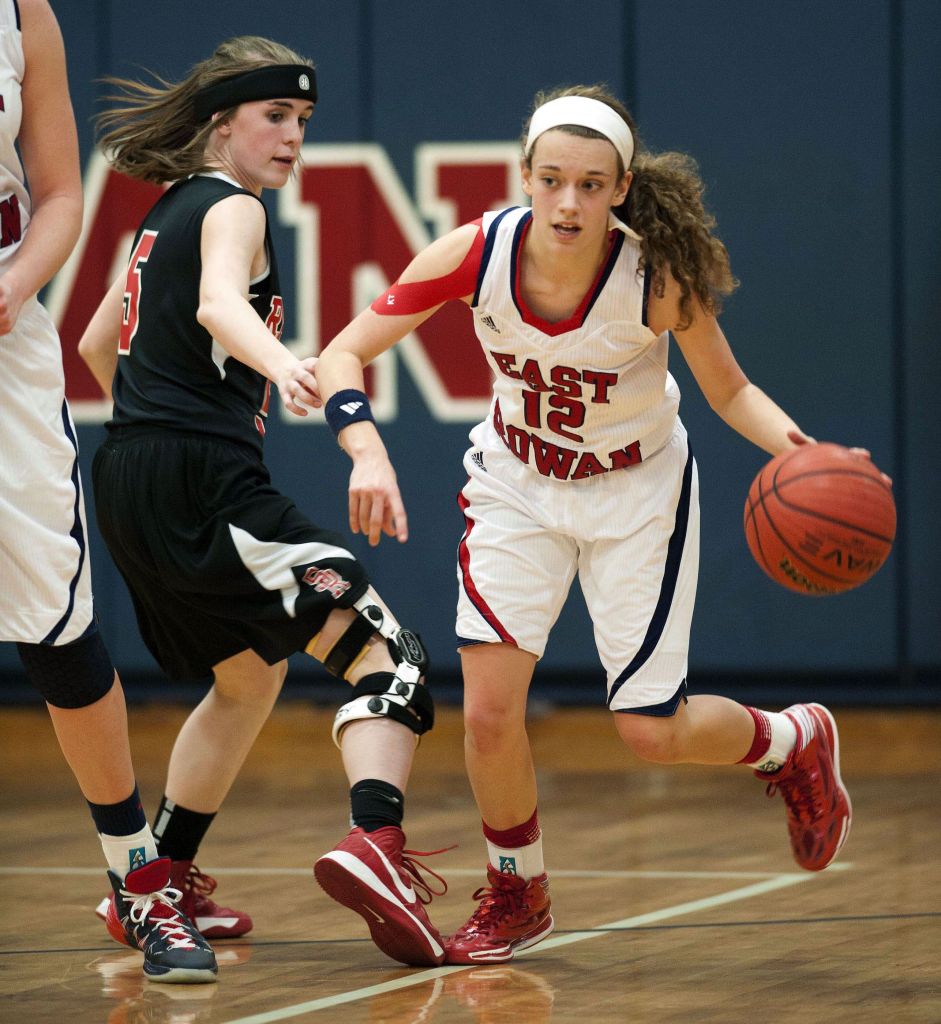 GRANITE QUARRY — East Rowan’s girls had to wait five long weeks for redemption, but they got it Monday in a 61-51 Senior Night win against South Rowan to close the regular season.
SPC champ East’s 61-44 loss at runner-up South (14-8, 11-4) on Jan. 10 marked the low point of the season for the Mustangs (19-3, 15-1), but they haven’t lost since.
“That loss made us better and there are times you need that tough loss to get better,” Porter said. “Chemistry-wise that loss to South took us to another level, and we re-committed ourselves in a lot of ways. We had to be very good to win tonight. South is a great team. They’re nothing to sneeze at.”
East won its ninth straight while stopping South’s eight-game winning streak.
“We fought very hard,” South coach Jarrod Smith. “In spurts, we were good, but we just didn’t put it together as well as we have been.”
South-East is a battle of contrasting styles. The Mustangs rely on post scorers Karleigh Wike (6-foot-4) and Kelli Fisher (6-3), while South gets its points from juniors Avery Locklear and Cassidy Chipman, who are mostly perimeter players. Locklear and Chipman entered the game as the county’s top two scorers.
Wike (20) and Fisher (18) were basically a standoff with Locklear (20) and Chipman (16).
The difference was the 13 points scored by East sophomore Shenell Pharr, who got 11 of her points in a decisive flurry.
Pharr was Shen-sational. When Locklear made two free throws late in the third quarter, South trailed 36-35 and had momentum, but Wike made a free throw and Pharr had a huge steal and bucket as the quarter closed.
“Shenell is so intense on defense and so quick,” Porter said. “When she gets a deflection or a tip-out, she’s going to be the first one down the floor. She was very mature tonight, especially at crunch-time in a big game, where it’s easy for a young player not to be.”
East kept it going in the opening minutes of the fourth quarter, with a burst that decided the game. Fisher scored on a putback to make it 41-35. Then Pharr knocked down a 3-pointer — East’s first of the game . Then Pharr sprinted for an easy transition bucket, and the Mustangs led by 11.
Lynsey Corriher scored to stop the run, but when Pharr responded with another treyfrom the right side, the Mustangs were headed to victory.
“I just wanted to play for the seniors and win for the seniors (Wike and Lauren Thomas),” Pharr said. “I did make some shots, but defense was the biggest thing tonight. That’s what I work on.”
Chipman splashed four 3s, and the Raiders welcomed back Caroline Hubbard, who has been out since November with a broken collarbone.
Still, East was determined not to lose again to a rival.
“I was really proud of our guards’ defense,” Wike said. “Avery and Chipman still hit a lot of shots, but we played them tough. We rebounded really well as a team, and Shenell was just amazing,”
Jocelyn Lowe had eight assists for East. Fisher and Wike combined to haul down 28 rebounds. Chipman had 10 rebounds for South, and Sylvetta Bost had five assists.
“What we have to do now is get over this one fast,” Smith said. “If we win two games, we can play East again on Friday for a championship.”
East is home tonight at 7:30 against NW Cabarrus in the first round of the conference tournament. South is home at 7:30 against West Rowan.
SOUTH ROWAN (51) — Locklear 20, Chipman 16, Corriher 6, Bost 4, McClendon 3, Hubbard 2, Martin.
EAST ROWAN (61) —Wike 20, Fisher 18, Shenell Pharr 13, Thomas 4, Lowe 3, Ajayi 3, Shenique Pharr, McCree, Benge .
S. Rowan 11 11 13 16 — 51
E. Rowan 14 14 11 22 — 61