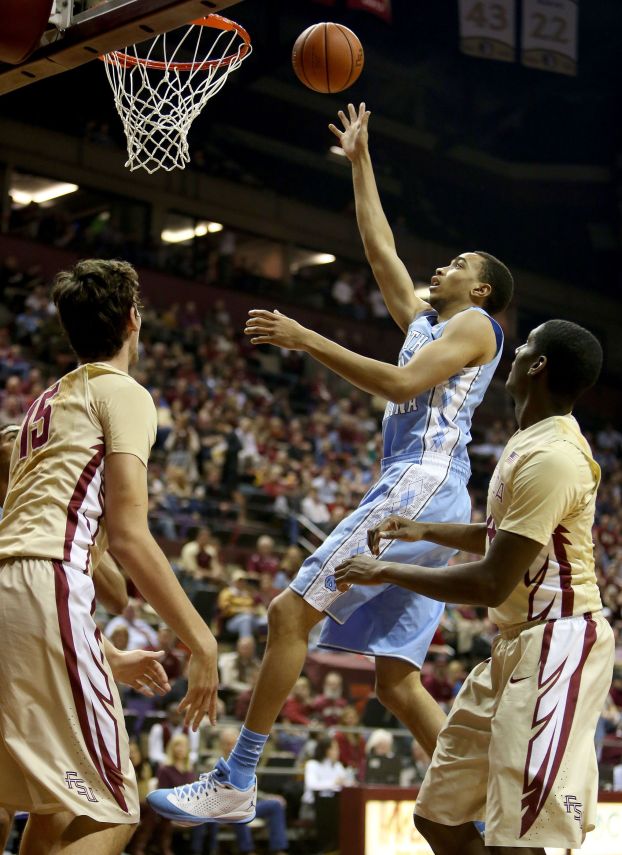 TALLAHASSEE, Fla. — North Carolina faced an unlikely 15-point deficit with one of its top players having an off night against Florida State on Monday. Maybe just as unlikely was Kennedy Meeks stepping up to save the day.
Meeks, a freshman, scored a career-high 23 points as North Carolina rallied for its biggest comeback of the year with an 81-75 victory against the Seminoles. The Tar Heels (18-7, 8-4 ACC), extended their season-high winning streak to seven.
“He started probably five or six games for us, but hadn’t played very well the last two or three games,” North Carolina coach Roy Williams said. “He does give us some inside scoring and I think a huge part of it, too, was our guys passing it to him inside, bounce passes inside.
“He was big for us.”
James Michael McAdoo, who had scored double figures in 17 consecutive games, fouled out without a point. It was the first time the junior was held scoreless since his freshman year.
Roy Williams earned his 300th win at North Carolina and passed former Tar Heels coach Dean Smith as the fastest to reach 300 ACC wins. Williams did it in 386 games, while Smith needed 406.
“I’ve lived a blessed life on the basketball court,” Williams said. “It’s been a lot of fun. Hopefully I’ll have another win.”
Florida State (15-11, 6-8) switched up the starting lineup with its NCAA Tournament chances dwindling after losing 6 of 9. Ian Miller made his first start of the season and led the Seminoles with 22 points, including five 3-pointers. His hot shooting out of the gate helped give Florida State a 21-6 lead. Montay Brandon finished with career-high 18 points and Aaron Thomas added 16.
“It was pretty bizarre how quick they can out,” North Carolina guard Marcus Paige said. “You know Ian Miller was on fire, a couple of times I thought I played good defense on that. Those things happen.
“It is a long game, a 40 minute game. We were able to grind it out.”
North Carolina started just 2 for 13 from the field, but closed the first half with a 27-15 run with Meeks taking over inside. Florida State’s size, Okaro White, Michael Ojo and Boris Bojanovsky, played a combined 17 minutes in the first half because of foul trouble and Meeks stayed aggressive. He scored 13 points in the first half, including the last eight North Carolina points before the half. The Tar Heels scored 50 points in the paint.
Paige took over in the second half and scored 16 of his 20 points as the Tar Heels continued to walk down the lead. Nate Britt hit a baseline jumper to give North Carolina its first advantage of the game at 57-55 with 10:05 left to play.
“At first we were all getting discouraged because nothing was going right for us,” Meeks said. “As the game progressed, the team stuck together. I think we gained more confidence and that is what allowed us to make those defensive and offensive plays.”
The Tar Heels led 70-69 when J.P. Tokoto came up with a loose ball and turned it into an easy two-hand dunk. Meeks then put in a layup off a Paige dribble-drive and dish to go up 74-69. Florida State never recovered.
The Seminoles have now lost 7 of 10.
“We got beat by a team that had a little more firepower than we did,” Florida State coach Leonard Hamilton said. “It was just too tough for us to overcome.”