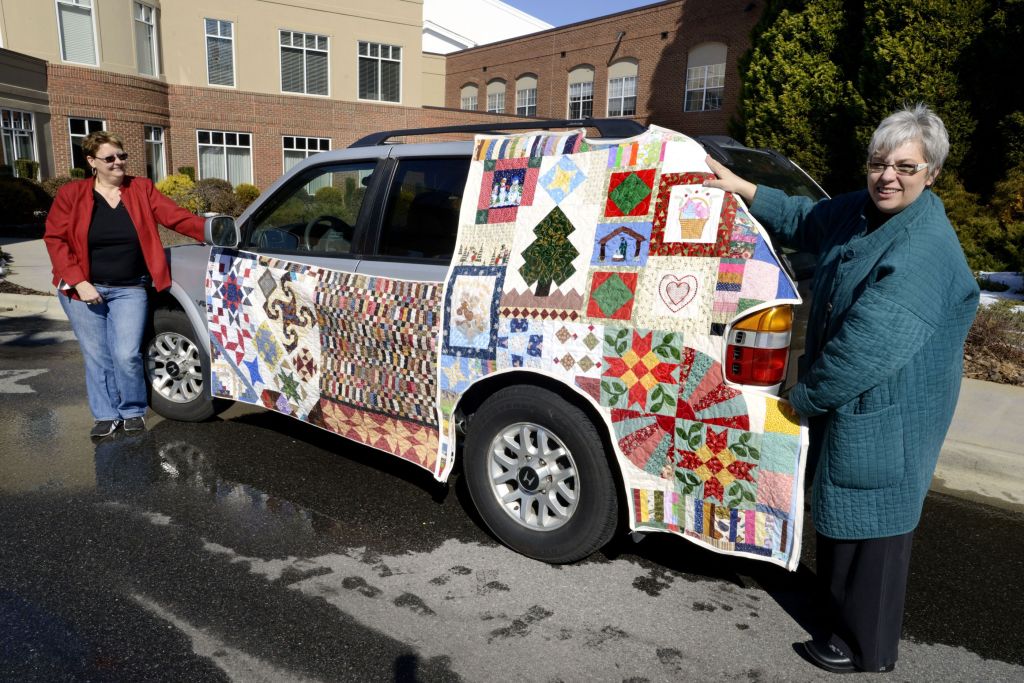 Jim Whalen used to go to quilt shows with his wife, Annette. Then, he took up quilting.

“Now, I buy more material than she does,” Jim said Sunday.

Jim had a half-dozen quilts on display at the 30th Annual Quilt Show. The event is being held in the special events room of Trinity Oaks Retirement Center, and continues today and tomorrow, 10 a.m. to 4 p.m.

Jim uses old T-shirts as the centerpiece for his quilts. He uses a long-arm machine to create stitch designs manually.

“I just kinda started playing around with it,” he said. “I made mistakes and tried not to do it anymore.”

He works part-time, and quilts the rest of the time, his wife said. Annette made clothes for their daughter, and eventually took a quilting class.

“When our daughter got married, she wanted a comforter set,” Annette said. “I thought that was too impersonal, so I made a king-sized quilt for her, and I’ve been quilting ever since.”

And their daughter still has that quilt, Jim says.

Lest you think the couple works in a crowded craft room, don’t despair. Jim converted their two-car garage into a quilt studio. Plenty of room to make those king-sized quilts.

The Whalens’ seven quilts — Annette displayed an intricate Autumn Leaves quilt — brought the show’s total to an even 100.

With quilts spread over chairs, on tables and on frames in the spacious special events room, there were plenty of oohs and aahs throughout the afternoon among the good number of residents and community members who attended the show.

Resident Lois Carter, who is recovering from a recent surgery, walked through with Deana Burris, Trinity Oaks’ wellness director who is Lois’ physical therapist.

“We incorporated this as part of our therapy,” Deana noted.

Lois said she had been a quilter, making a quilt for each of her four children.

There were plenty of familiar patterns to be seen: Log Cabin, Around the World, Dresden Plate, and so many more.

There were quilts dating to the 19th century. Laura Carmean rescued one treasure that she thinks was made in the 1840s. The pattern is similar to Diamond in the Corner. Teresa and Andrew Pitner own a Star pattern quilt on display. It dates to 1875. A photo of Martha Elmira Berry, Andrew’s ancestor who made the quilt, sat atop it.

And there were plenty of contemporary quilts. Jim completed his quilt with the red M&M character in the center last weekend.

The quilters’ guild is participating in two service projects, making lap quilts for area veteran volunteers, and twin-size quilts and cuddle quilts for the Battered Women’s Shelter. They plan to give away at least 20 veterans’ quilts during the upcoming show, Shelley said.