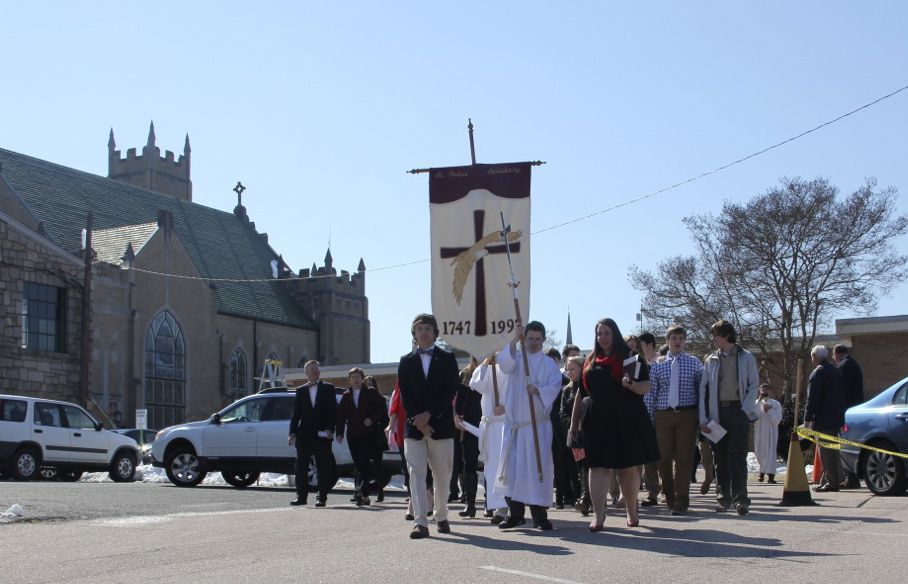 “For we are God’s servants, working together; you are God’s field, God’s building.”
— 1 Corinthians 3:9

By Susan Shinn
For the Salisbury Post
Looking to the past and to the future, St. John’s Lutheran Church on Sunday broke ground on a $5.9 million building for contemporary worship, youth programming and community gathering.
Some 417 people attended an 11 a.m. Unity Service, at the conclusion of which the congregation walked to a grassy knoll behind the education building. Davey Rhodes carried the cross, Christopher Derrick carried the St. John’s banner, and a large contingent of youth enthusiastically led the rest of the congregation.
“It’s a glorious day,” said Mark Lewis, who chaired the building campaign committee. “It’s a day full of promise to our young people and to our community.”
In his sermon, the Rev. Rhodes Woolly, senior pastor, outlined the seven building projects that have taken place in the life of the congregation, since its founding in 1747.
Plans for the current sanctuary began back in 1923, and ground was broken for that building in 1925. Minnie Grabowski was 5. She doesn’t remember too much about it, but she does remember going into the new sanctuary.
On Sunday, Grabowski, now 93˝, was part of the group who turned the softened earth with golden shovels.
“I felt really honored when Pastor asked me to be at the groundbreaking,” Grabowski said. “I just felt so good and so proud to be in that group.”
Other members of the group were Lewis, Mike Agee and Franco Goodman, building campaign leaders; Woolly; Danielle Kosanovich, minister for youth and outreach; Rob Durocher, minister of music; the Rev. Phil Tonnesen, a bishop’s assistant from the North Carolina Synod; Barbara Rufty, a participant in the 1966 groundbreaking for the chapel and education building; Shirley Ritchie, a participant in the 1999 and 2004 groundbreakings for the St. John’s Child Development Center; Camille Butner, representing the contemporary worship service; Jordan Smith and Robert Sullivan, the congregation’s newest Eagle Scouts; Mayor Paul Woodson; Carl Carney, president of Davie Construction, which will build the new facility; and architect Gray Stout.
“It’s been a joy to work with everybody here,” Stout said after the service. “You can’t grow up in Salisbury and not have contact with St. John’s.”
So many people have had contact with this project already.
As Woolly wrote in the commemorative bulletin, “Today’s groundbreaking ceremony is the culmination of a nearly seven-year dream to build youth, community and contemporary worship space that meets the needs of our growing congregation. Participants in today’s worship and ceremony represent the hundreds of volunteers who have graciously given of time and resources to make this dream a reality. As we break ground, we pray for God’s continued guidance as we pursue his mission in this place.”
Last week, Woolly noted that the investment by St. John’s was part of a nearly $16 million investment with two other congregations in Downtown Salisbury in the last few years.
In 2006, First Presbyterian Church completed a $6 million Family Life Center. In 2011, First Methodist Church completed a $4 million addition that includes a handsome covered entrance at the corner of Fisher and Church streets, gathering space, a multipurpose room, a new music suite and mini concert hall, and renovation and addition of classrooms.
“We’ve chosen to invest in downtown because we believe in downtown,” said the Rev. Stephen Haines, First Methodist’s senior pastor.
The same is true two blocks away at St. John’s.
“Churches are willing to lead the way toward investing beyond buildings,” Woolly said. “This building is only a tool toward the overall vision of a future ministry that is very bright. I can think of no better investment in the future of this congregation and this community.”
“We like to see our downtown prosper,” Woodson said after the service. “This new building will mean so much to so many people. I go to a lot of churches, and this is one of the best.”
The church’s young people are especially excited about the project, because it will bring about expanded space for their growing program, Kosanovich said. When asked to write about what St. John’s means to them, some of their responses included: “It gives me a place of belonging.” “It’s my second home.” “It’s better than chocolate.”
“These young people have experienced God in this place,” Kosanovich said. “But I’m praying for my friends who do not yet know the story. We’re not just turning dirt for a building. We’re extending the story of God.
“Come in, come as you are, come and hear the story of God, because it’s better than chocolate, I promise.”
Woolly ended his sermon with these words: “I stand before you today as the 31st senior pastor of this congregation. And like all those before me, I say with confidence that this church is built on solid ground, with its firm foundation in Jesus Christ. For we are God’s servants, working together. In this community is God’s mission field — God’s frontier. And in you, God is building his kingdom for all the world to see.”
Susan Shinn is communications assistant for St. John’s Lutheran Church.