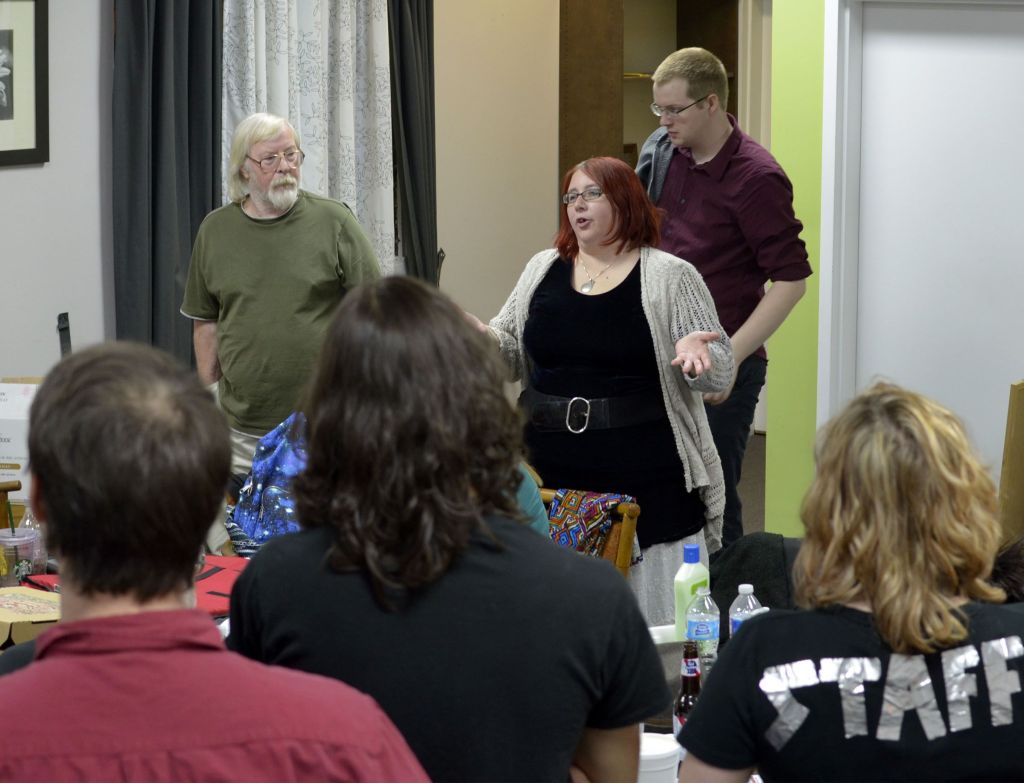 SALISBURY — Friday, 10 minutes before 8 p.m., Sam Post is in the lobby of the Spoken Space Theatre on Lee Street.

It’s almost time for the Laugh Tracks comedy show to start. The cast is backstage, but the theater is slow to fill.

Post, a local writer and filmmaker, had the idea to form a local comedy ensemble last year. In November, he and a group of writers and actors got the ball rolling.

The audience trickles in slowly, which Post said is expected — after all, it’s Valentine’s Day and people are just getting out of their houses after the snow.

But once they get settled and the show begins, the crowd gets into it.

Sitting down on the sofas and loveseats that make up the audience seating, they laugh along with the opening sketch: Salisbury Home Shopping, a TV shop-at-home channel that offers, among other things, leopard-print boots.

Just one problem: the boots aren’t quite ready yet. Turns out, the company sent actual leopards, which are heard offstage mauling the crew.

From there, the sketches roll on. Some get bigger laughs than others.

The “Jerry Springer” sketch ends with slapstick, like a “Three Stooges” sketch gone haywire that has the crowd clapping and chanting “Jerry! Jerry!” just like on TV.

Others, such as an interview with upper-crust “doomsday preppers,” make fun of trends in popular culture, and get chuckles throughout.

The spoof of disaster-preparedness has a well-dressed couple sipping red wine on a talk-show set, nonchalantly describing how they’ve put illegal aliens into suspended animation.

They’ll thaw them out, they say, to be their servants after the coming apocalypse.

Some of the sketches are edgy, to say the least — and a few involve topics that can’t be described in a family newspaper.

If this sounds like a familiar format, that’s because it’s supposed to be, said head writer Rick Godby.

He said the whole idea was to use the tried-and-true model of NBC’s “Saturday Night Live,” right down to the “Slow News Day” segment which riffs on the week’s news stories.

“And like SNL, some nights it’s not going to be belly laughs, but they’ll hear some cool music, see some cool videos and go home entertained,” Godby said.

What ties it all together, director and show runner Chuck Carte said, is that both the format and the material are relatable.

Laugh Tracks bills itself as “comedy off the rails,” and the team is pushing the envelope with a style of comedy that they say has never been done in Salisbury before.

“This is our sixth week of doing shows, seven if you count rehearsal shows,” Carte said, talking backstage after the show with cast and crew.

The cast of Friday’s show, 10 men and women, is a melting pot of ages, races, sexual orientations and religious backgrounds.

The folks who perform with Laugh Tracks include working professionals and parents, and at least one full-time college student.

Janna Murr found out about Laugh Tracks from Carte, who used to teach drama at her high school in Stanly County.

Today, Murr is a student at Stanly Community College, working on an associate’s degree.

Not only does she act, she’s also the stage manager.

Backstage before the show, Murr helps get all the props in order.

On stage, she portrays a news anchor, a saleswoman and a lovestruck plane-crash survivor.

“As a stage manager, this cast is great, and as an actress, I love the people, all around,” Murr said.

For some, it’s a family affair. Sharon Earnhardt, her “significant other” Bob Paolino, and her son, Shafiq Moujahed, are all on cast.

The jokes are an eclectic mix, too — some are on general topics, and others are more local.

In the “Doomsday Preppers” sketch, the wealthy characters talk about draining High Rock Lake to supply them with water.

Another video segment was a pretend tourism commercial for the town of Spencer, with every scene coming back to a reference to trains.

Carte said that the show has started to bring in audience members from outside of Rowan County.

And there are plans to bring in musical guests from all around the region.

In the new installment of “Rowan Hillbillies,” Dustin Stewart goes up to a makeshift podium, wearing glasses and a coat and tie.

He’s portraying Rowan County Commission Chairman Jim Sides, who — with the help of a robed choir director, played by Samuel Earnhardt — leads the audience in singing “What a Friend We Have in Jesus.”

A public hearing ensues. Cast members, portraying citizens, rise to complain about the way Sides is doing his job.

Stewart, as Sides, calls henchmen dressed in black to drag them away, as the sounds of blows are heard from offstage.

A previous “Rowan Hillbillies” sketch, in which Sides and fellow commissioners try to decide what to do with the newly-purchased Salisbury Mall, has been watched over 600 times on YouTube.

Church said “it’s hard to laugh” at the Rowan Hillbillies sketch, not because it isn’t funny, but because many disagree with the local government’s actions.

Asked why Sides and county government are topics of humor, Post said he believes that some of what local lawmakers are doing is worth laughing at.

“The things they have done upset so many people,” Post said.

“If it was national, there would be jokes about the state legislature, the governor, on late night TV.”

Some, but not all, sketches include jokes or references to sex.

Backstage after the show, when asked whether their show is ever family-friendly, Stewart said, “For the Addams Family, maybe.”

“We don’t know where our limits are until we go there,” Moujahed said.

“We’ve had some knock-down, drag-out arguments over some of the ideas,” Post said.

Hutchins said that part of the challenge had been “learning the community” of Salisbury, and what people here will and won’t tolerate.

She said one sketch involving Jesus was nixed because the consensus was that it went too far.

At the same time, one of this weekend’s sketches included a Christian puppet show where the entertainment gets put on hold while the male and female puppeteers argue about their disintegrating relationship, including their sex life.

Even so, Post said, there’s room in Salisbury for this type of humor.

“What inspired me to start this is that we take things very seriously,” Post said — and the time had come to have a venue for more edgy comedy in Salisbury.

Controversial or not, Carte said, “Jim Sides, as long as he’s an elected official, will always be a mainstay of the show.”

“Everybody has their own county commissioners … There’s shades of Jim Sides in a lot of the politicians I grew up with,” Carte said.

“We got 10 or 12 good actors back there, and a couple of awful ones, too,” Church told the audience as Friday’s show got underway.

The show is still finding itself. This week, what with snow and illness, there were a lot of adjustments at the last minute.

A casting call is being held this week to bring in more actors, Carte said.

Previous stage experience is not required. The goal is to have more people involved so that the cast can rotate from week to week.

Carte praised what he called one of the best casts he’s ever worked with, and “the commitment, the talent and the perseverance of this group.”

For Paolino, who has a background in theater, the joy has been watching the cast evolve.

“Not just say your lines, but really grow and develop a character,” Paolino said.

Meanwhile, Hutchins said, the show’s writers and directors have plenty of ideas waiting to run.

Sitting in the Spoken Space Theater after the show, Carte said, “I always saw this not just as an art gallery, but as a space to create, be it traditional art or performance art.”

Since November, Carte said, he’s been pleased with how Laugh Tracks has grown, and what it offers the community.

And, like the train that’s on their logo, they say it’s going to be hard to stop what they’ve started.