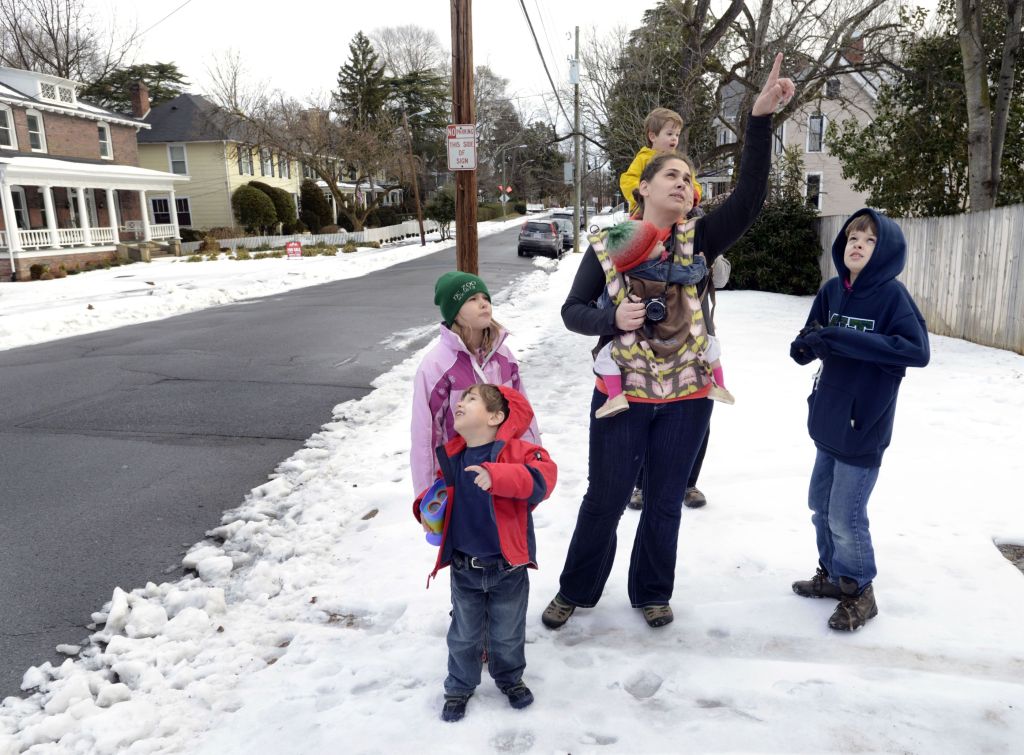 SALISBURY — When the Cooper’s hawk high in the pine tree on South Ellis Street refused to turn around Saturday and greet the birdwatchers below, 10-year-old Cai Reymond mustered up his best hawk call.
After several enthusiastic attempts, Cai’s call worked. The hawk turned, looked and was officially counted as part of the Great Backyard Bird Count, an international four-day project where citizen scientists help researchers track the health of bird populations.
The bird count continues today and Monday. To participate, register and follow instructions at www.birdcount.org. It’s free.
Bird enthusiasts don’t have to actually make eye contact with a bird to count it, but the hawk was special. He topped the list of feathered friends spotted Saturday morning by Cai and his parents, Sally and Dr. John Bays, and siblings 8-year-old Ava, 5-year-old Asher, 2-year-old Porter and 1-year-old Pippy.
The family walked — well, Pippy and Porter rode — for roughly 30 minutes in a four-block area. Armed with binoculars, a camera and a checklist that Sally created of the birds they were most likely to see, they counted 86 thrushes, 65 robins, two cardinals, one northern mockingbird, one common grackle and a red-bellied woodpecker.
“We’re birders,” said Sally, who enjoys bird watching so much that she has a special chair and window overlooking multiple bird feeders in their backyard designed to attract different species.
When the family can’t identify a bird with their library of guide books, Sally snaps a photo and posts it to Facebook. “If all else fail, I just contact one of my birding friends and say, ‘Help,’ ” she said.
While the Bays are long-time birdwatchers, Tripp Edwards took up the hobby recently. Edwards heard about the bird count project and planned to participate.
If he had any second thoughts, the sight out his window Saturday morning convinced him to grab his camera and checklist and head outside.
Not one but two red-shouldered hawks were perched in Edwards’ backyard, just begging to be counted.
During two outings Saturday and a total of about three hours in his yard and a nearby park and pond, Edwards spotted hawks, Carolina chickadee, tufted titmouse, wren, sparrow, finch, cardinal, dark-eyed junco, great blue heron, mallard ducks, white-breasted nuthatch and more.
“I dig birds,” he said to explain his new pastime. “Is it fun? Yes. I enjoy their different flight patterns and colors and shapes.”
Edwards came to birding through the development of another new hobby, photography. A musician, Edwards bought a nice camera — Sony A65 — to photograph fellow musicians.
But when he discovered dozens of interesting birds in a tree in his yard last year, he unpacked his camera and zoom lens and started snapping pictures. They turned out to be cedar waxwings, and Edwards was hooked.
“That inspired me to start taking birds photographs in my yard and then looking them up to identify them,” he said. “The reason I got the camera was to photograph and video live music. This was really something I did not see coming.”
Now, Edwards photographs as many birds as bands, and he finds the birds more challenging. He has nine lenses and is mastering taking pictures in a variety of weather and lighting conditions.
John Bays came to birding as a child in Kentucky, when he and his siblings raised baby birds that fell out of nests and ducks they received as Easter gifts. Most fowl were successfully released into the wild, but one baby blue jay found an open toilet seat and took a tumble, looking for a bath.
John said his mother, a teacher, attempted to rescue the bird, even trying mouth-to-beak resuscitation.
“It was unsuccessful,” he said.
John, a pathologist at the VA Medical Center, introduced Sally to birding when the couple took a bird watching class in Oregon before they moved to Salisbury in 2012.
Now, the family enjoys the hobby together and has participated in the bird count for two years, as well as attending Southern West Virginia’s New River Birding and Nature Festival.
“It’s a huge subculture of geeky, awesome people,” Sally said. “It teaches the kids that they can be totally counterculture and be successful and awesome and happy.”
Edwards’ daughter, Lillie, loved animals of all kids, including birds. Before the 6-year-old died last year from a heart condition, Lillie enjoyed looking through a bird book that Edwards bought for her.
Lillie’s favorite bird was a strangely named specimen called the catbird. Edwards said a catbird used to frequent their backyard, but he has not seen the creature since Lillie died in January 2013.
A month after Lillie passed away, Edwards picked up the camera he bought to photograph bands and zoomed in on a tree full of cedar waxwings. A year later, he has found peace photographing, and now counting, birds.
“It’s therapeutic. It’s puts your mind in the moment,” Edwards said. “If your mind wanders off, you will miss it.”