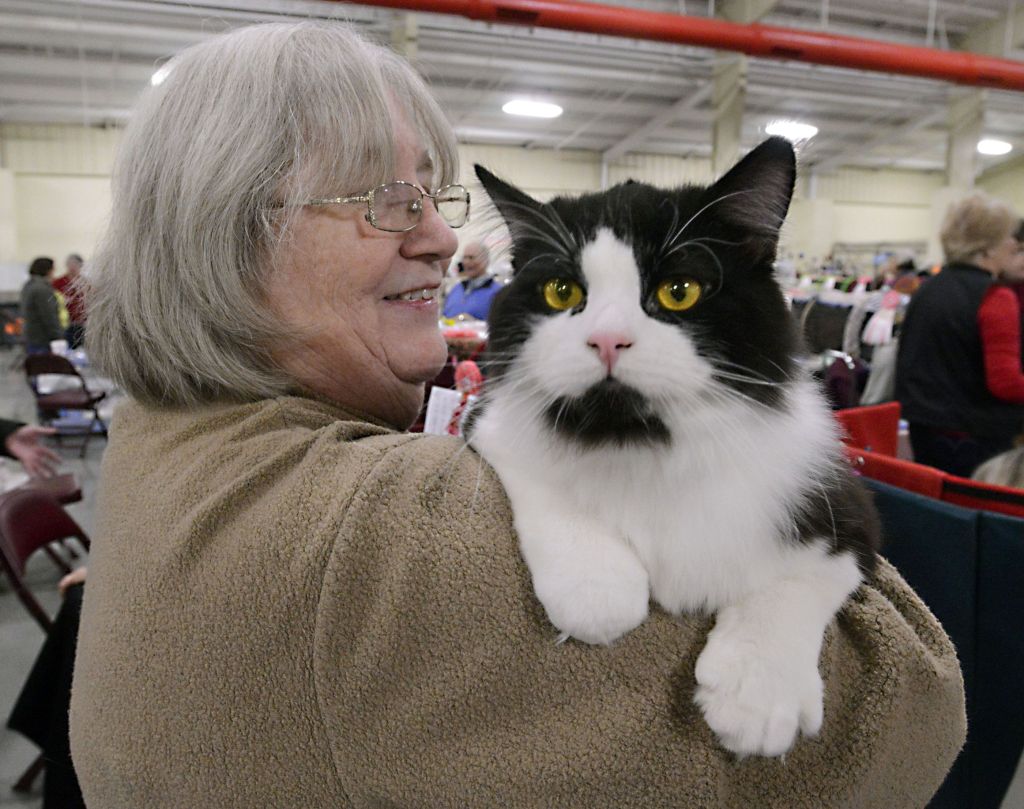 When first asked to cover and photograph a cat show, I thought, what in the world is a cat show and how can you get cats to do anything you want them to do?
In my 40-plus years working for the Salisbury Post or freelancing for the Post, I have never covered a cat show or had any knowledge that they existed in this area. I have covered, cattle shows, coon dogs shows, 4-H dog shows; shows with pedigreed dogs, hogs, sheep, alpacas, chickens; horse shows and human fashion shows.
But never a cat show.
Arriving at the Cabarrus Arena on Sunday morning, I needed someone to help me understand what I was about to cover. I found such a person in Lisa Highlan from Monticello, Ga. She is a breeder, here to show her 4-month-old Maine Coon cat named Maine Alisa. I learned that the Maine Coon breed is the only longhaired breed native to the United States. They are gentle, known for their temperament and often called “Gentle Giants.”
Also, I learned, never touch a cat unless the owner says it is OK.
The Cat Fanciers’ Association sponsoring the show recognizes 42 breeds for showing. A cat show is much like a high school track meet, with different events going on all over the arena at the same time. This show has 10 individual shows running at the same time, with a different judge in each show.
Each of the 10 judges sees and judges each of the cats at the show in small groups. Each judge holds his or her own little show. Ribbons are awarded in several categories: kittens, championship, premiership, household pets and feline agility.
At the end of the show, the top 10 cats are brought back out to select the overall winner.
Each of these cats costs $1,000 or more. To get a national winner, you have to travel all over the nation entering shows and collecting judges’ points. I was told of an owner who spent $22,000 in a year going to shows to get a national winner.
Since there are no money prizes, the only way to get any of your money back is in $1,000 breeding fees. The person who reportedly spent $22,000 only collected $3,000 in breeding fees.
I would call that national winner a “net loss” financially.
The owner said that having cats is a hobby like playing golf and having to pay greens fees and cart rentals and buying golfing equipment. Twenty-two thousand dollars is a lot of greens fees — and a lot of green money.
I watched Judy Harper from Nashville give her Persion cat, Toy Story, water from a giant hypodermic needle. I thought the cat was getting medicine until it was explained. Judy had to hold Toy Story’s ears and head back so that she didn’t get the heavy thick white coat wet just before judging.
Jean Brown of Kannapolis was the show manager. She made things run smoothly. She said this show had a bigger crowd than usual. The Cat Fanciers’ Association has a show at the arena every year on the second full weekend in February. This was the 10th year for the show called “Hearts A’Fire Cat Show.”
When not running the show, Jean has her own cat named Zora Strike Back — a black and white, long-haired Manx — to enter in the competition.
The most amazing part of the judging was the Agility Ring. As Brown said in an email, the Agility Ring always draws a lot of spectators. “[I]t is lots of fun to watch the cats run the course (or, not, as these are cats we are talking about) and enjoy seeing the owners make idiots out of themselves trying to get the cat to do what’s required.”
The owners had to have more patience than anyone should be expected to have while trying to get those $1,000 cats to run around that ring, up steps, through hoops and tunnels and over a hurdle. Some cats were just cats and wouldn’t do it. They would lie on their bellies and watch their owners do stunts.
One beautiful brown and white Turkish Angora named Imp ran the course for her owner Sarah Sieffert from Atlanta, Md.
“For the most part,” Jean says, “… the cats have a good time, the judges have a good time, and the spectators are thrilled to be up close and personal with some of the stars of the cat world.”

The next cat show in North Carolina will be the Midlantic Persian & Himalayan Fanciers Show at the N.C. State Fairgrounds in Raleigh on March 29. For online information: http://catshows.us/