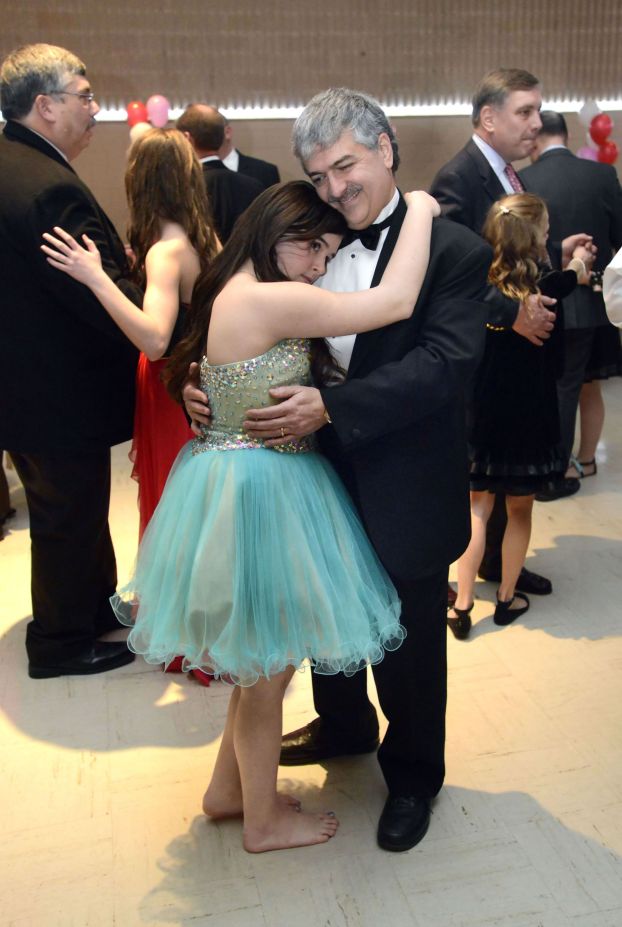 Father-Daughter Dance a family tradition for many

The Salisbury Recreation Department’s 18th Annual Father Daughter Dance is a magical time — a memorable night for 325 girls, ages 4 to 13, and their fathers.
It is a night of dressy dresses, men’s suits or tuxedos, flowers and balloons with DJ music.
Don Coggins has attended and danced his way through nine dances with his daughter, Kaitlyn. They first came when she was 4 years old and they have not missed a dance. This year Kaitlyn, a West Rowan Middle School student, is 13 and a little sad that the Feb. 8 Father-Daughter Dance will be her last.
“It gives me time to spend with my dad,” Kaitlyn says. “I have taught him all the dances and he has done well with them. Mother (Karen) lets me pick out my special dress every year. Mother likes the dance too. She thinks it is a good time to get away.”
Don wants the fun to go on.
“It is a chance to spend daddy-daughter time with Kaitlyn,” he says. “It has really been great each year to watch her grow up and compare her to the previous year. I will not be able to come with her any more, but I want the dance to continue so I have become a sponsor of the dance.”
Kaitlyn says she has the picture and newspaper clipping from her first dance when she was only 4.
To the Post photographer, Kaitlyn says, “You were the photographer who took my picture at my first dance when I was 4, and it’s so nice that you are taking my picture at my last dance also.”
She has looked forward to the dances and says she rates the dances a “10 out of 10.”
The idea of father and daughter sharing time is repeated over and over. Dickie Stone and daughter Chloee, on their fourth dance, say they enjoy spending time together every year.
Chad Cross dances with both his daughters, Maggie and Kahlil.
Little 4-year-old Tailor Russell has to be held in dad Troy’s arms to dance and look around the room.
Eddie Smith, while dancing with Kara, says it is their first dance but they will be back next year. His wife, Martha Marie, is planning on bringing their two sons to the Mother-Sons Luau.
When asked what kind of dance he’s doing, Aundrey Russell says he doesn’t know. His 6-year-old daughter responds, , “We are doing the Wobble.”
Aundrey says, “Well, I have never wobbled before, but I love it.”
The most dedicated father has to be David Correll, who had foot surgery and was not supposed to put weight on the foot. He promised his 10-year-old daughter, Josie, that they would come to the dance. He has a wheeled device much like a scooter to keep his weight off his foot, while he dances with his shoulders and arms. He is keeping his promise to Josie to come and dance.
Paul Moore, Salisbury recreation co-ordinator, says the the Father-Daughter Dance has become so popular over its 18 years that organizers have to limit the number attending to 325 dads and daughters.
“It is first-come and first-served,” he said.
“We have sold out for the past 13 years. We were the first recreation department in the state to offer a Father-Daughter Dance. We had the original dance and others have followed us.”

Touch of class on wheels: Salisbury man’s rare luxury Cadillac one of few left on road

Most people think of the Chevy Bel Air as the iconic car of 1957. But that same year, in a... read more