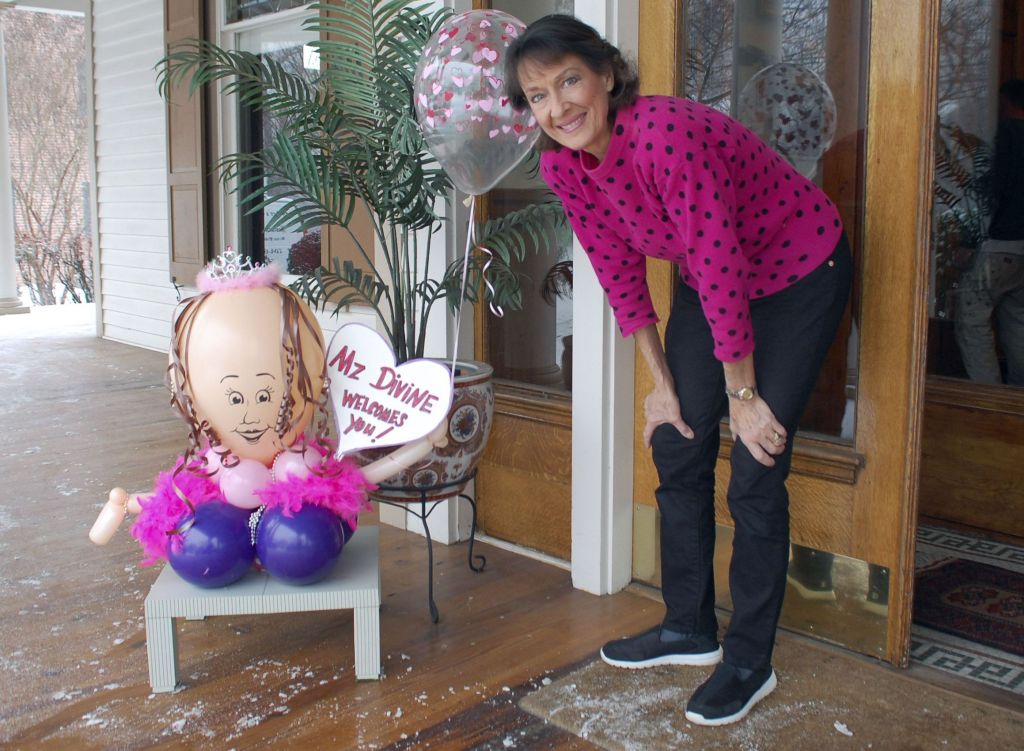 SALISBURY ­— Mary Miller James is Salisbury’s unofficial Queen of Hearts.
The “unofficial” part of the title fits, because James is host every year for her Un-Valentine’s Day Party, an all-girls affair to celebrate the sisterhood of the never-married, was-married and still-married-but-temporarily-ditched.
In fact, that’s pretty much how the invitation to tonight’s seventh annual bash reads.
James says that last classification or category only applies to her. She and her husband, Will, spend considerable time apart because of his contract job in Afghanistan.
“With Will gone so much, I had this idea seven years ago,” James says, also describing how she was always used to having a support system of girls because she waited until 50 before she married.
The Un-Valentine’s Day Party is not just a coffee klatch where a small group of women commiserate with each about being unattached on the holiday for love.
James sends out 180 invitations to her Lee Piper-catered affair, and the women who attend spread all through the lower rooms of her expansive, historic home on South Fulton Street. The party starts at 6:30, and women are lining up outside her door by 6:15 p.m.
James revels in all the connections and friendships that happen.
“I love it,” James says. “I just love when people can network like that.”
At a past party, Eleanor Sandifer and Barbara Richmond became fast friends. They later realized Sandifer’s late father, artist and illustrator Carl Spencer, had done a black-and-white sketch of Richmond in 1952, when Richmond wore the crown as Miss North Carolina.
Richmond grabbed one of her scrapbooks and later copied the sketch for Sandifer. She also met Sandifer’s son.
“We sort of became friends,” Richmond says. “It was easy for me to call her and ask if she would pick me up this Friday night.”
A widow, Richmond says James’ gathering brings together women with one thing in common.
“They’re by themselves,” she says. “They may have a boyfriend, they may not.”
Sandifer says so many women usually show up for the Un-Valentine’s Day Party, you might not see everyone who attends.
Sandifer once ran into a friend the day after the party, “and she said, ‘Yeah, I was there.’”
“It’s so wonderful for her to open her home like that on Valentine’s Day,” Sandifer adds.
Diane Dillon Hooper says James’ party is “great fun.”
“From the premise of ‘just attached or temporarily ditched’ to the eclectic mix of guests, it’s a fun evening,” Hooper says.
At James’ party, Hooper reconnected with Dr. Bethany Sinnott, one of her professors years ago at Catawba College.
The women had lived in the same town for decades without ever finding themselves in the same circles ­­— until this party.
“We’ve gotten to be good friends since then,” Sinnott says.
Widowed, Hooper says she has been going to James’ party for several years and has met wonderful new women and reconnected with others she doesn’t see often.
“I do think it’s funny, though,” Hooper adds, “that if someone does get in a ‘relationship,’ they no longer qualify!”
James says none of her married friends are offended by their exclusion.
“Normally, I like mixed companies,” Sinnott says, “but this is just sort of a lark.”
Sinnott says the food and drink are always good and a person feels “very loved” going to James’ house.
As more evidence of the networking that goes on, James recalls that Rachel Culler, who was needing some painting done, made a connection last year with Pat Marsh because of the party.
“So actual business for folks has resulted as well,” James says.
A balloon creation, “Mz. Divine,” is always part of the house decorations, as are heart-shaped plates, red trays, red napkins and a red tablecloth covered with hearts.
James continually looks for way to add a new wrinkle to each year’s get-together. This year she’s hoping to add a singer or two as entertainment.
“It’s gotten to be quite a thing,” James says of her party.
That’s unofficial, of course.
Contact Mark Wineka at 704-797-4263,or mwineka@salisburypost.com.