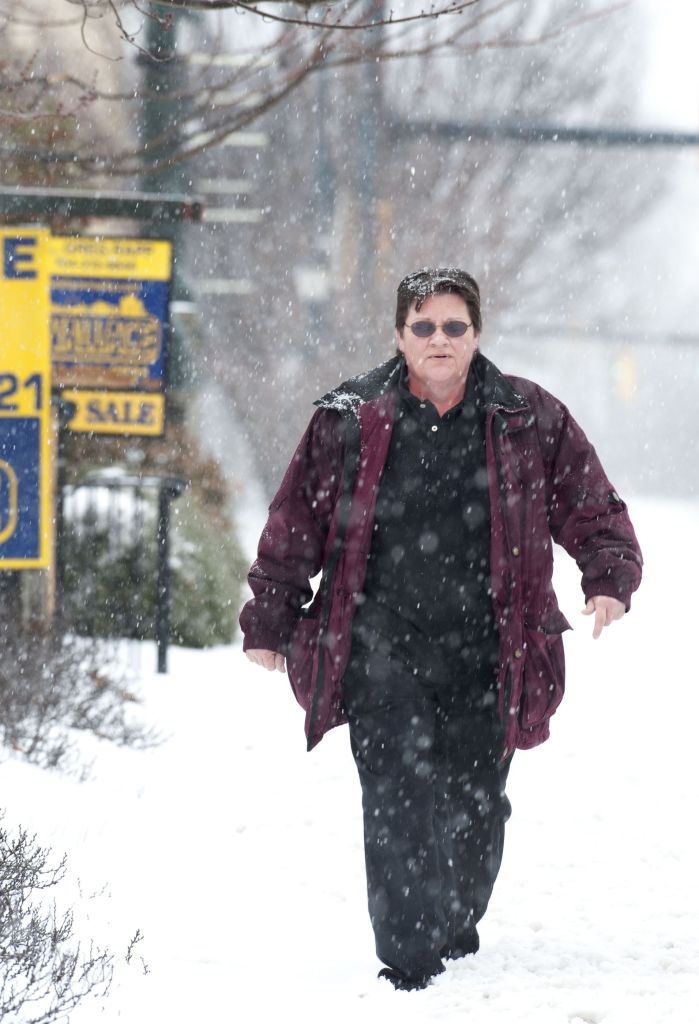 UPDATE: As of 5 p.m., Duke Energy reported 813 customers without power, down from more than 1,600 earlier in the afternoon. In Cabarrus County, Duke had reduced the number of outages from more than 1,200 to 156.
The outages spiked suddenly after having none in Rowan County and only a couple in Cabarrus this morning. That was associated with the path the winter storm has taken, according to Luke Currin, spokesman for Duke Energy.
He explained that this morning’s snow was much wetter than the snow that fell yesterday, and “wet snow takes a greater toll on the power system.”
Currin said some outages could be lengthy. Duke Energy has no way to provide a firm time frame to expect restoration.
“In the past, we’ve seen multi-day outages,” he said.
He added, “This is a serious storm.”
Currin said restoration during events like this is typically more complicated than other weather events. Snow and ice make travel conditions difficult, and there’s more assessment that goes into repairs.
Duke Energy has 3,400 employees working to restore power across their service area, including crews brought in from Florida and the Midwest, working to restore power to 205,000 customers.
Outages are currently concentrated in southern Rowan County, while many of Cabarrus County’s outages are in the northern part of the county.

Rowan County received 5 to 7 inches of snow Wednesday, with up to a tenth of an inch of ice on top of it. Forecasts call for an additional 2 to 4 inches of snow today, before the winter storm system clears up this afternoon.
Rowan County Emergency Services Director Frank Thomason warned county and municipal officials in a conference call this morning that black ice would be an issue Friday and into the weekend, as temperatures are forecast to dip below freezing each night.
Emergency services, including the highway patrol, police departments and sheriff’s office, are all reporting low call volumes this morning.
“Folks are doing really well with staying in or off the road,” said Sheriff Kevin Auten during the call.
Highway Patrol reported 35 collisions yesterday, while the Salisbury Police Department reported 16. Kannapolis police reported 28 collisions.
Emergency services reported 11 motorists requested assistance after midnight and they had responded to 34 total calls since at 8 a.m.
The N.C. Department of Transportation is working to get primary streets and the interstates cleared, but will have to start over after most recent snowfall.
The city of Salisbury has 10 snowplows working to clear roads, making roads around the hospital and downtown Salisbury a priority. They have spread 100 tons of sand and salt mixture and have another 100 tons left.
Novant Rowan Medical Center is grappling with how to get their staff to and from work. They are in the process of obtaining four-wheel drive vehicles to transport staff.

With new snow falling at a fast rate, roads that were scraped after daylight are quickly getting covered again.
Reporters trying to get to work at the Post are having trouble getting out of driveways and parking lots. Church Street in the downtown area is particularly bad. Photographer Jon Lakey is out walking with night editor Paris Goodnight, taking photos and talking to those who are out.
Most businesses remain closed.
Few accidents are being reported, but plenty of vehicles have slid off the road or are stuck on hills. What cars are seen around downtown are moving very slowly and traveling in narrow tracks.
The temperature has climbed to 32 degrees, but heavy snow is falling.
Driving conditions this morning around 7 a.m. were treacherous. Main Street and Innes Street were covered in snow with a layer of ice on top. Only a few spots had been cleared. Side streets remain virtually impassable.
People with low-to-the-ground cars will have an especially hard time due to the accumulation of snow and ice. What vehicles were out were mostly SUVs, heavy pickups and four-wheel drive vehicles. A few mid-size cars were able to navigate the lanes of icy snow.
The temperature has risen slightly to around 30 degrees and there is no precipitation at the time, though forecasters predict more snow/sleet/freezing rain later this morning.
Though most businesses are closed, some local stores opened this morning.
Sarah Barnett, manager of the Pop Shoppe on West Innes Street, drove from her home in Mount Pleasant.
“I live on country roads. … It took me a good hour and a half to get here,” she said. “None of my workers can get out of their driveway.”
Barnett took over at 9 a.m. from an employee who had worked a 15-hour shift at the store, which is typically open 24 hours. Barnett had worked a 15-hour shift before that.
“And I just don’t have it in me to do it again,” she said.
She planned to close at noon.

Emergency Director Frank Thomason sent this forecast from the National Weather Service:
WINTER STORM WARNING REMAINS IN EFFECT UNTIL 6 PM EST THIS EVENING…
* LOCATIONS…THE NORTHWEST PIEDMONT INCLUDING ROWAN COUNTY
* HAZARDS…A MIX OF HEAVY SNOW…SLEET AND FREEZING RAIN.
* TIMING…SLEET AND FREEZING RAIN WILL BE THE MAIN PRECIPITATION TYPES THROUGH DAYBREAK. THEN A FINAL ROUND OF HEAVY SHOW IS EXPECTED FROM DAYBREAK INTO THE EARLY AFTERNOON. (SEE ATTACHED GRAPHIC). THE PRECIPITATION WILL END FROM THE WEST THIS MORNING AS A FINAL BAND OF SNOW…WITH SNOW POSSIBLY. LASTING INTO THE AFTERNOON HOURS ALONG AND EAST OF INTERSTATE 77.
* ACCUMULATIONS…ADDITIONAL SNOW AND SLEET ACCUMULATION OF 2 TO 3 INCHES. SOME ADDITIONAL ACCUMULATION BEYOND THIS MAY BE SEEN IN THE WESTERN SECTIONS OF THE COUNTY CLOSE TO THE IREDELL COUNTY LINE AND STATESVILLE.
* IMPACTS…THE HEAVY SNOW…SLEET AND PERIODIC FREEZING RAIN WILL MAKE TRAVEL TREACHEROUS.
* TEMPERATURES…MAINLY IN THE MID 20S…WARMING INTO THE LOWER TO MID 30S IN THE AFTERNOON.
* WINDS…NORTH 10 TO 20 MPH WITH GUSTS UP TO 25 MPH.
* VISIBILITY…ONE QUARTER MILE OR LESS AT TIMES POSSIBLE IN HEAVY SNOW.