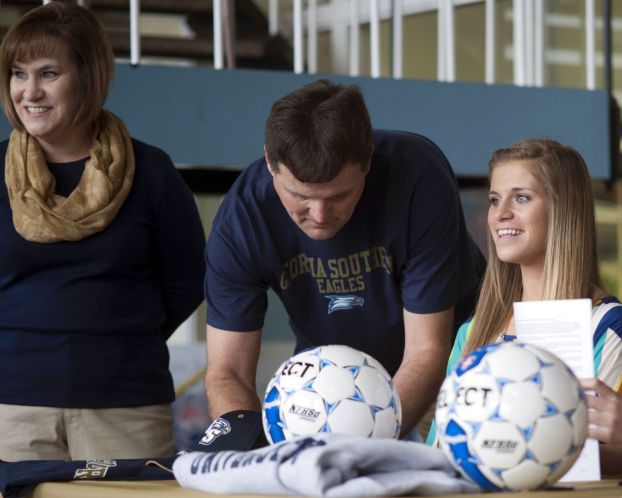 MOUNT ULLA — Maybe Rebecca Parker isn’t one of the first names that pops into your head when you’re thinking about the county’s best athletes, but she should be.
Parker not only has given West Rowan’s opponents fits as an all-region soccer player for conference championship teams, she’s also proven she’s fit.
She turned in the county’s fastest 1600 and 3200 times in outdoor track as a junior last spring.
In the fall, she kicked off her senior year by crossing the finish line first to claim a three-peat in the Rowan County cross country championships.
If you’ve followed Parker’s progress across the seasons, you weren’t surprised when she inked with a Division I school on National Signing Day. She’s headed to Georgia Southern in Statesboro, Ga. The gameplan is for her to compete in both cross country and track and field for the Eagles.
“Rebecca has worked very hard to get where she is today and is an example to younger student-athletes,” said Catawba cross country coach Brittany Chester, who coached Parker in two sports at West. “She’s showed you can reach your goals in athletics without letting your academics and involvement in other activities slip.”
Parker has excelled as a soccer player a long time. Tall (5-foot-9) and fast, it looked like that’s where her college future would be. Her sister Allison starred at West and plays now at Catawba.
“I’ve played soccer since kindergarten and I kind of took up running as a sophomore as a way to stay in shape for soccer,” Parker said. “But then I ran in the pre-county cross country meet and was as surprised as anyone when I won. It was like, ‘Hey, maybe I can do this.’ That’s when I really got into it.”
The rest is mostly Rowan cross country history. Besides going 3-for-3 in gold medals at county meets, Parker placed second as a senior in the South Piedmont Conference Championships. Then she ran a season-best 19:12 in the Midwest Regional to qualify for the state competition.
Parker’s most impressive high school feats came last spring when she competed at a high level while participating in two sports simultaneously. She made her track and field debut for the Falcon, putting in some track miles between soccer practices and games.
“There were days she’d go run after soccer practice,” said Nick Brown, who coached Parker in soccer for three seasons. “She’s developed passion for running.”
Parker still had big nights on the soccer pitch and scored two goals in a hard-fought 3-2 win against Carson that was part of a 38-game NPC winning strea. But she also managed to shine in track. She won the 3200 in the Rowan County track meet by almost two minutes.
Then she doubled up and won the 1600 and 3200 in the West’s last appearance in the North Piedmont Conference Championships.
“It was a tiring spring doing two sports,” Parker said. “It was like soccer game-track meet- soccer practice-soccer game, and that’s pretty tough to do.”
She handled the workload amazingly well.
“She still did well in soccer,” Brown said. “She always had a positive attitude, and she kept her grades up.”
Like her running career, Parker’s choice of schools came out of the blue.
She attended an adidas camp, and one of the girls she met there advised her Georgia Southern was a school she should take a look at if she was going to pursue running in college.
It’s a long drive to Statesboro, but Parker felt right at home. She’ll be joining an athletic program that will be facing new challenges. Georgia Southern, as well as longtime rival Appalachian State, will switch affiliations from the Southern to the Sun Belt Conference in the fall of 2014.
Parker may be competing in college in a track event that isn’t part of the high school program.
The steeplechase.
The steeplechase is a 3,000-meter run with some jumping over hurdle-like barriers and a water-jump thrown in for good measure. The grueling event could be a good fit for Parker who combines athleticism with her exceptional endurance.
“They think I might be good at it,” Parker said. “I want to give steeplechase a try.”
Parker should have another outstanding spring in front of her and then an exciting college career. Her long-term goal is to become a corporate personal trainer.
“Rebecca is a true competitor and leader, and she’s broken about all the female distance-running records that existed before she came to West,” Chester said. “She’ll be missed, but I’ll look forward to watching her at the next level at Georgia Southern.”