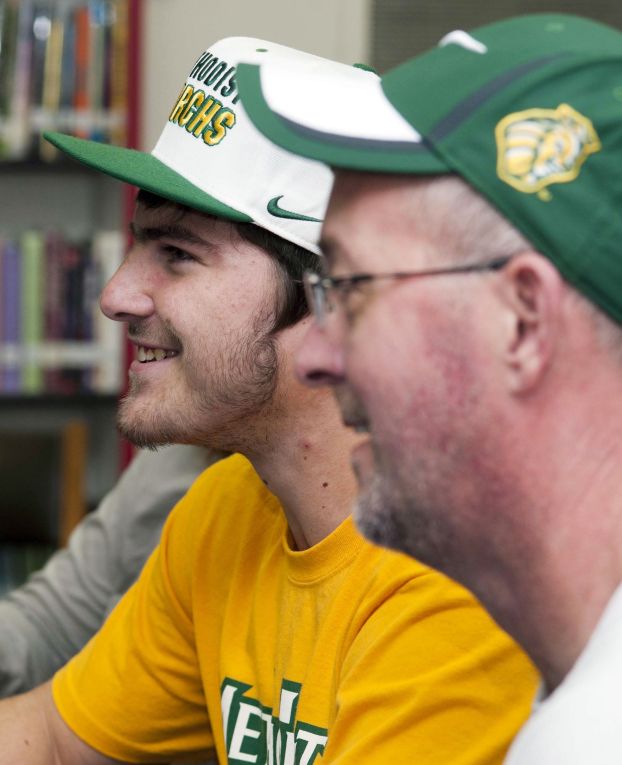 GRANITE QUARRY — Austin Hill was the chosen one.
One day at practice sophomore year, Hill got picked to be the long snapper. It’s usually not something lineman seek out, but it’s a good way to make yourself more versatile and, hey, colleges like that sort of stuff. It was a nice boost that Hill added to his resume and it may have gotten him a chance to play college football.
“Coach told me I should be good at it,” Hill said last week from the ERHS media center. “I just developed from there.”
Hill will be a hybrid defensive end/linebacker at Methodist in addition to being a long snapper. The 6-foot, 170-pounder isn’t the ideal size for a college lineman, but he’s put in the work like everyone else did at East to bring the program back to respectability.
East’s defense two years ago featured guys like Hill, Dock Corpening, Tyler L’Hommedieu, T.J. Jefferson and Donte Means. The Mustangs were coming off a one-win season in 2011 and had a new coach, former Mustang Danny Misenheimer, coming in. Misenheimer resigned last month, but helped revitalize East in a short time frame.
“I had hopes,” Hill said of 2012. “With a new coach and everything changing, we didn’t know how good we were going to be. We bought into everything and it worked.”
East that year held eight opponents to 14 points or less and had 3A West champion Concord on the ropes in the third round of the state playoffs. Hill was an all-county and all-conference selection. Corpening, L’Hommedieu and Jefferson have signed to play in college.
“What I’ll remember most is not the games, but practicing with the guys,” Hill said. “They really made football fun.”
Methodist is a Division III school in Fayetteville that plays schools like Guilford, Emory & Henry and Averett. West Rowan’s Jack Gallagher signed there last year as did A.L. Brown’s Orlando Gray. Hill says they utlitize a defense that carries a hybrid lineman/linebacker position that he’s perfect for.
“He was a between-player for us,” East defensive coordinator Jason Barnes said. “He’s one of the best defensive linemen I’ve had an opportunity to coach. Unfortunately, he’s smaller than most defensive linemen.”
Height wasn’t a deterrent to Hill being disruptive. Hill put in time at linebacker until being broken in at defensive end.
In the win at Northwest Cabarrus this season, Hill stepped in front a pass from quarterback Brandon White for an interception and took it 34 yards for a touchdown to give the Mustangs a 28-7 lead. He also recovered a fumble in a shutout win against Salisbury.
In a 2012 win against Carson, Hill finished with three sacks and two tackles for loss. That season, East’s defense was the backbone of its 8-4 record that made it the feel-good story of the year. Hill was among the county leaders in tackles for loss and sacks.
Hill wants to major in athletic training and physical therapy and likes the program Methodist offers.
“The coaches don’t just care about football, they care about grades as well,” said Hill before adding he liked the campus.
Barnes is a fan of Hill, one of the first players he coached at East. Hill was stuck at DE this year to fill a need and ended up being the Mustangs’ top lineman.
“He’s so coachable and does things so well that even at his size, he’s able to do great things for us,” Barnes said. “There’s no question in my mind, he’s going to play very well. He’s going to be able to go up there and play the hybrid.”