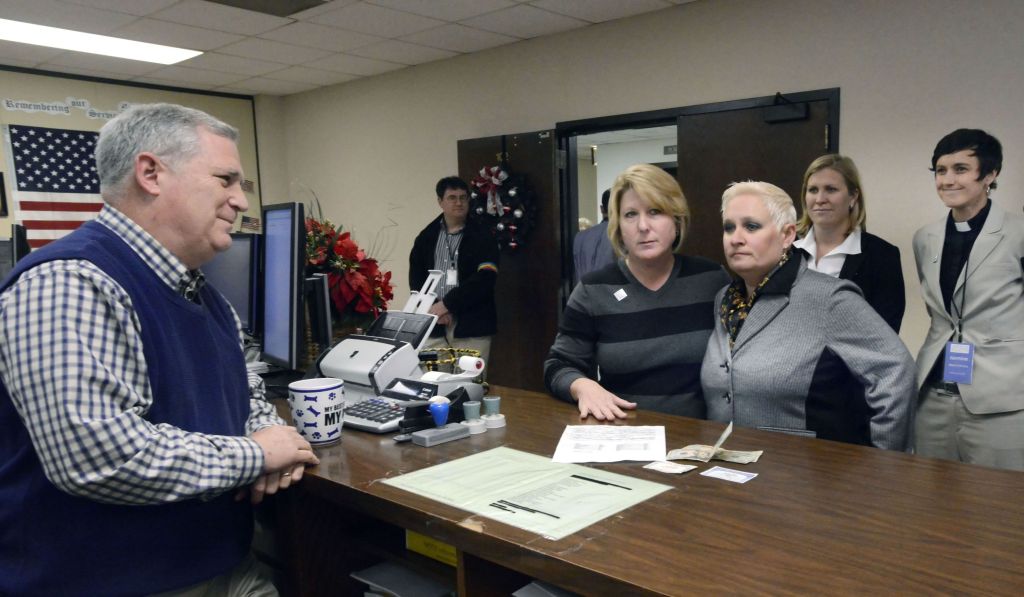 SALISBURY — As of March 13, Tamara Sheffield and Maryja Mee will have been together for 24 years.

“We met in college,” Sheffield said. “

On their 20th anniversary, in 2010, they had a commitment ceremony at the Salisbury Train Station, a place both said is special to them.

But their dream is to be legally married.

In January, a friend told them about a contest being sponsored by the American Civil Liberties Union.

The ACLU’s “My Big Gay Illegal Wedding” contest asks couples in states where same-sex marriage is not legal to tell their stories, and how they would celebrate an “outrageous” wedding if they could.

The top five couples will each receive $5,000 from the ACLU to finance a trip to a state where same-sex marriages are legal, so that they can be legally married.

Although the state of North Carolina will not recognize the marriage, the federal government will, following the U.S. Supreme Court’s ruling that overturned provisions of the Defense of Marriage Act last year.

Sheffield and Mee came to the contest late — about a month after it had already started, Mee said.

They had no idea they’d end up being the frontrunners nationwide.

Both Sheffield and Mee say their friends and family have tirelessly supported them.

On Facebook and Twitter, and through other means, people who know them have shared links to a video in which the two tell their story.

Sheffield said she thinks their relationship’s longevity and positivity are part of what have drawn people to vote for them.

“We love each other, and I think our friends see that,” Sheffield said. “And, through our own challenges and obstacles, we managed to make sure we stuck together. We’ve been fortunate to build a great life.”

The contest runs through Feb. 16.

If the couple stays in the top five, and wins one of the $5,000 prizes, they plan to travel to New York city to be married in March.

They’ve traveled to New York before, Sheffield said, making a trip for St. Patrick’s Day in 2002.

But the crazy, outrageous, million-to-one part of their dream wedding would be to have singer Stevie Nicks be the one to officiate.

Mee said Nicks, famous for her solo career and her years with rock band Fleetwood Mac, recently officiated another wedding.

Although it might not be realistic, Mee said, it’s nice to dream.

There’s another romantic, and symbolic, aspect to the trip.

They plan to travel by train from the Salisbury depot, where they had their commitment ceremony four years before.

“I think we’re just looking forward to seeing the sights of New York, catching a show. Just having a good time,” Sheffield said.

Moreover, Sheffield said, she hopes their story will bring others to realize the fact that they should be able to get married in North Carolina.

“The whole premise of the contest is that people have to travel to other places to get married, so it will be a legal wedding for the federal government,” Sheffield said.

This is not the first time they’ve made a statement on same-sex marriage.

In November, Sheffield and Mee were one of the couples who made a symbolic attempt to apply for a marriage license in Rowan County.

Mee said the contest isn’t just a way to tell their story, but “to say hey, we deserve the equal rights that people in other states are afforded.”

In a phone interview, Mike Meno, communications director for the North Carolina ACLU, said the organization wants to bring attention to issues same-sex couples deal with in this state.

Without legal recognition of their marriages, Meno said, same-sex couples who have biological or adopted children have limited parental rights.

Also, Meno said, same-sex partners who may be married aren’t entitled to other rights, such as hospital visitation or access to insurance benefits, that may be afforded to other spouses.

Meno said the contest is part of the ACLU’s efforts to challenge North Carolina’s definition of legal marriage.

“They (Sheffield and Mee) are just one of many loving couples who aren’t being given the recognition they deserve,” Meno said.

Meanwhile, Sheffield said she and Mee are grateful to the friends, family and strangers who’ve shown their support online.

“You know, our love is no different than anyone else’s and we’re just trying to raise awareness of it,” Sheffield said.