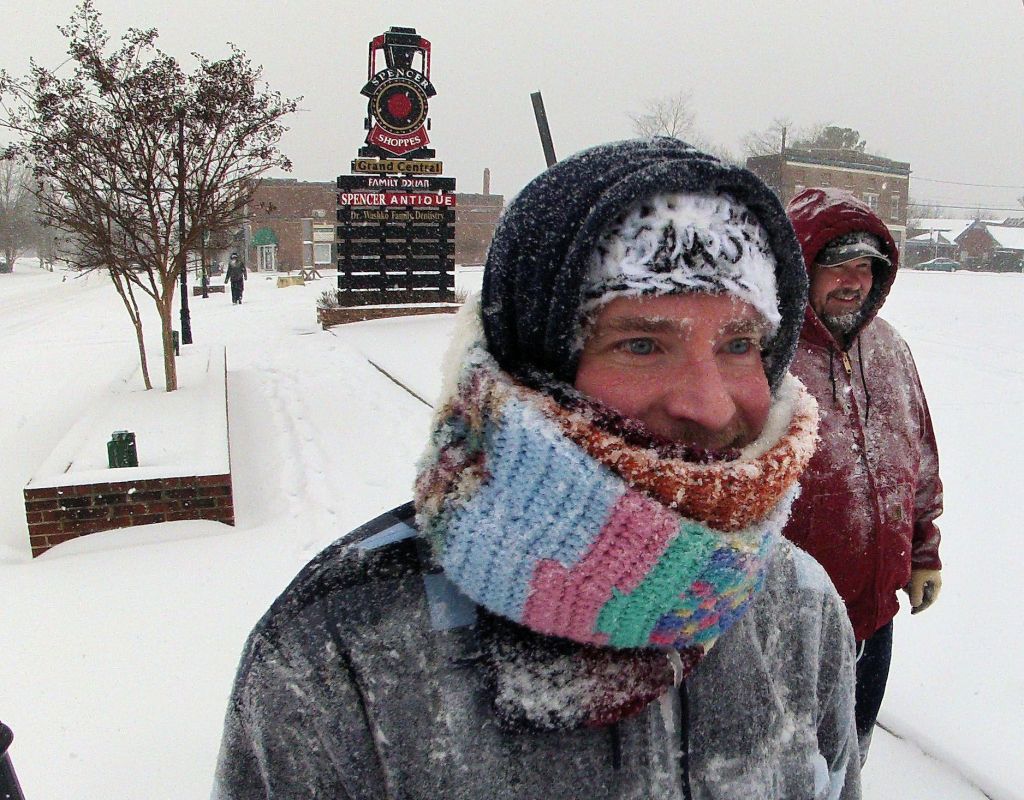 A winter storm that plowed into Rowan County on Wednesday created a wonderland for some but a treacherous trek over snow-covered roads for others.
And the National Weather Service said conditions could get much worse overnight, with sleet and freezing rain the main forms of precipitation before another round of heavy snow possible this morning.
A winter storm warning remains in effect until 6 p.m. today.
Rob Robinson, director of Rowan County 911, said between 1 p.m. and 5 p.m. Wednesday, 72 wrecks were reported around the county. They were part of about 100 traffic-related incidents that included drivers sliding off the road and getting stuck.
The Rowan-Salisbury and Kannapolis school systems canceled school for students and faculty again today. Catawba College, Rowan-Cabarrus Community College and Livingstone College are also closed.
Several inches of snow fell Wednesday afternoon, and the National Weather Service said the snow was expected continue overnight. Rowan County Emergency Services Director Frank Thomason said some parts of the county could see 9 inches of snow.
Thomason said sleet and freezing rain had been reported in the county at 2 p.m. Wednesday, and the weather service said that would continue overnight with snow mixed in.
The potential for ice along with winds throughout the night had emergency officials concerned about power outages.
The weather service also says residents can expect snow before 4 p.m. today, with rain also likely. The high will be near 35 degrees with wind gusts as high as 21 mph.
Area emergency responders had crews on standby. Smaller municipalities shut down their offices on Wednesday, but fire, police and public works crews remained operational.
Area responders, community leaders and other officials communicated via a Wednesday conference call about how departments would respond to the winter storm.
Monica Bruns, an emergency services specialist with the Hanford Dole Chapter of the American Red Cross, said the chapter is closed, but she and key volunteers were manning the phones Wednesday.
If the need arose, the Red Cross could open an emergency shelter. The Red Cross can be contacted if someone has questions about area emergency shelters or the status of a shelter. Bruns said the Red Cross can work with people to help get them to the shelter location.
For information, call the Red Cross at 704-633-3854, extension 107.
The Salvation Army of Rowan County is equipped to provide meals if the Red Cross has to set up a shelter.
Rowan County Emergency Services maintains a list of people with special needs who can also request to be placed on a list with the emergency services department. However, emergency responders say they cannot provide those people with transportation to a shelter via an ambulance.
For information, call Rowan County Emergency Services, 704-216-8900, Monday-Friday, 8 a.m.-5 p.m.
If the area experiences power outages, officials recommend residents contact their power company. Duke Energy has already compiled a list of its customers who have medical needs that would be disrupted if they were to lose power.
There were no outages reported in Rowan County late Wednesday.
Randy Welch, a district manager for Duke Energy, said during the conference call that the company had already moved 500 workers from Florida to North Carolina and South Carolina in preparation for the storm.
Welch encouraged customers to have flashlights and batteries handy in the event they experience power outages.
He advises families to keep in close contact with relatives who have special needs.
Welch also advises residents not use gas grills to heat the inside of their homes.
The area could experience multi-day outages, he said.
Welch said people should stay away from “sagging” power lines and report them to 911 or Duke Energy.
To report an outage, contact Duke Energy at 1-800-769-3766.
To contact Piedmont Natural Gas, call 1-800-752-7504.
Novant Health Rowan Medical Center says it has closed entries into the building except the emergency department, which will have extra staff on hand to assist with any medical needs that may arise.
The W.G. (Bill) Hefner VA Medical Center has closed its outpatient clinics and has canceled outpatient appointments. Updates for Salisbury VA facility operations are available at www.salisbury.va.gov.
Many fire and law enforcement responders will stay close to their stations to aid in anticipated response.
Salisbury Police Chief Rory Collins said his department learned from the 2004 ice storm and now has portable signs available to be placed at intersections if the lights go out.
Sheriff Kevin Auten said his department will aid county police agencies including Landis, Cleveland and Rockwell, if needed.
Unlike Salisbury where few wrecks were reported early in the day Wednesday, Kannapolis Police Chief Woody Chavis said his department was inundated with crashes.
“All of our intersections are jammed up,” he said.
He said Kannapolis has plans in place to respond to emergencies if they arise.
“It looks like we’re just going to weather the storm,” Chavis said.
The N.C. Highway Patrol was also responding to numerous wrecks on the interstate. At one point, the southbound side of Interstate 85 was closed just north of Salisbury because of several traffic collisions.
Other emergency responders including Rowan EMS and Rowan Rescue Squad will use their larger vehicles and four-wheel drive vehicles to respond to calls. Rowan EMS will also partner with NuCare Ambulance Service for response.