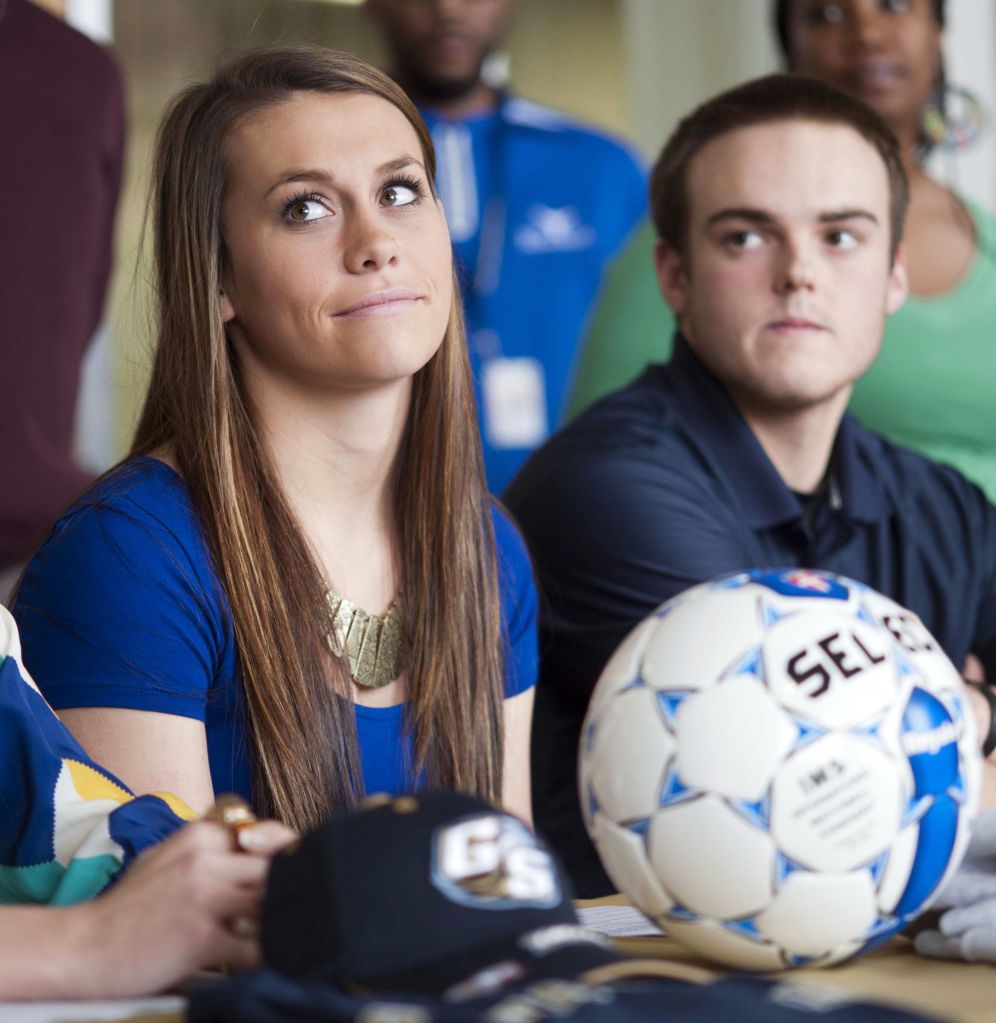 MOUNT ULLA — Former West Rowan soccer coach Nick Brown watched Mariah Coleman sign her National Letter of Intent with Wingate with the mixed emotions of cheer and fear.
Brown, recently named as Lake Norman’s new coach, also is an assistant at Catawba, and to watch one of his star pupils sign with one of Catawba’s SAC rivals had to make him want to kick over the signing table and earn a red card.
But Brown handled things with a calm smile and a calm voice — the way a three-time region coach of the year and the reigning 3A state coach of the year is supposed to handle adversity.
It helped that Brown already has traveled this road before — when West’s Toni Lucente signed with Wingate’s Bulldogs a year ago.
“Putting Mariah and Toni together again at Wingate, well, it’s going to be exciting to watch,” Brown said with a sigh. “But we’ve got to play ‘em.”
Catawba graduate Brown has quietly built a mini-dynasty in Mount Ulla. West will face new challenges in the South Piedmont Conference, but the Falcons won their last 38 North Piedmont Conference matches. West is 69-14-3 the last four seasons, has achieved state rankings and has produced the last two Rowan County players of the year in Catawba’s Allison Baucom and Lucente.
Now it’s Coleman’s turn to shine as a senior, and Brown believes she’s as good as any of the marvelous players who have propelled the Falcons to conference crowns in recent seasons.
“She has a combination of size and speed and strength that’s been unmatched here,” he said. “You see a lot of girls that are fast, but they aren’t 5-foot-10 like Mariah. And she’s continuing to grow as a player.”
Coleman’s height does make her special. She’s played midfield and forward for West and will likely be a forward at Wingate. She chose Wingate despite two Division I offers.
“Longwood and Chattanooga offered,” Coleman said. “But I really do like Wingate. They have the business program I wanted and their soccer team was in the Elite Eight in Division II last fall. I did think really hard about D-I, but the biggest thing is that while soccer is going to be very important to me at Wingate, it’s not going to have to be everything. Soccer isn’t going to be my whole life.”
Coleman can’t wait to be reunited with running mate Lucente. Lucente contributed to Wingate’s great season as a freshman (college soccer is played in the fall). She played in 23 games and started eight in the midfield.
“Toni always has been my role model,” Coleman said.
Coleman has played travel and club soccer for many years, She arrived at West with skills but without the assertiveness to translate skills into goals.
“That freshman year she wasn’t confident,” Brown said. “Her signing with a college at that point did not look like a possibility to her. But she was always capable. It was a matter of convincing her she could be an elite player. I remember we kind of had our differences a few times.”
Coleman’s freshman year was quiet. She scored three goals and had two assists for a 17-3 team.
Brown’s lessons — mental more than physical — kicked in during Coleman’s sophomore year. She made a spectacular jump to 20 assists, helping Baucom and Lucente pile up goals for a 20-4-1 team, Coleman also scored 17 goals herself, including her first hat trick against North Iredell. She made all-county for the first time.
“I was very timid when I started out at West, but Coach Brown was my mentor in everything from the basics on up,” Coleman said. “There was a time when I really didn’t want the ball, but now I want it every time. Coach made me start believing I could do good things. He’s the best coach I’ve ever had.”
Brown watched Coleman’s progress continue as a junior. Her scoring increases matched the growth of her inner swagger. She had 25 assists and 22 goals for a 17-4 team and helped Lucente become a 100-goal scorer. Coleman added all-region to her all-conference and all-county accolades.
Brown keeps careful tabs on goals (two points) and assists (one point) and says Coleman’s career totals of 42 goals, 47 assists and 131 points rank her fourth in school history behind Lucente, Baucom and 2011 graduate Brittany Gibbons.
Coleman will enter her senior season as an All-State candidate and a county player of the year candidate, and West will count on her not just as a striker but as one of the team leaders.
“It’s been great to watch her confidence soar,” Brown said. “She improved to the point where signing on National Signing Day became realistic — and here she is.”
Brown will enjoy following Coleman’s senior season. After that, he’ll have to figure out how to stop her.