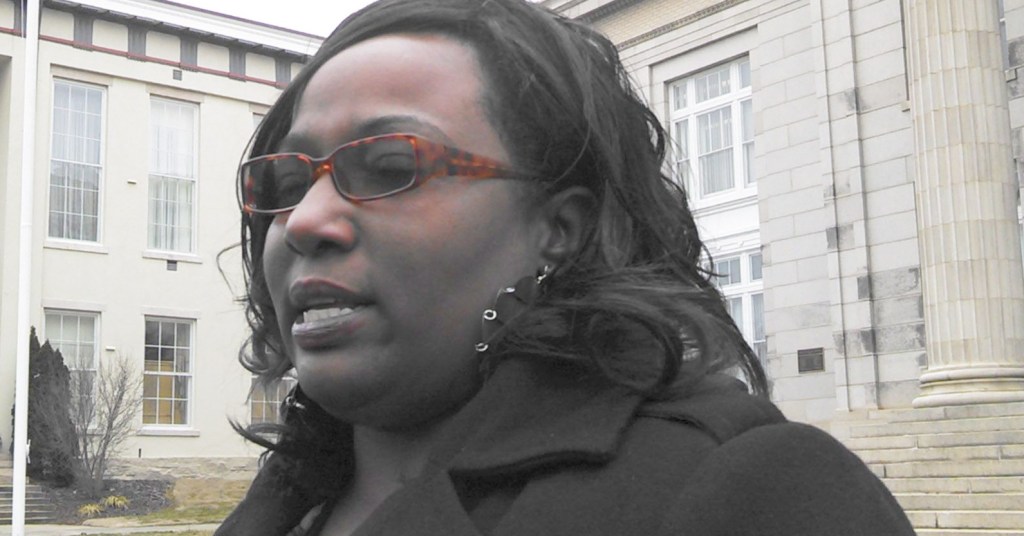 A Rowan County judge increased bond to $1 million Tuesday for a teen charged with shooting Salisbury High School freshman Shaleek Williams outside the school’s gymnasium after classes Monday.
DaJuan Lamont Russell, 17, is charged with assault with a deadly weapon with intent to kill inflicting serious injury, possession of a firearm on school property and discharging a weapon on school property, all felonies. Russell was booked into the Rowan County Detention Center late Monday under a $250,000 secured bond.
Salisbury Police say Williams, 16, was trying to diffuse a fight that reportedly began over the weekend and continued Monday. He was shot in the abdomen and was taken to the hospital by a parent. Williams was released from the hospital several hours later.
Just before noon Tuesday, District Court Judge Kevin Eddinger increased the bond to an amount DaJuan Russell’s aunt, Shenita Russell, says the family can’t possibly pay.
Shenita Russell was inside the courtroom during her nephew’s first appearance. Eddinger appointed Salisbury Attorney Steve Gray to represent Russell.
Williams, recovering at home, said Monday night that even though he wasn’t involved in the fight, he and his family believe Russell already disliked him and saw an opportunity to harm him.
After the shooting, Salisbury High was placed on code red lockdown for 50 minutes.
Several teens were seen running from the scene following the shooting, one teen ran away with Russell, but Salisbury Police Capt. Shelia Lingle said, “at this point in the investigation Russell is the only one charged.”
After the hearing, Shenita Russell said she had raised DaJuan Russell since he was 6 years old. She said DaJuan was raised in a loving home with plenty of family support. Russell said she felt as if this was not only an issue that has affected her family, but a community issue.
“The community knows about the heightened activities of our young adults and the lack of support as far as jobs and helping to build broken family relationships,” she said.
She said a parent or guardian can guide their children, “but at the end of the day, it’s their own decisions.”
“I have very deep feelings and sorrow for the victim and really for all the young people. I work with young people on a daily basis. Why wouldn’t I give 150 percent for my nephew and I give 150 percent for someone else’s child,” Russell said.
Shenita Russell is a counselor who provides career and education training to help young people obtain their diploma or obtain employment.
“He’s a very smart, intelligent young man. He just made a wrong decision, but that has to be proven in court as well. However, I’m going to continue to support him,” she said.
Russell said she’s supported DaJuan and tried to get him involved in community activities.
“Any child could be prone to what happened to DaJuan. No child, no child regardless of what kind of upbringing can avoid this to a certain extent. We try our hardest as parents, as guardians to help our young people, but at the end of the day it’s their own decisions,” Shenita Russell said.
DaJuan is not this “thugged out individual,” she said.
Russell said he had gone to Salisbury High and Knox Middle School and believed his teachers would say her nephew was not a troubled child.
Authorities and School Officials said DaJuan Russell was not currently a student at Salisbury High.
Russell said she felt as though her nephew has already been judged, but felt people were entitled to form their opinions.
She said her heart sank when the judge raised the bond amount. She said she didn’t know if it would be possible to get her nephew out of jail.
Russell said her nephew wasn’t “equipped” to be in jail or “on the streets.”
DaJuan Russell was escorted into court wearing a county-issued jumpsuit, socks and flip flops. He was handcuffed and wearing leg shackles, as is customary with everyone booked into the detention center.
Eddinger informed Russell of the maximum sentence he could receive for each offense.
On the assault with a deadly weapon with intent to kill inflicting serious injury, Eddinger said the teen could face 231 months, 24 months for possession of a firearm on school property and 59 months for discharging a weapon on school property, or slightly more than 26 years.
Eddinger asked Assistant District Attorney Austin Olive if he was ready to proceed with the hearing and inquired about the facts of the case. Olive said he was not ready at that time.
“Well, I am,” Eddinger said.
The judge set a probable cause hearing in the case for Feb. 24.
Contact reporter Shavonne Potts at 704-797-4253.