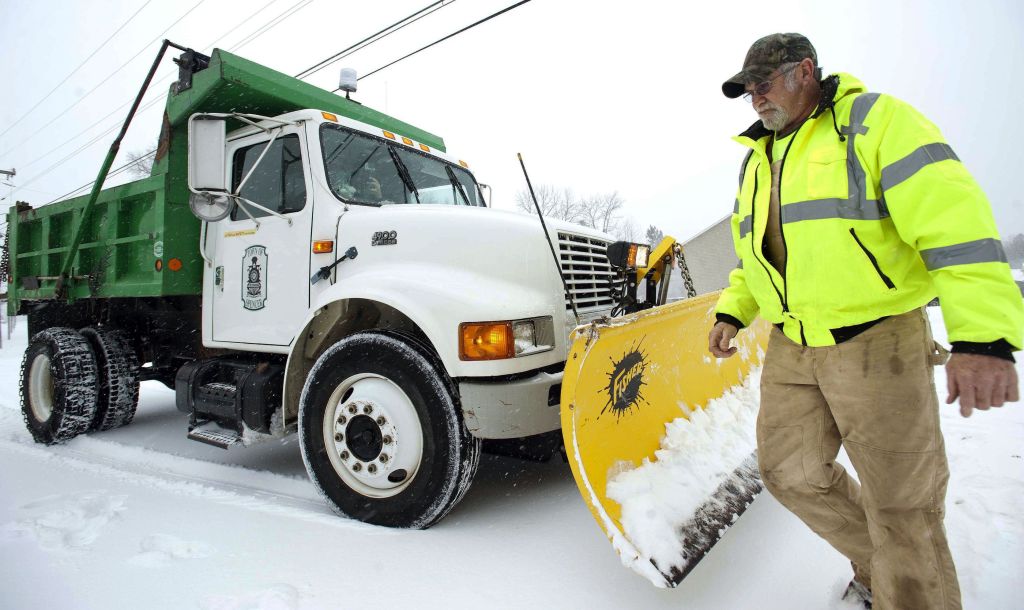 SPENCER — While snowbound folks might have been spending their Wednesday afternoon flipping through television channels, Barry Pruett was using a different kind of remote control.
At the press of a hand-held device inside the cab of his Spencer dump truck, Pruett could make the 9-foot-wide blade of his snowplow go up and down, or angle left and right.
Pruett also had to worry about steering the truck, shifting gears and talking on the radio.
“You got two hands,” he said. “Sometimes you need three.”
Pruett worked in tandem Wednesday with Joshua Brown, who was manning an older model Ford truck, also equipped with a plow in front.
Joel Taylor, public works director for Spencer, sent the men out at 3:15 p.m. Wednesday as snow quickly accumulated on the streets.
By the time they left the shop on Sowers Ferry Road, the men had measured 3 inches of accumulation, and it was mounting fast.
“It’s a little deeper than I thought it was out here,” Pruett declared.
When a wreck temporarily shut down southbound lanes of Interstate 85, some traffic began diverting onto Spencer’s main drag — Salisbury Avenue — and Taylor directed Pruett and Brown to concentrate their efforts on that four-lane street.
“10-4, we’ll do that,” Pruett answered over the radio.
Snowplows from the city of Salisbury and the N.C. Department of Transportation also were helping, making some passes on Salisbury Avenue (U.S. 29).
Brown took the outside lane going south on Salisbury Avenue, while Pruett’s truck followed behind, angling its blade so snow was pushed toward the curb.
“Right there’s the yellow line,” Pruett said, squinting his eyes toward the pavement ahead. “I barely see it.”
The Spencer trucks turned around at the Salisbury city limit, then scraped the northbound lanes all the way past Swing Transport. It was surprising how much snow already had settled on the street.
Pruett took his time, trying to be safe as the snow kept coming down.
“I probably won’t be getting much out of second or third (gear),” he added.
When you’re driving a snowplow, Pruett explained, you have to watch out for several things, including manhole covers, storm drains and people.
“You always got to watch for pedestrians,” Pruett said. “I know what I’m going to do, but I don’t know what they’re going to do.”
And you really don’t want to hit one of those storm drains on the side.
“If we hit one, we’d know it,” he said.
To give it more traction, Pruett’s dump truck had about a ton of gravel in the back and chains on the tires.
Over the radio, Taylor asked Pruett to stop by the fire station at Third Street and Salisbury Avenue and plow the driveways in front and back.
“The piles of snow remind me of up north,” Pruett said after one of his passes. “But those are major piles up there, aren’t they?”
When it’s not clearing streets of snow, Spencer’s 10-man Public Works Department is busy collecting garbage three days a week, picking up limbs, collecting leaves, clearing storm drains, working at parks and mowing rights of way.
Pruett said he actually likes snow-plowing duties, but maneuvering around cars parked in the streets can be nerve-wracking.
Like most places across Rowan County Wednesday afternoon, Spencer businesses pretty much shut down, from Bojangles to virtually all the shops downtown.
The Kangaroo gas and convenience store at Third Street remained open and was doing a brisk business.
The Public Works Department put a lot of salt down Tuesday. Pruett said the blade was attached to his dump truck Monday because “we weren’t sure how quick this thing was coming in.”
“They said it was coming,” he added of all the forecasts. “I was kind of leery at first.”
Other men were scheduled to take over for Pruett and Brown Wednesday evening and early this morning.
“It looks like it’s packing pretty good,” Pruett said before heading down another street. “… All right, blade down again.”