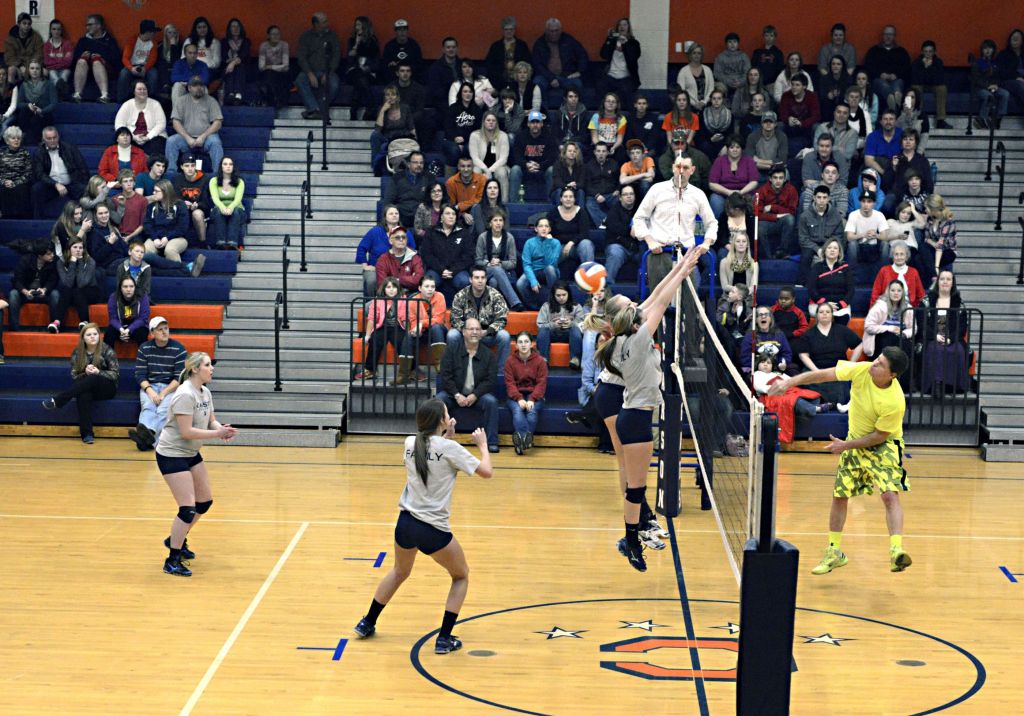 Bob Holmes went to all the Rowan-Salisbury traditional high schools and middle schools last week, playing teams at each school.

The only teams able to defeat Holmes were a co-ed team at South Rowan High School and the varsity teams of North Rowan and Carson.

Carson’s team has been to the state championships for the past two years.

The 58-year-old travels around the United States playing at churches, schools, colleges and fundraisers. He’s played in more than 5,500 gyms for more than 5 million people since 1983. He’s even been included in Ripley’s Believe it or Not! for playing the most games in any sport in history.

Holmes doesn’t just play volleyball, however. He brings what he believes is a very important message to each group he visits.

“I want to be more than a speaker,” he said.

Holmes uses his one-man volleyball team to get the students’ attention. He believes that if he plays the game well, “they’ll listen to the most important message — avoiding death.”

Holmes says he is tired of seeing teenagers die, so he tackles issues like bullying, suicide, drug and alcohol abuse and even texting while driving. He uses stories and photos to expose the sobering consequences of reckless behavior.

“Every 30 seconds, a teenager’s trying to kill himself because he was bullied at school or on the Internet. How many would agree with me that we need to change that?” Holmes said.

Although the community rally closely echoed his talks at the schools, Holmes also shared his personal faith.

“Bob’s message at the community rally regarding effects of bullying, damage of tobacco use, and danger of drunk driving was very similar at the middle and high schools,” Assistant Superintendent of Administration Nathan Currie said in an email, adding that school leaders were unaware Holmes planned to share his faith at the community rally.

“Bob visited and spoke at the middle and high schools and his personal faith message was not shared with the students,” Currie said.

“If you think there’s a lot of bullies around now, study Roman soldiers,” Holmes said, as he told the story of Jesus’ death on the cross.

He told the audience that Jesus stood alone so that he could save each and every one of the students there.

After he plays them in volleyball and earns their respect, “Then they’re going to listen,” she explained.

Even after he stopped playing and began speaking, Holmes was able to hold the students’ attention.

“I think a lot of people really listened to it,” said Carson senior Hannah Elmore.

“It was different — it was fun. It was a good experience,” added Michaela White, also a senior.

“Bob has an impressive track record with having worked with millions of students and hundreds of schools across the country. I think his demonstration of defying the odds by playing and defeating teams by him self in volleyball is an effective and engaging demonstration,” Currie said.

When Superintendent Dr. Lynn Moody came to the Rowan-Salisbury School System, she suggested that an official group be formed to look at existing programming and policies and suggest additional programing aimed at cutting bullying.

The task force is comprised of school personnel, parents, students and community members and is headed up by Currie.

“Bob’s encouragement to not be a by-stander to bullying was very inspiring as this aligns with the schools system’s Olweus Bullying Prevention Program,” Currie said.

This isn’t the first time Holmes has spoken to students in Rowan County. In 2011, he visited three middle schools.