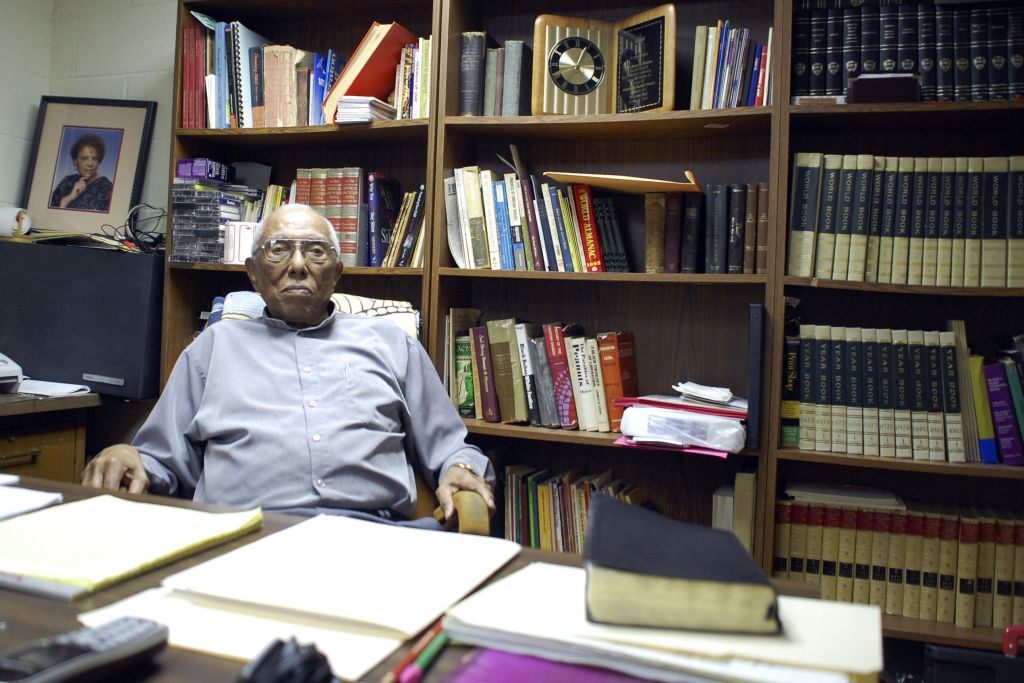 SALISBURY — When Dr. Henry B. Waiters arrived at Scott Air Force Base in 1949, he was a young Southerner fresh out of basic training and ready to start a 36-week course in radio repair.

At the Belleville, Ill., base, everything was still segregated at first. Of four squadrons, three were white and one was black. The black enlisted men also had their own barracks, mess hall, PX, chapel and service club.
The only real move toward integration had come in the classroom — the white and black airmen were going to school together.
But when full integration came, it happened overnight.
“That was a time I’ll never forget,” Waiters says today.
Men were chosen to move from each of the squadrons, and Waiters was one of them. In his new living quarters, formerly an all-white barracks, he was directed down to the sixth bunk.
The white man on his right was from New England. To his left was a white man from Alabama, and the white man in his bottom bunk was from Mississippi.
Waiters introduced himself and shook hands.
“All three of them said, ‘We’re going to get along just fine,’” Waiters recalls, and they proved true to their promise. “In my instance, it went real good.”
But his relations with white sergeants and lieutenants in the 334th Fighter Squadron would prove tougher later on as Waiters’ Air Force career took him into Korea three times.
Waiters often made rank, only to be demoted over a racially motivated action against him that he refused to ignore.
“I had never learned to be respectful to those who were disrespectful,” Waiters says.
Waiters’ role in integrating the Air Force stands as just one chapter of a rich life in which he often has been called upon to lead or open new doors.
Now 85, Waiters fashioned a 38-year run as pastor of Friendship Baptist Church in Lexington, while also forging a long career at R.W. Norman Co.
In Salisbury, he was one of the original members of the Negro Civic League, which helped to foster integration of public places and schools. He later played a role in establishing the Salisbury-Rowan Community Service Council.
Waiters also served as chairman and one of the longest serving members — 25 years — on the Salisbury Housing Authority Commission.
He spends much of his days now in the office basement of his home on West Bank Street, where he moved in 1986. He has typed and completed many pages of a manuscript titled, “Call No Man Reverend.”
“The name of the Lord God is reverend and not his servants,” Waiters explains about the overriding theme of his book.
In his office, Waiters is surrounded by his reference library, books on theology and all the certificates, plaques and diplomas he has earned and been awarded over the years.
Upstairs in his rambling house, a front drawing room is dominated by the portraits of the women who mean the most in his life: daughters Patricia House, Yvonne Dixon and Wanda Waiters and his late wife, Nancy, who died in 2006.
“She knew the Lord and loved the Lord,” Waiters says.
ggg

Waiters grew up at the foot of Dunn’s Mountain outside of Granite Quarry.
He was an only child, close to a blacksmithing father and a mother who taught him about self-reliance. She gave him lessons on washing and ironing his own clothes, crocheting, sewing, gardening and taking care of their horse, mule and cow.
“She said, ‘I’m going to teach this boy to do everything he needs to do,’” Waiters says. “She didn’t want her son to depend on a woman for anything but love.”
Waiters attended Antioch Baptist Church and Granite Quarry Colored School.
Waiters started working early. As a young teen, he would spend his summer on the back of a wheat-threshing machine, making 15 cents an hour and $1.05 a day. For two years, while still attending school, he drove a school bus. The job paid $13 a month.
Waiters also learned how to fire up the furnace in the school basement for $23 a month. So for a time, he was earning $36 monthly as a high school kid, the envy of many of his peers.
He worked for a time, too, at the Crystal Lake quarry, making 35 cents an hour by wielding an air-pressured monkey drill on huge rocks.
“That was fun, but it was dusty,” he says. “Lots of men died from the dust.”
ggg

Waiters graduated Granite Quarry Colored School in 1946 as class salutatorian. Until his father could no longer afford the tuition, Waiters attended N.C. A&T in Greensboro, hoping to become an automobile mechanic.
“I was smart in Granite Quarry, and I wondered how I got so dumb so fast,” Waiters says.
When he returned home, Waiters worked a few jobs before enlisting in the Air Force in January 1949. He took his basic training at Lackland Air Force Base in San Antonio, Texas, and considered attending flight training school briefly until his mother said she didn’t want him to fly.
Air Force tests placed him in radio repair school. He eventually was assigned to the communications section at Langley AFB in Virginia, and of four technicians, he was the only black radio repairman, responsible for the upkeep of equipment on six aircraft.
A white buck sergeant kicked Waiters from behind one day as he was stopping over to retrieve a radio set. Waiters said he was able to restrain himself when it happened, but he later told one of the few black officers about the incident.
They called the air police, and Waiters filled out a report, But the fighter group’s colonel became upset with Waiters for failing to follow protocol and not notifying the communications sergeant first.
“I had it difficult from that time on,” he says. Waiters vowed after the buck sergeant kicked him that “I wasn’t going to take it from anybody anymore.”

ggg
Overseas for more than a year, Waiters bounced between Japan and the fighting in Korea three different times, until coming back to the States and McGuire AFB in New Jersey.
Despite assurances he would be promoted to staff sergeant and tech sergeant if he re-enlisted, Waiters took his honorable discharge as an airman second class on Sept. 30, 1952.
He had been in the Air Force three years, eight months and five days — he can still rattle off those numbers.
Waiters believes he profited from his Air Force experience. “I was a part of something,” he says.
By the end of 1950, the Air Force reduced the number of its all-black units to nine, with 95 percent of its black airmen serving in integrated units.
African-Americans in Waiters’ time represented about 7 percent of the Air Force’s enlisted men.
The U.S. military was fully integrated by 1954.
ggg

Back home, Waiters saw many of the same color barriers he experienced in the military.
He worked a short time at Bamby Bakery, but he was fired after disputes with a foreman who “was as racist as they come,” he says.
Waiters found a job briefly with the Coca-Cola bottling plant, then became the first black receiving clerk for Salisbury’s Montgomery Ward store.
R.W. Norman, located on North Main Street, hired him as an assistant production manager, and he soon was overseeing the piece goods department.
“That’s when I really began moving up,” Waiters says. He stayed with Norman’s 31 years until its closing.
Over those years, he took several quality control and safety courses and headed the company’s safety committee.
ggg

Waiters moved to Salisbury and built a house on West Monroe Street in 1963. In the early 1960s, he also became involved in the Negro Civic League and credits the organization and its strong leaders, such as Wiley Lash, for the progress the community saw in race relations.
The sad thing, Waiters adds, was “that once we had accomplished our goals, people became complacent.”
Waiters served as president of the Negro Civic League in its waning years, trying unsuccessfully to revive it. It died a short time later.
Dr. I.H. Miller appointed Waiters to the original Salisbury-Rowan Community Service Council Board.
In September 1974, Salisbury Mayor Bill Stanback tabbed him for a commissioner’s spot on the Salisbury Housing Authority’s five-member board. He was the board’s third black member.
Waiters would serve as a housing commissioner for 25 years, five of those as chairman. Executive Director James Taylor kept wanting him to stay on for continuity.
“I think we accomplished great things,” Waiters says.
Another civic responsibility Waiters took on was forming a Safety Committee with Salisbury Police Officer Polly Stone at Knox Junior High.
“That was interesting,” Waiters says. “There was just the two of us.”
Elsewhere in his personal life, Waiters worked diligently for Antioch Baptist Church. He served as superintendent of the Sunday School, taught a class and sang in the church choir.
Nancy guided him toward becoming a pastor. Waiters didn’t know it until Nancy told him, but he often spoke aloud at night, preaching and praying in his sleep.
“I don’t sleep at night because you keep me awake,” Nancy protested.
ggg

Waiters preached his first sermon at Antioch Baptist in 1968. In 1969, he served an internship with Friendship Baptist Church in Lexington and soon became the congregation’s full-time pastor.
“This is where the Lord wanted me,” he says.
If the Lord was calling him, Waiters said to himself, he also needed to be better prepared. He began taking night classes at Hood Theological Seminary but found it too liberal.
He wanted a more conservative and what he considered a more doctrinally sound school. It led him to taking extension courses first from LaSalle, then from a seminary in Clarksville, Tenn.
Waiters earned his bachelor’s in theology from Clarksville in 1982; his master’s, in 1984, and his doctorate, in 1986.
Meanwhile, he guided Friendship Baptist, a congregation of about 130 members, into a building campaign for a new church which covered six different phases.
The fellowship hall came first in 1974. The sanctuary was complete by 1984. His pastorship at Friendship was made possible, he says today, by how understanding his employers at Norman’s were over all those years.
“I thank God many, many times for my job at Norman’s,” Waiters says.
ggg

Waiters retired from Friendship Baptist in late December 2007. He says a sinus condition, combined with asthma, robbed the power in his voice.
He remains a commanding presence, however.
Waiters has joined North Main Baptist Church and says he preaches whenever Dr. Dale Robertson, the pastor, has other obligations.
Waiters also is involved with a men’s prayer breakfast once a month.
He promises his book, “Call No Man Reverend,” will be controversial. Many people might find it objectionable, he says.
But if his life has taught Dr. Henry Waiters anything, it’s how to have a thick skin.
Contact Mark Wineka at 704-797-4263, or mwineka@salisburypost.com.