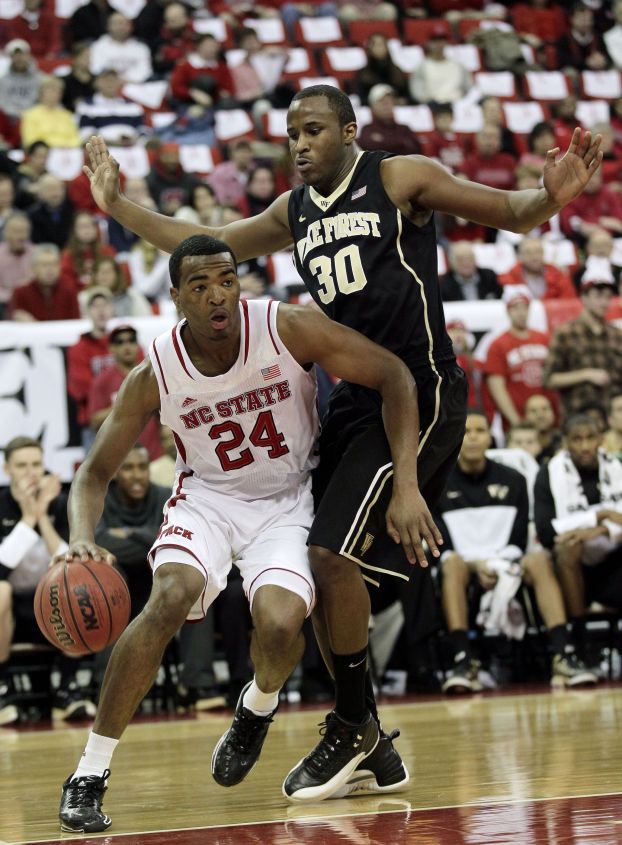 RALEIGH — T.J. Warren and North Carolina State weren’t about to let another game against Wake Forest come down to one shot.
The ACC scoring leader had a career-high 34 points and 10 rebounds in the Wolfpack’s 82-67 rout on Tuesday night.
Ralston Turner added 16 points while Warren, who entered averaging 22.6 points, had that by halftime and finished 15 of 26 with a career-high-tying three 3-pointers for the Wolfpack (16-8, 6-5), who have won five of six.
“He’s one of the best (scorers) I’ve ever had,” N.C. State coach Mark Gottfried said. “He’s got a knack to score in such a variety of ways. I think it’s unique. And right now what’s happening is, he’s making the 3. … He’s improved as a foul-shooter.
“So now when he’s aggressive offensively … he can capitalize by going to the line and making them.”
N.C. State reeled off 12 straight points midway through the second half and cruised from there to its ninth straight home win in the series.
Codi Miller-McIntyre had 15 points in his return from an injury for the Demon Deacons (14-10, 4-7).
They went scoreless for nearly 5 minutes during N.C. State’s game-breaking run, lost their fourth straight and fell to 2-29 in ACC road games under fourth-year coach Jeff Bzdelik.
N.C. State scored 23 points off Wake Forest’s 14 turnovers, and the Demon Deacons managed only 11 offensive rebounds and seven second-chance points.
The Wolfpack also shot 52 percent, hit eight 3s — their most in two months — and built a 36-31 rebounding advantage.
Travis McKie said Bzdelik spent his post-game speech “telling us the importance of every possession.
“Not turning the ball over, not making free throws, is critical,” McKie said.
The Wolfpack led comfortably through the second half and turned it into a full-fledged blowout after Tyler Cavanaugh’s jumper with just over 13 minutes left pulled Wake Forest to 56-47.
Turner and Desmond Lee each made three free throws during the 12-0 burst that followed. Barber hit a big 3 to make it 63-47 with 101/2 minutes left, then pushed N.C. State’s lead into the 20s for the first time with a jumper with just over 9 minutes left.
BeeJay Anya ended the burst with a free throw that made it 68-47 with 8:30 left, and the Demon Deacons didn’t get closer than 13 the rest of the way.
“We just kept making simple mistakes,” McKie said, “and they capitalized on them.”
By then, the only drama was whether Warren would finish with his fifth 30-point game this season and break his previous high of 32 set two months ago against East Carolina.
“I just came out aggressive,” Warren said. “We’re at home, we wanted to defend our home court. They got us at their place and we just wanted to turn around and get them at our place.”
Barber finished with 10 points for N.C. State, which has won 11 of the last 15 in the series in Raleigh.
Devin Thomas and McKie each had 11 points for the Demon Deacons, who remained winless at PNC Arena since the infamous 2005 game in which Chris Paul hit N.C. State’s Julius Hodge below the belt.
They won last month’s meeting in Winston-Salem on a bucket in the closing seconds by Miller-McIntyre that had the Wolfpack feeling a bit chapped.
“It was still kind of on our minds a little bit,” Turner said, but “we didn’t really make it about revenge.”
The Wake Forest guard missed last week’s loss at Duke with a sprained ankle but was back for this one.
And he and his teammates were powerless to stop Warren.
In the first half alone, the N.C. State star scored 23 points — half the Wolfpack’s total — on 10-of-14 shooting with three 3-pointers.