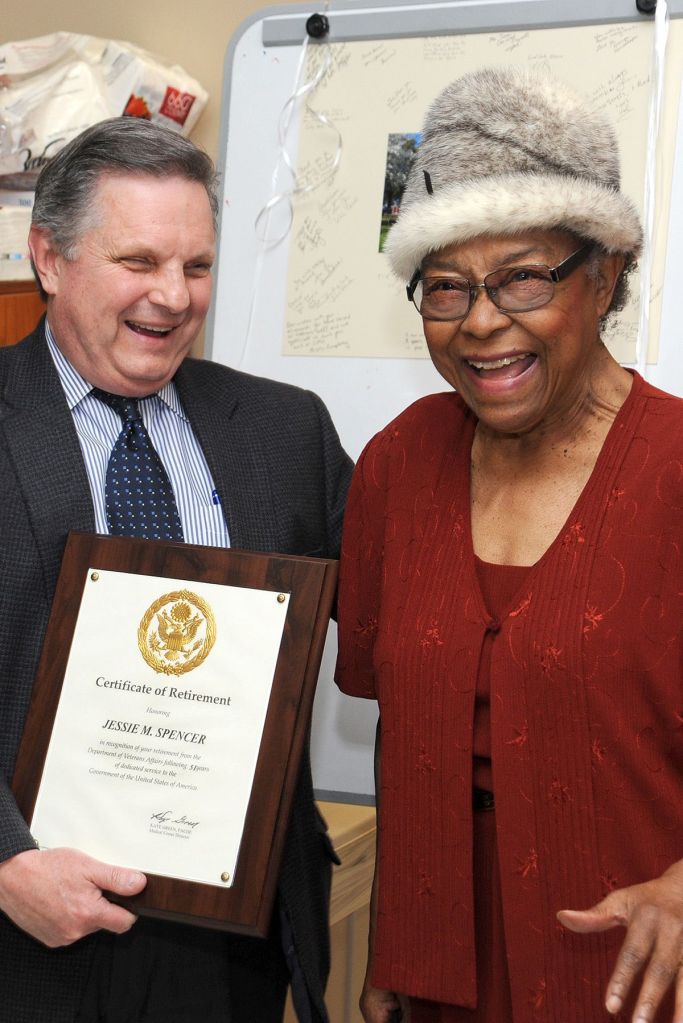 SALISBURY — Jessie Spencer has spent the better part of her life taking care of our nation’s heroes. Now after more than 60 years as a nursing assistant, 51 of those with VA, she’s finally going to take some time to take care of herself — she’s retiring.
Spencer, who most recently worked in the Specialized Inpatient Post-Traumatic Stress Disorder Unit at Salisbury, started here in 1969 after moving home to take care of her aging parents.
“I started nursing at Fitzsimmons Army Hospital in Colorado in 1948, until 1962 when I went into the VA system. I came back home because my parents needed me — I’m the only girl,” she said. “They were elderly and sickly, and my daddy said, ‘You need to come home.’ ”
There have been a lot of changes at the W.G. (Bill) Hefner VA Medical Center over the past 50 years, but one thing that hasn’t changed is Jessie Spencer’s love of taking care of veterans. She recalled one veteran in particular that was close to her heart.
“I started out working Building 2 in surgery. There was this one elderly man — I just took him under my wing,” she shared. “They would tell him, ‘Other people can give you a bath besides Jessie.’ He would say, “I’ll just wait til Jessie comes in, she’ll give me a bath.”
“When he died, it hurt me so bad. He was 80-something years old back then and I’m 80-something now. I think I’ve come full circle,” she added.
Working in any career for 65 years is quite a feat, but the key to doing anything for so long is enjoying what you do, said Spencer.
“I don’t think it’s been hard doing anything during my career because I’ve liked it. I love taking care of folks and making friends, and I try to do everything I can to make my patients happy,” she said. “I tell these young people, if you like your job, you stick with it.”
Pam Dixon, nurse manager in Spencer’s unit, said Spencer’s attitude is one to be emulated.
“If she could teach other people who serve veterans how to interact and exchange with them, it would be a better place. She’s always courteous, professional, dependable, and loves the patients,” she said.
Spencer said there have been times those who find out she works for the Veterans Health Administration question how she can deal with some of the more difficult personalities. This doesn’t go over well with Spencer.
“I defend my vets — I don’t like people talking about them. I love my vets,” she said.
When asked why she is retiring, Spencer was quick with a retort:
“At 86 years old, don’t you think it’s time? I’ll find something to do. My doctor said he better not catch me up here in Salisbury,” she said with a laugh in her voice.