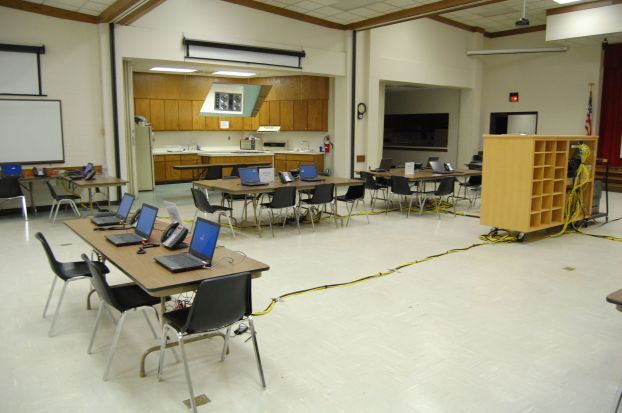 Dozens of computers are idling on tables in an empty auditorium at the Rowan County Agricultural Center, waiting to be booted up and networked into a central hub for emergency service personnel and county staff if necessary.
If the approaching storm threatens to pose significant problems across the county, including widespread power outages, officials will man the center and run the county all from one room if they need to.
“We’ve been monitoring this event since late last week and we’ve started to formulate in our minds what the potential could be,” said Frank Thomason, the county’s emergency management coordinator.
As of Tuesday afternoon, Thomason said the county is looking at a 24-hour period of snowfall — ranging from about 7 inches in the central part of the county to about 8 in the western part of the county.
A little bit of freezing rain and sleet is also predicted to fall Wednesday night, Thomason said, but that is subject to change based on the pattern of the weather system.
“Depending on which way (the storm) moves as it approaches the area, the conditions we’ll see are adversely affected,” Thomason said. “(The emergency operations center) was established and set up during a widescale multi-jurisdictional event that may impact either the entire county or multiple jurisdictions.”
The center serves as a coordinating location for all the local governments and response entities to manage the event, Thomason said.
The center has five levels of operational readiness, Thomason said.
“Level 5” means the center is closed and not operational, and “Level 4” signifies emergency management officials have foreseen a storm on the horizon and are beginning to gather weather information to share with the other entities in the county.
On Tuesday morning, Thomason and other county officials made the decision to drop to “Level 3,” meaning the equipment has all been set up at the Rowan County Agricultural Center, but nobody is staffing the desks.
“If something significant happens during the storm event, such as a widespread power outage, that would cause a large problem for our municipalities and local governments to respond to with all the utilities involved. It would require additional coordination, and we would man the emergency operations center,” Thomason said.
Bringing in staff would mean a drop to “Level 2,” Thomason said.
The director of emergency management said he doesn’t foresee a drop to “Level 1” — in which the center is fully manned and operational every minute of every day.
“It will be a significant event, but it will be a moderate event,” Thomason said. “We haven’t had a heavy snow like this in recent years.”