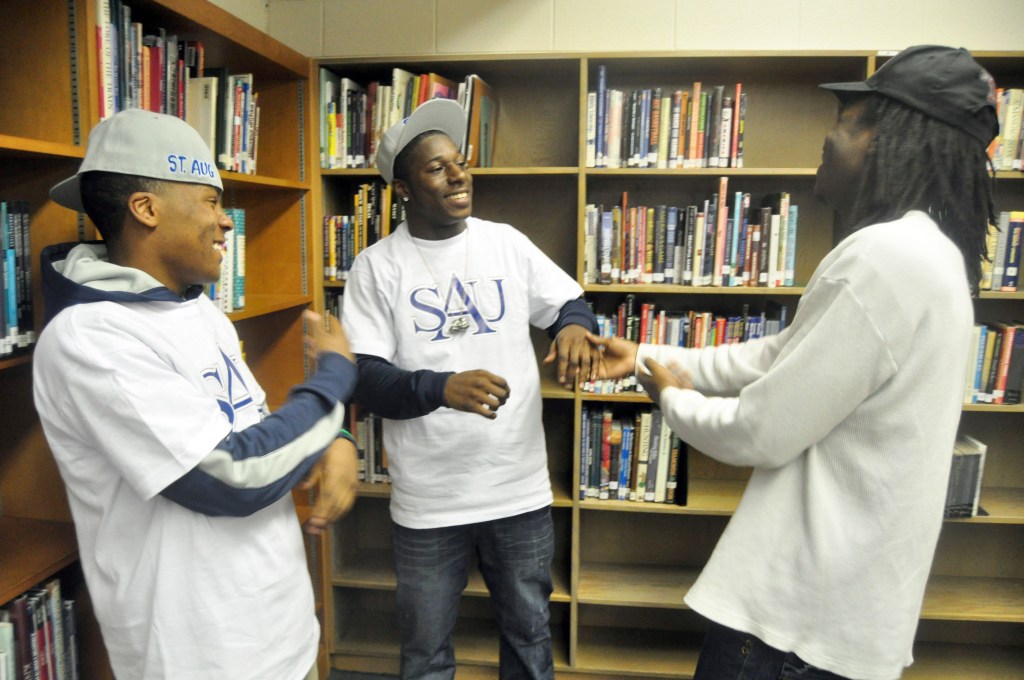 SPENCER — Kasaun Coney can drop beats, but secured the football every time it went his way at North Rowan.
Coney, who’s behind the mic in North’s ‘Green and Yellow’ celebration song you’ve probably heard a hundred times at Eagle Stadium, was a leader in the Cavaliers’ defensive backfield for the past two season and a fixture in the North football resurgence.
Coney signed to play at St. Augustine’s Tuesday alongside teammate Xavier Robinson. It made sense that Robinson, a linebacker who wears No. 8, and Coney, No. 9, signed as a duo.
“It’s kind of crazy that I’m going to college as a Falcon when just a couple of months ago I didn’t want anything to do with Falcons,” Coney joked in referencing North rival West Rowan.
North was coming off a 4-8 season two years ago but has put together 21 wins since, the most in the county. The 13 wins in 2013 were a school record and North was ranked No. 1 for much of the season. Coney, a 5-foot-10, 175-pound free safety, was a vital part of that. Coney contributed on offense, defense and special teams the last two years, making him a Cav of all trades. It wasn’t unusual for Coney to make a play and then hear his trademark song.
“I’m so proud of being a part of that,” Coney said. “I actually felt when I came here I was going to have to go to a different school. I’m happy I was able to help turn it around. This class, last year’s class and next year’s class helped turn it.”
Quarterbacks in the area feared Coney and his 12 interceptions over the last two seasons. Coney, who got six picks each of the last two years, was without a pick through the first six games last season before the Lexington game.
Coney’s first interception of the year was probably his best. Under duress, Lexington quarterback Raekwon Byrd threw a ball destined to go over the end zone, not unlike Joe Montana’s pass to Dwight Clark. Coney somehow ran it down and made a leaping over-the-shoulder snag in the end zone for a touchback.
“One of the best interceptions I’ve ever seen,” North coach Joe Nixon said “It looked like a centerfielder laying out for a ball hit in the gap. It was really impressive.”
“I was like, ‘I haven’t gotten a pick all year,’” Coney said. “I’ve got to get this one.”
Coney had an interception in five straight games after the six-game drought to open the year. He rushed for 362 yards and three touchdowns as well.
“We were wondering when it was going to happen,” Nixon said. “That speaks volumes of our defense. We had more guys making plays which is a good thing.”
In 2012, he was the best special teams player in the county with six interceptions and scored twice on punt returns and once on a kick return.
Coney made his decision to go to St. Aug’s on Saturday. Coney found out Robinson would join him a day later. Coney said he didn’t know Robinson would be joining him.
“I’m going to be playing with him for the next four years so I’m going to have fun,” Coney said. “It feels good because now I know that I’m able to play at the next level.”
Coney runs a 4.6-second 40-yard dash, which is not bad, but he realizes speed is vital at the college level.
“I’ve got to get quicker,” Coney said.
This year he was used returning kicks and running the ball. Against Davie County, Coney scored on a blocked punt return and on a rush.
St. Aug’s, located a few blocks east of the state capital building in Raleigh, went 4-6 last season with a 3-4 mark in the CIAA. Not surprisingly, Coney wants to major in music education.
“I’m excited for two of my guys going to the same school,” Nixon said. “They really like the coaches and the program. Traditionally, it’s good football.”
Sounds like music to Coney’s ears.