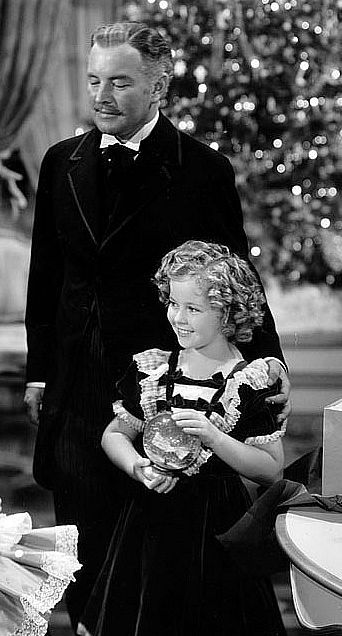 Can you name a contemporary film actor, either male or female, whose name alone can guarantee packed movie theater auditoriums?

George Clooney, Matt Damon, Brad Pitt, Meryl Streep, Sandra Bullock, Julia Roberts? Sorry, no. No doubt they are all super successful. Some of their films do boffo business, but some, not so.

How about actors from the golden era of Hollywood? There were Gable, Tracy, Flynn, Harlow, Garbo and Dietrich. Most of their movies scored big with audiences, but once in a while, they all had a loser.

For four years, 1935-1938, a period when the average American went to the movies twice weekly, there was indeed one performer whose name alone on the marquee filled every seat in the movie house in which her features were the attraction.

Let me put it in a way so folks who weren’t around back then can get a grasp of her impact. Shirley Temple was as “big” as The Beatles.

Mothers sent their young daughters to school and Sunday School dressed like Shirley.

Other than contractual obligations, there really wasn’t a need for the theater manager to put titles like “Captain January,” “Stowaway,” “Wee Willie Winkie” or “Rebecca of Sunnybrook Farm” in big letters above his box office. “NEW SHIRLEY TEMPLE MOVIE” would have been sufficient.

Just the name of this little girl guaranteed a smiling face on, not only the movie exhibitor as he headed for his bank, but also the millions of patrons who had plopped down their dimes and quarters to gain entrance to the magic auditoriums in which images on a silver screen would sing and dance for them.

It was the time of the Great Depression. Our country teetered on the brink of ruin. Most U.S. families struggled for food, for jobs, literally, for survival.

Yet, these same folks managed to save enough change to buy a movie ticket. But why might some miss a meal to see a movie?

To escape … to get away from it all.

They could check their personal troubles at the front door of their local movie house, as others better off financially checked their hats and coats upon entering The Stork Club. For two hours, they didn’t have to struggle and worry how they would get through the following day.

And often, their troubles evaporated because of one little girl. Not an ordinary little girl, but a moppet who could sing and dance and act as well, or better, than her adult contemporaries. When she made “The Little Colonel,” her first movie released in 1935, Shirley was 6 years old.

It was in this feature that Shirley, in teaming with Bill “Bojangles” Robinson, performed their now legendary “staircase dance” together, making them the first interracial dancing couple in American movie history.

Sadly, the scene was cut when the movie arrived in many Southern theaters. I would love to know if this was the case when the film played Salisbury’s Capitol Theatre April 17-20, 1935.

Robinson became Shirley’s idol. They made four movies together.

Fox Film Corp., the studio Shirley was under contract with, was struggling financially, just as many U.S. citizens. A corporate merger with Twentieth Century Pictures in 1935, creating 20th Century Fox, helped somewhat, but not nearly as much as the box office receipts from Temple’s films.

During the four years (1935-1938), Shirley made an incredible 14 movies, all box office bonanzas. Her films were made economically by Sol M. Wurtzel, the man in charge of the Fox “B” unit. Keep in mind that “B” pictures at Fox looked better, in terms of production, than “A” features at some of the other studios.

So there was nothing cheap-looking about any of them. And with costs lower and the high grosses Shirley’s films amassed, the doors at Fox were kept open and the electric bill was paid.

Salisburians can take pride of the fact that appearing with Temple in, not one, but two of her smash hits was local actor extraordinaire Sidney Blackmer, in 1935’s “The Little Colonel” in the role of Swazey, then two years later as Sesemann in “Heidi.”

It was an incredible run for this little girl. Despite her size, she was the biggest thing in movies. Not missing any opportunities, Temple merchandising was everywhere. There were Shirley Temple coloring books, dolls, doll clothes, paper doll books, curling irons and playing cards. Even her own clothing line designed for little girls, which was carried locally by Belk stores.

An interesting note of interest … when she was 7 years old, her life was insured with Lloyd’s of London, and the policy stipulated that no benefits would be paid if the child star met with injury or death due to intoxication.

But Temple, as all child stars, committed the ultimate sin in the entertainment business. She grew up. By 1939, her star was waning. Refusing to loan her to MGM to play Dorothy Gale in their upcoming feature “The Wizard of Oz,” 20th Century Fox cast Temple in the film “The Blue Bird,” a lavish Technicolor feature they believed would do similar Oz business.

It was an expensive failure and marked the end of Shirley’s unimpeachable star power. Apparently, those who saw it spread word that Shirley playing a nasty character was not acceptable.

After one more film, “Young People,” her contract at Fox expired and was not renewed. She was shown the sidewalk at age 12. It can be a cruel business.

Shirley stayed in the movie business, playing teen, then young woman roles. She appeared in some fine films during this period, including “Since You Went Away,” “I’ll Be Seeing You,” “The Bachelor and the Bobby-Soxer” and “Fort Apache” (in which she worked with John Wayne, Henry Fonda and director John Ford).

Although she gave very good performances, these were no longer Shirley Temple features.

As an adult, Shirley Temple Black ran unsuccessfully for Congress, but was later appointed a member of the U.S. delegation to the United Nations General Assembly, U.S. Ambassador to Ghana, U.S. Ambassador to Czechoslovakia and U.S. chief of protocol.

Not too shabby a career for a lady, who at the age of 4, auditioned for a role in the Our Gang (The Little Rascals) series of short comedies, and was rejected.

Mike Cline’s website, “Mike Cline’s Then Playing,” documents all the movies played in Rowan County theaters from 1920 through 1989.