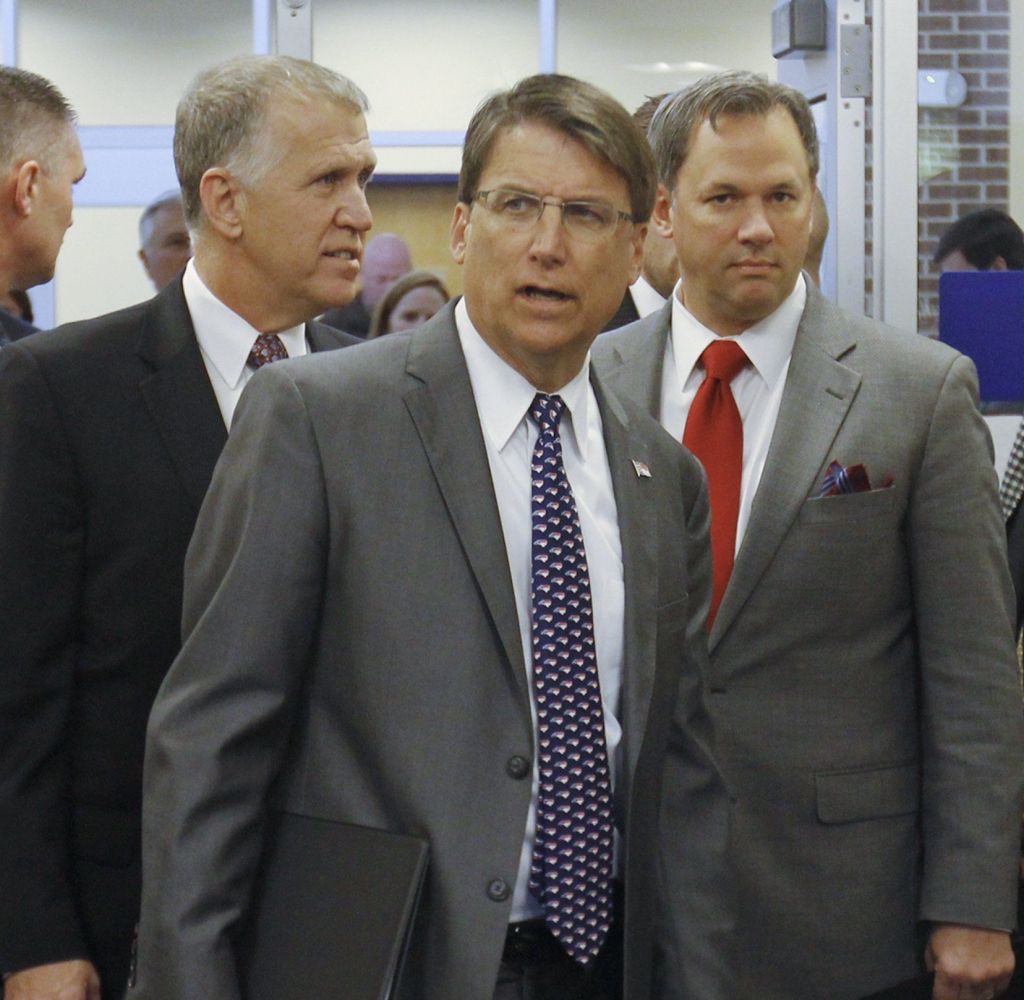 JAMESTOWN (AP) — Gov. Pat McCrory and top state lawmakers promised Monday to commit about $200 million over the next two years to raise pay for starting teachers from $30,800 a year to $35,000 and keep new educators from leaving classrooms.
The agreement to improve teacher salaries that are now among the lowest in the country has a strong chance of becoming law because McCrory and heavy majorities in the General Assembly are Republicans.
McCrory, Senate leader Phil Berger, R-Rockingham, and House Speaker Thom Tillis, R-Mecklenburg, said the deal announced at McCrory’s old high school in Jamestown is a down payment and raises for more teachers and state employees are possible this year if state revenues that shrank due to the Great Recession that started more than six years ago continue rebounding.
“We know we have the resources to do this” without raising taxes, Berger said. The pay raise “will pass without any difficulty whatsoever.”
McCrory credited cuts by lawmakers to cope with the recession and policy changes implemented since Republicans took control of the General Assembly three years ago for making money available for teacher raises.
“Today we have begun the process that will make every North Carolina classroom a teaching destination, not a layover to another career,” the governor said.
North Carolina was ranked 47th during 2012-13 among the states for average starting salaries, according to the National Education Association. The $35,000 minimum would vault North Carolina into the middle of those rankings and near the top of the list for Southeastern rivals.
Teacher salaries have been held down since 2008 except for a 1.2 percent increase in 2012. Teachers have seen their base salary stuck at $30,800 until after their fifth year on the job. Teachers with six and seven years of experience currently earn a base salary of less than $33,000.
At least 25,000 of the state’s 95,000 teachers would benefit from the promised increases, according to a document explaining the proposal obtained by The Associated Press. Nearly 9,000 more teachers and other instructors paid by federal and local funds would get raises because their salaries are based on the statewide pay schedule, according to the Legislature’s non-partisan fiscal research staff.
Berger and Tillis also announced they’ll revise an unpopular legislative decision last summer to phase out higher pay for advance degrees. Lawmakers had decided to cut off the pay bump for teachers who earned a master’s degree after this spring. The change would allow raises for teachers who began work on a master’s degree before last July.
North Carolina Association of Educators President Rodney Ellis said he was encouraged that some teachers could see raises, but leaving out experienced teachers undercuts educators who mentor the newcomers.
“This continues to be very divisive for educators in public schools because you’re going to have a lot of seven-, eight-, nine-, 10-year veterans who have been sacrificing the last five years along with all of the new teachers who are going to get these salary increases,” Ellis said. “These veteran teachers have been the ones who are currently serving as mentors in schools, serving as coaches, and doing so many extra things to make the schools function.”
Ellis also noted that the promised raises would come months before every legislator stands before voters, many of whom have indicated concern that low pay and tougher new working conditions could drive away good teachers.
“It does seem highly unlikely that it’s a coincidence that this year we are going to the polls and this year there’s finally going to be an effort to do something for teacher salaries,” he said.
The statewide teacher of the year said she hopes North Carolina leaders can do more to improve the lot of classroom teachers and show they recognize the profession’s importance to the state’s growth.
“Raising the base pay is a good start,” said Karyn Dickerson, an English teacher at Grimsley High School in Guilford County, who attended the news conference.