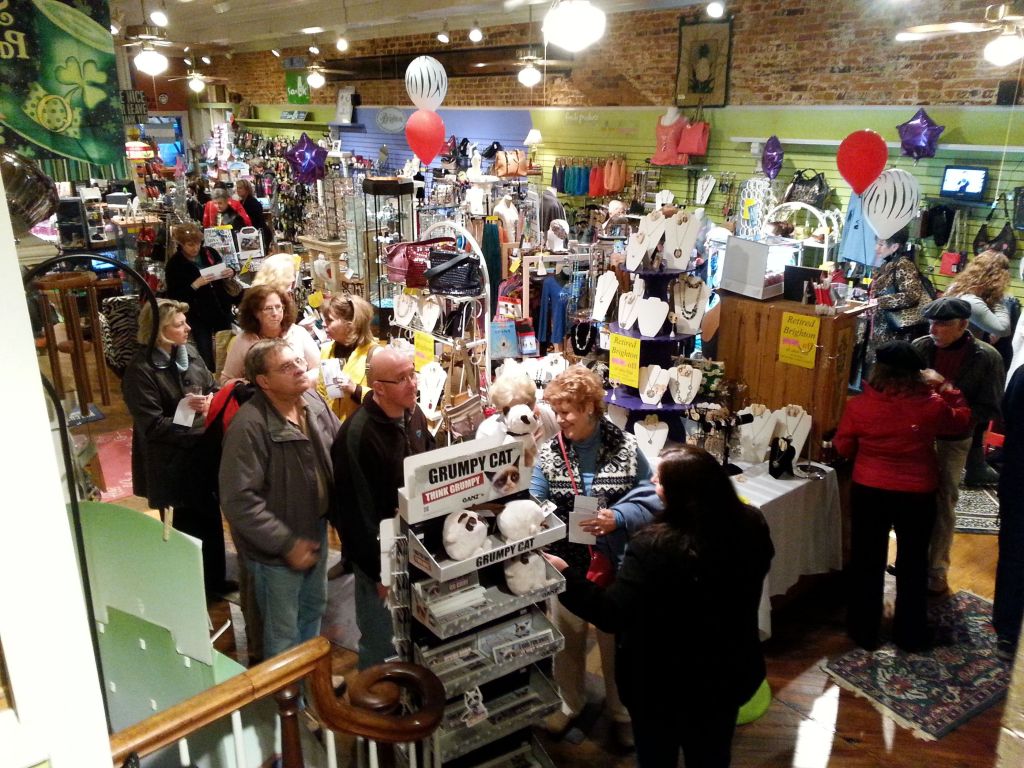 SALISBURY — Downtown Salisbury’s first wine crawl drew a large crowd Friday night, surprising organizers and leaving some wine wannabes empty-handed after 315 glasses sold out.
“It was an unqualified success,” said Toby Hagmaier, president of the new Downtown Salisbury Merchants Association, which came up with the idea.
Hagmaier said merchants were thrilled with the Wine About Winter event because it not only brought people downtown but also lured them into stores. Participants who bought a $5 wine glass visited 12 downtown shops to sample wine from a different country or region.
The event was part of a relatively new monthly downtown promotion call 1st Friday, which is different from the family-friendly Night Out celebrations, also held once a month on Fridays.
Hagmaier said organizers were sorry that wine glasses sold out. Anyone who ended up without a wine glass received five Downtown Dollars from Downtown Salisbury Inc.
“We had no idea it would draw such a crowd,” she said, adding that organizers will have more wine glasses on hand for next year’s event.
Restaurants reported one of their best Fridays in a long time, Hagmaier said.
While the merchants association created the wine crawl, the event would not have been such a success without DSI and the Rowan-Salisbury Convention and Visitors Bureau, she said. The groups promoted the event and provided the wine glasses.
Wine About Winter proves that all three groups can work together, Hagmaier said.
Merchants formed their own association because many were concerned that downtown promotions and events, while bringing large crowds to downtown sidewalks and streets, were not bringing shoppers into stores.
“We felt like nobody was listening to what we wanted to do and how we wanted to do it,” Hagmaier said.
The merchants association began hosting 1st Fridays more than a year ago and had similar success with the Busker’s Bash, where people went into stores to get guitar picks and used them to vote for their favorite street performers.
The newly rebooted Promotions Committee of DSI, which includes many members of the merchants association, recently voted to sponsor 1st Friday along with the traditional Night Out. The full events schedule for the 2014 events season will be announced the beginning of March.
“We were very, very pleased,” DSI interim Executive Director Paula Bohland said of the wine crawl. “It brought new shoppers and people to downtown who had not experienced our downtown.”