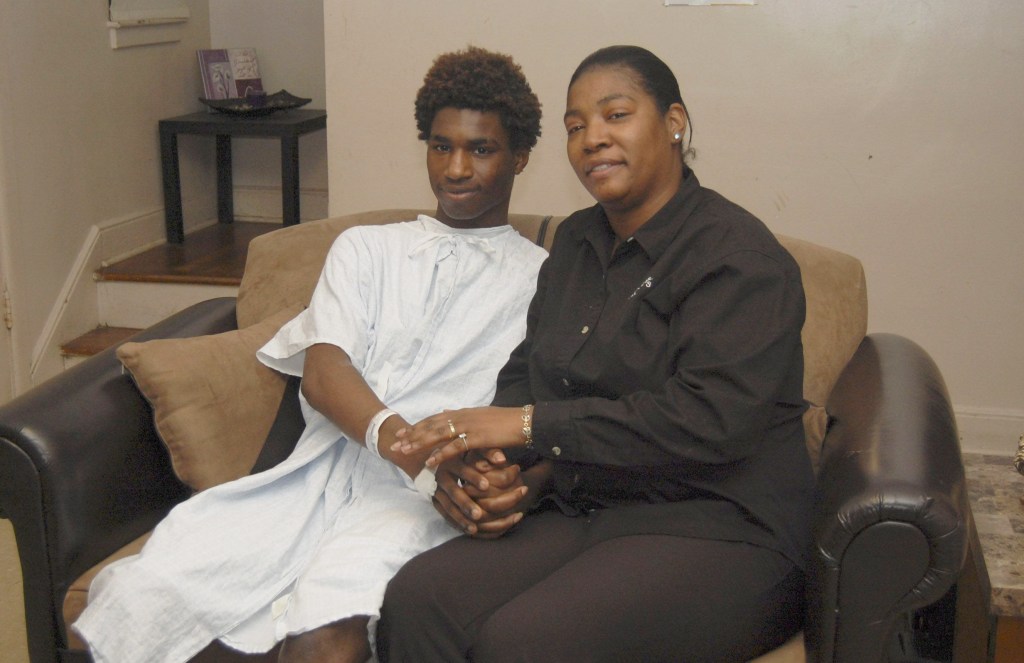 Shaleek Williams says he was just trying to be the peacemaker in a group of teens who were fighting Monday at Salisbury High School’s gymnasium.

Instead of ending the quarrel, however, the 16-year-old got the worst of it. He was shot.

Late Monday, police arrested DaJuan Lamont Russell, 17, at a relative’s home on East Fisher Street. He is charged with assault with a deadly weapon with intent to kill inflicting serious injury, possession of a firearm on school property and discharging a weapon on school property.

Russell was jailed under a $250,000 bond. His first court appearance is today.

Investigators say he was moving from house to house throughout the evening Monday but never left Rowan County.

Williams, a freshman, was shot in the stomach outside the school gym around 3 p.m. Monday.

A parent who was at the school drove Williams to Novant Health Rowan Medical Center, where he was treated for several hours then released. Other than a gunshot wound, Shaleek has a fractured rib. His injuries did not require surgery or any stitches.

Salisbury Police Department investigators say the shooting happened during a confrontation between two groups, including some Salisbury High students. Two suspects ran from the area.

The school was placed on code red lockdown for 50 minutes. All of the students in and around the gym were ushered inside when the shooting took place and later escorted out, said Police Lt. Tom Wilsey, who was at the scene.

Nearby Livingstone College was also placed on lockdown, as were Knox Middle School and the Ellis Street offices of the Rowan Salisbury School System.

As he tried to get the people fighting to leave the gym, another teen approached Williams and said, “What’s up with you then?” He then fired a shot at close range, striking Williams.

When Shaleek’s mother, Kim, received the call that he’d had been shot, “I was thinking that was a mistake,” she said.

Kim said as she drove to the hospital, “a lot of bad things were running through my head.”

The shooting stirred up memories of her husband’s death. Kim was six months pregnant with Shaleek when his father was killed. He was shot in the stomach. She didn’t make it to the hospital in time to see him before he died.

Kim hadn’t driven to work Monday and frantically ran from her job to get to the hospital. A co-worker picked Kim up and drove her the rest of the way.

She was in a panic to get to the hospital because she didn’t know Shaleek’s condition and “just wanted him to know I was there.”

Kim was wary of going inside her son’s hospital room for fear that she wouldn’t be able to handle seeing him. She sent her brother inside first after doctors warned her of the amount of blood she’d see.

Doctors told her the bullet missed all of his vital organs.

Shaleek says he knows the person who shot him. Shaleek and his family believe the teen disliked him and saw an opportunity to harm him.

Shaleek said he didn’t have an issue with the accused shooter and is friendly with everyone.

Shaleek just had a 16th birthday party Saturday at the Miller Recreation Center. Kim said the altercation did not occur at Shaleek’s party. She said there were no issues at the party, but afterward there were teens fighting in street not far from the party. She believes whatever the teens were fighting about continued Monday. She also believes the weekend fight was gang related. Police have not said the fight was gang related.

Kim said she doesn’t have any animosity toward the teen who shot her son.

“I don’t hold any hatred in my heart,” she said.

She says she told Shaleek on Saturday that he should not try to mediate when others get into fights.

Kim says she is a very involved parent. She monitors her children’s social media and knows who their friends are, she said.

The family doesn’t know the woman who drove Shaleek to the hospital, but are grateful that she did. Williams said a classmate, Tim Rose, grabbed him and helped him get inside the car.

“I remind him of how blessed he is,” Kim said.

The family is also appreciative of the students, coaches, teachers, administrators, parents and the school system for their support. There were dozens of people inside the hospital waiting room, Kim said.

A coach who did not want to be identified witnessed the shooting and told the Post that it first appeared Williams had been punched. But when the teen went down, the coach realized he had been shot.

Williams ran away from the gym, calling, “Help me! Someone shot me!” A parent opened the door to her vehicle and told Williams to get in, then took him to the hospital, the coach said.

Authorities said they believed the incident stemmed from an altercation that happened over the weekend. Some of the people involved in that fight apparently entered the school gym Wednesday afternoon looking to continue it.

Williams exited the gym when he was approached by a teen believed to be a former student.

The coach who saw the shooting said nothing like this has happened at Salisbury High in his time there.

“I never thought that it would happen here,” the coach said.

White said he heard about the shooting from another coach and the school’s athletic director.

He sent text messages to his players letting them know what happened and informed them the game that was slated for Monday night would be canceled. White also asked the players to pray for Williams.

The shooting happened a half hour after school had been dismissed for the day, but there were still students and staff there.

Salisbury police cruisers lined Taylor Street as a few parents began showing up at just after 3 p.m. making inquiries with the few people who were leaving the gym.

One parent, who asked her name not be used, said she received a frantic call from her daughter. She said her daughter was standing near Williams when the shooting occurred.

“He was standing right there,” her daughter could be heard saying as her mother walked toward her. Mother and daughter were led into a back door of the gym by Salisbury police. The teenager still seemed visibly shaken by the events that occurred moments earlier.

One student who didn’t want to be identified said she and some other students were standing in and around the gym when they heard the gunshot. She said she’d didn’t look back, she just ran. It was chaotic, she said.

Kathleen Bourque, a senior, was in the art room when the incident occurred. The students moved to a closet for safety.

“We all just kind of got in there and waited it out,” she said. “We were pretty nervous. We had no idea what was going on.”

Kathleen said the school’s secretary announced the school was on a code red lockdown over the intercom.

Kathleen said she and her friends were texting each other from different places in the school.

Her brother, Brendan Bourque, was standing outside the school when it happened. Brendan is a sophomore.

“I couldn’t see what was going on,” he said. “We went inside and then a few minutes later, we saw a lot of people storm through the doors. They were going crazy.”

Students who had been outside were taken to the auditorium.

Brendan said the people around him were nervous and scared.

“There were a lot of mixed emotions,” he said. “I was shocked.”

“I feel fine (about going back to school tomorrow), but I know there’s going to be a lot of talk going on,” Brendan said.

Salisbury police will have a strong presence in the school today, officials said. A ConnectED message to parents says the school will be on code yellow lockdown.

Principal Luke Brown, in the Monday message to Salisbury High parents said, “The safety of our students is our top priority and we will continue to take all necessary measures in ensuring that our school remains safe for all students.”

Student Services Director Carol Ann Houpe will be at Salisbury High with other counselors for students, staff and parents for one-on-one and group counseling “for as long as needed,” according to Rowan-Salisbury School System Public Information Officer Rita Foil.

Foil was unable to provide any additional information about the incident but said, this “shows us that our practice lockdowns” and crisis drills work.