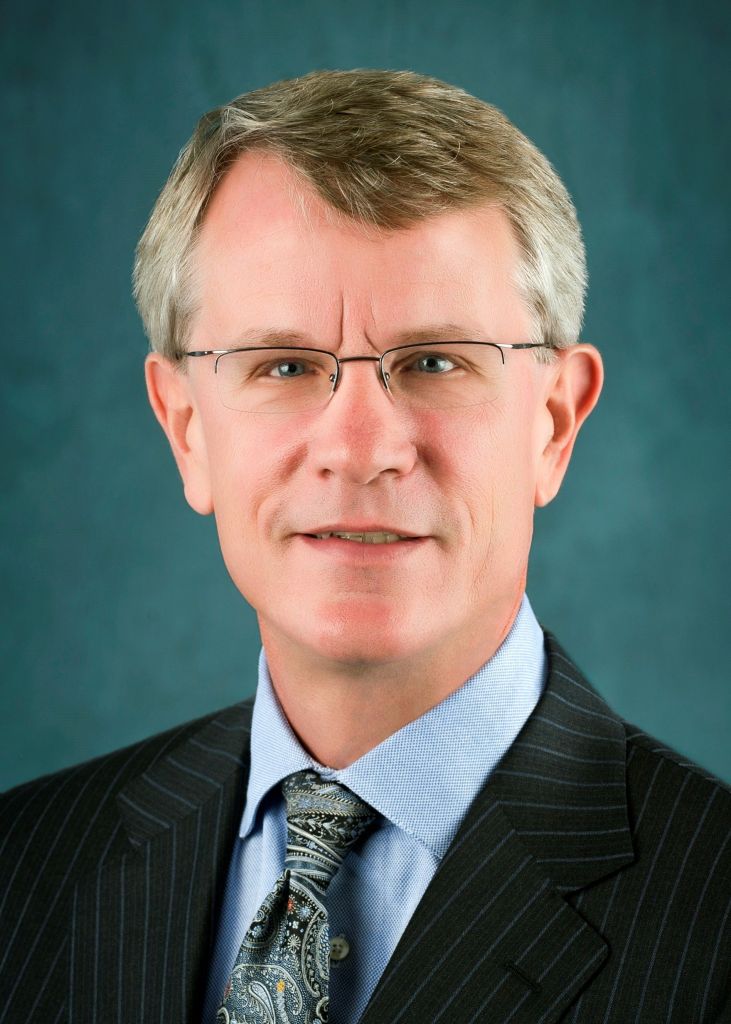 SALISBURY — Robert “Bob” H. Seehausen Jr. of Novant Health will speak on “The Affordable Care Act and its impact on the business community” at the Rowan County Chamber of Commerce’s Power in Partnership (PIP) breakfast on Thursday, Feb. 20, at 7:30 a.m. at Trinity Oaks (728 Klumac Road).
Novant will be the sponsor of the upcoming PIP breakfast meeting. Partner agencies share updates with the local business leaders and address issues of concern for the region at the breakfasts.
Seehausen has been with Novant for more than 14 years.  As senior vice president of business development and sales, he is responsible for system-wide payer relationships, strategic planning, pricing strategy and a 1,100-member independent physician network, called ChoiceHealth. He worked earlier in neonatal disease management with Paidos Health Management, physician practice management with Health Partners Inc., and was a founder of Tiber Group, a health-care strategic consulting firm.  He has worked with Price Waterhouse, Lutheran General Health System (Advocate) and Accenture.
He earned a masters in management degree from the Kellogg Graduate School of Management, Northwestern University, and a BA in economics from Carleton College. He was appointed to the board of the North Carolina Health Insurance Risk Pool. He is the past president of the NC Healthcare Information and Communication Alliance (NCHICA).
The Leadership Rowan class members also start their day at the breakfast and then venture out for a session focused on the community.
SALISBURY — Traci Williams has opened Anna Lu’s Children’s Consignment and Gifts at 103 N. Main St., beside Spanky’s.
Hours are 10 a.m. to 5 p.m. Monday through Saturday. The shop offers children’s clothing in newborn through junior sizes, maternity clothing, school uniforms and baby gear, as well as dance wear, baby legwarmers, backpacks, purses, one-of-a-kind holiday hair bows and everyday hair bows.
Williams offers name brands including Hollister, American Eagle, Abercrombie, Gymboree, Under Armour and more.
To reach the shop, call 704-209-4597.
CrossFit Crib held a grand opening event in downtown Kannapolis this past week.
The business is open at 134 West Ave. Call 704-933-CRIB (2742) or visit crossfitcrib.com for more information.
CLEVELAND — Daimler, parent company of the Freightliner truck manufacturing plant in Cleveland, reported that companywide profit declined in the fourth quarter but earnings at its global truck division nearly doubled from a year ago.
Daimler Trucks recorded earnings before interest and taxation of $762 million, a 92 percent jump from the previous year’s quarter, and revenue grew 9 percent to $11.5 billion.
The truck segment’s unit sales climbed 19 percent to 134,550, the company said Thursday.
Employees at the Freightliner plant are still working on an extended contract as negotiations continue between the union and Daimler.
Companywide, the German truck and car manufacturer reported a 36 percent drop in net profit, to $2.27 billion, despite 8 percent revenue growth.
“After the world market for medium- and heavy-duty trucks expanded perceptibly in 2013 despite difficult market conditions, further moderate growth in global demand is expected this year,” the company said Thursday.
In North America, Daimler said it anticipates “significant” market growth of up to 10 percent due to “the increasingly dynamic economy.”
Ralph Ketner spoke to agents of Apple House Realty this past week about his view of the “Four Secrets of Success” and what it takes to get ahead in business.
A question and answer period followed where he also shared numerous anecdotes about many of his experiences while building Food Lion into a major supermarket chain.
Food Lion has unveiled a new online tool, MVP Coupon Hub, to make accessing grocery coupons online easier for customers.
The new tool, found on the grocer’s website at www.foodlion.com/coupons, features convenient load-to-card and printable coupons.
“We’re proud to bring our customers the new MVP Coupon Hub, which helps customers save by offering hundreds of additional coupons,” said Keith Nicks, director of loyalty and digital marketing for Food Lion. “Now, our customers can access Food Lion’s Weekly Flyer specials at www.foodlion.com and easily navigate to MVP Coupon Hub to click or print coupons without ever leaving the site.”
Customers can select to instantly load coupons to their MVP Card or print coupons to use in the store, or both.
A video tutorial pops up to help customers visiting www.foodlion.com/coupons.
SALISBURY — CMC-NorthEast, part of Carolinas HealthCare System, offers free health talks each month led by expert physicians from a variety of medical specialties. For American Heart Month, CMC-NorthEast is presenting the following health talk in Salisbury:
“Know Your Numbers: Understanding Blood Pressure”
Ever wonder what it means to have high blood pressure? In this talk, Dr. Santosh Rao of Sanger Heart & Vascular Institute will discuss the basics of blood pressure and what you can do to control it on Monday, Feb. 17, at 6 p.m. in the Gateway Building’s second floor conference room, 204 E. Innes St.
Light refreshments will be provided. For more information or to RSVP, call 704-403-1042. Event is free and open to the public.
A senior financial survivor workshop will be held Thursday, Feb. 13, at 1 p.m. at the J.F. Hurley YMCA, 828 Jake Alexander Blvd. West in Salisbury.
Topics include an update of income taxes, probate and federal and state guidelines to protect you from nursing home expenses, ways to reduce or eliminate taxes on Social Security, interest income and capital gains, ways to increase the safety of your investments, stretch your IRA and 401k, and the advantages of bank CDs.
The workshop is free and both spouses are encouraged attend.
Seating is limited, so RSVP your reservation by calling 800-445-1157. It is sponsored and presented  by Estate & Elder Planning Center of North Carolina.

The Cabarrus Senior Resource Link, professionals who work with the senior population, will hold its monthly meeting on Tuesday, Feb. 11, at 11:30 a.m.
For more information, call Susan Wear at Gentiva Home Health 704-933-1001.
MOCKSVILLE — Bank of the Carolinas posted a net loss of $764,000 in the fourth quarter of 2013, according to its earnings report.
That was compared to net income of $147,000 in the third quarter of 2013, and net income of $551,000 in the fourth quarter of 2012. For all of 2013, Bank of the Carolinas lost $1.4 million, compared to a net loss of $5.5 million for all of 2012.
Net loss per diluted common share was 20 cents for the fourth quarter of 2013 compared with net income 4 cents per share for the third quarter of 2013 and net income of 14 cents per share for the fourth quarter of 2012.
The net loss for the year was 36 cents per share, compared to a net loss of $1.42 per share for 2012.
Nonperforming assets were $6 million and amounted to 1.41 percent of total assets as compared to $8.7 million or 2.03 percent of total assets as of Sept. 30, 2013, and compared to $12.7 million, or 2.91 percent of total assets as of Dec. 31, 2012.
Bank of the Carolinas Corp. is the holding company for Bank of the Carolinas, headquartered in Mocksville and with offices in Advance, Asheboro, Concord, Harrisburg, Landis, Lexington and Winston-Salem.
CHARLOTTE — CommunityOne Bancorp, the holding company for CommunityOne Bank, reported its second consecutive profitable quarter.
Net income after tax was $2.3 million in the fourth quarter of 2013 compared to $4 million in the third quarter and a net loss $6.3 million in the fourth quarter of 2012. For the full year 2013, net loss was $1.5 million compared to a net loss of $40 million in 2012.
For the full year 2013, core earnings were $10.4 million, an increase of 111 percent from 2012.
Noninterest expenses declined 23 percent, or $25.8 million, in 2013.
“We achieved all of the goals we set out for the company in 2013,”CEO Brian Simpson said. “We completed the merger with the Bank of Granite, returned our company to satisfactory condition with the lifting of the regulatory orders by the OCC and the Federal Reserve, continued to resolve the legacy credit problems by reducing nonperforming assets by 54 percent and lowering charge offs.”
Effective Dec. 31, Imperial Manufacturing Ice Cold Coolers changed its name to Imperial Brown Inc. as part of the completed merger with WA Brown Inc.
The company continues to operate from its Portland, Ore., offices and the Salisbury manufacturing facility. Imperial Brown is one of the top five walk-in manufacturers in the United States.
“We worked diligently at integrating the two companies and we can now say that it is a success. We now operate under the single name of Imperial Brown, with two facilities, on two coasts, and a singular voice,” said Rick Schermerhorn, president and CEO of Imperial Brown, in a news release. “Our sales, design and service organizations have been integrated and we have added staff in all departments in order to keep up with the increase in sales.”
The merger brings 200 eligible employees into a self-directed employee stock ownership plan, or ESOP.
Visit www.imperial-brown.com to see the new logo and brand, which are pending trademark registration. ?
Submit information about new businesses, honors and management promotions to bizbriefs@salisburypost.com. Include a daytime phone number.