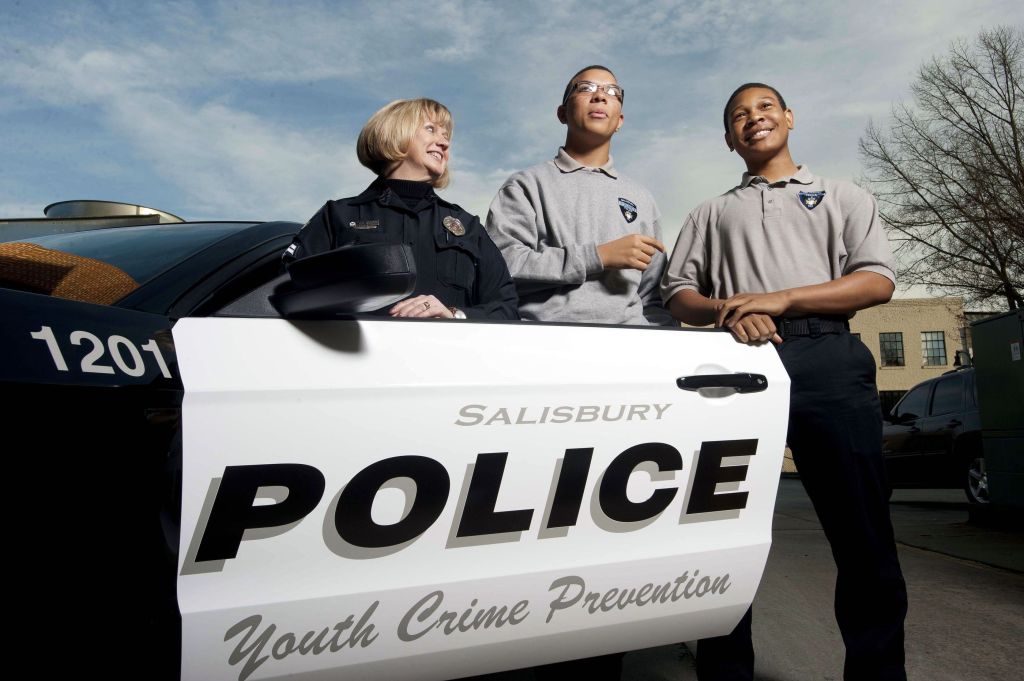 You will hear them again one day.

During Black History Month, a time to recognize African Americans who helped shape the United States, these Salisbury High School sophomores say they plan to make history. And city and school leaders who know the pair have no doubt they will.

“I have seldom seen such driven young men,” Mayor Pro Tem Maggie Blackwell said. “I’m not sure where their motivation comes from, but whatever the source is, it’s very effective.”

Woods and Brown, ages 15 and 16 respectively, already have lengthy resumés and lists of accomplishments. They know more about their city and how it works than most adults.

The boys, who believe they are distantly related, were inaugural members of the Salisbury Youth Council. Brown helped Woods win election as the youth council’s first president when they were freshmen.

They serve as Salisbury Police Cadets and started a student newspaper at Salisbury High School. They log several miles a day on foot getting to and from school and to meetings including City Council, Planning Board and Housing Advocacy Commission.

Their idea of a fun evening is attending the Zoning Board of Adjustment.

As if that’s not enough to keep them busy, Brown works part-time at the soda fountain at Innes Street Drug, and Woods has started his own tutoring business at Rowan Public Library.

“They are definitely impressive,” said James Page, a social studies teacher at Salisbury High and one of the advisers for Woods’ Model United Nations team.

Ann Cooper, the youth crime prevention officer for the Salisbury Police Department, said during her 18 years of working with kids, rarely has she encountered young people who are this motivated and responsible.

“They are highly unusual,” said Cooper, who supervises the cadet program. “They have gotten out there and found things to do and get involved with, and they’ve done it on their own.”

She began working with Woods and Brown when they were in third grade through the DARE anti-drug program. Both boys have grown up in challenging circumstances and have had several opportunities to throw their lives away but instead have risen above adversity, she said.

“These are top-notch kids,” Cooper said. “I definitely see them as leaders, whether here or wherever they go next.”

Companions since they were toddlers and partners in many efforts, Brown and Woods pause when asked if they are best friends. They often are on opposite sides. Both attorneys for Teen Court, Woods is the lead prosecutor and Brown is the lead defense attorney.

One a staunch Democrat (Woods) and the other an ardent Republican (Brown), the boys acknowledge their arguments can escalate and say they had their worst difference of opinion last year, when they did not talk for months after a profound disagreement over the student newspaper.

But their preparations for the youth council helped them reconcile, as they worked until 1 a.m. many nights while Woods crafted bylaws.

Since then, they have come to a new understanding, they said. When Brown is in charge of an effort, Woods will take a supporting role. And vice versa.

“I guess you could say we are maturing,” Brown said.

The boys still debate each other passionately and can demonstrate their commitment to civil discourse, and to different political viewpoints, at the drop of a hat. Given a topic like the death penalty or gay marriage, Woods and Brown immediately take opposing views and strongly but politely argue their side.

Both are so well-read, their exchanges sound like debates between college political science majors.

They discovered they both have an aptitude for public service and academic excellence when they were in sixth grade.

“No one understood us like we did,” Woods said.

“We were very unusual…” Brown starts.

“But then again, we both thought we were going to be Michael Jackson dancers,” Brown admits.

And the boys break into wide smiles.

This happens often, when seriousness and planning and politics give way to laughter and stories and good-natured ribbing.

“They just argue to the death, and then they laugh and laugh and clap arms around shoulders and walk out,” Blackwell said. “They are not adversarial. They are actually debating.”

Both boys maintain excellent GPAs and, not surprisingly, have detailed plans for the future.

Brown has the voice of a preacher and enjoys strategic planning. With the tempo and articulation of an experienced public speaker, Brown talks about his dedication to the Christian faith and his plans to study criminal justice and work in law enforcement or the military.

Woods has the charisma of a politician. He plans to earn undergraduate, graduate and doctorate degrees and enter the political arena, working his way up to the highest office in the land in 2044, to be precise.

He already has a tie picked out for his presidential inauguration ceremony. It’s blue.

“Some people say if you plant your belief about yourself in the universe, it will self-fulfill,” Blackwell said. “Tarik has planted that, and I’m planting it for him too.”

So what does motivate these young men, who have beaten the odds, brushed off ridicule from their peers and earned the respect of community leaders including the mayor and police chief?

Simply put, they motivate each other.

“It’s time to go, cuz,” one will say to the other when it’s time to walk to City Hall for the Human Relations Council meeting. “We have to keep our commitments.”

And they complement each other.

“If he goes too political, I will bring him back to the book, the Bible,” Brown said.

“If he goes too religious, I will bring him back to the constitution and First Amendment,” Woods said.

When the boys make a commitment, they give it their all, Blackwell said. Any mistakes they makes are solely due to inexperience and not to a lack of effort, she said.

“I do believe that we will hear more about them in the future,” Blackwell said. “In a good way.”