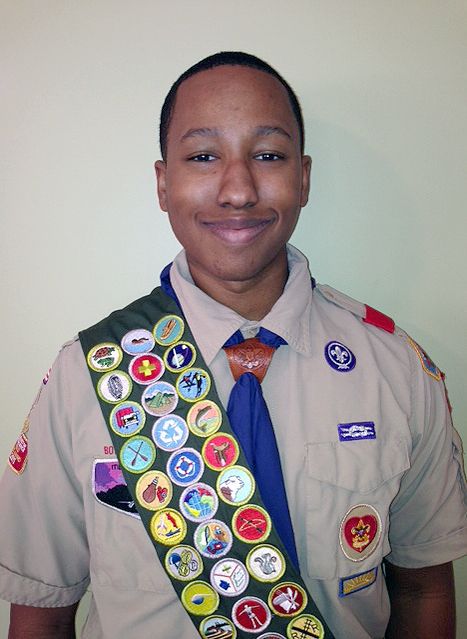 Julian Christian Seals, age 17, the son of Holly Lawson of Salisbury and Jessie Seals of Palatine, Ill., is an 11th-grader at East Rowan High School. He is being presented his Eagle Scout Award today Sunday, Feb. 9, 2014, at St. John’s Lutheran Church, Boy Scouts Sunday. Scout Master Henry Trexler, Troop 443, is making the presentation.
Julian completed 32 merit badges and his Eagle project on Water Conservation for Stillpoint Retreat. Positions of leadership include: Junior Assistant Scout Master and Young Eagles (Aviation) member since 2008.
Special Awards include Arrow of Light, KAYAKING BSA, National Patrol Award; OA-Election, OA-ORDEAL, Ecology Award for Chemistry, Soil and Water Conservation and World Conservation. Julian volunteered for eight weeks at the BSA John Barnhardt Camp, completing Counselor and Camp Staff Training in June to August 2013.
Julian has been an active member of the United States Bowling Congress (USBC) from 2003 to present at the Woodleaf Bowling Center, including the Pee Wee League, Chief White Eagle and Junior/Senior Leagues with perfect attendance. He was a state participant at the North Carolina State Bowling Association Tournament in 2005, 2006, 2008 and 2010 and a participant with the BB&T Rising Star Youth Scholarship Tournaments in 2008, 2011, 2012 and 2013. Julian has been a participant in the TNBA Southern Regional Tournaments in Kansas City, Mo., (2005), Memphis, Tenn., (2007) and Atlanta, Ga., (2008) in which he placed Second, Class 4 Singles.
Julian has been elected Team Captain of the East Rowan High School Bowling league three years in a row (freshman, sophomore and junior years) and received the Bowling All Conference High School Award for 2011-12 school year. He is also a member of the East Track and Wrestling Teams.
Julian attends Soldier’s Memorial AME Zion Church.

Love hurts: We should blame the brain, not the heart

If you have any doubt about what love is, all you have to do is listen to the music through... read more