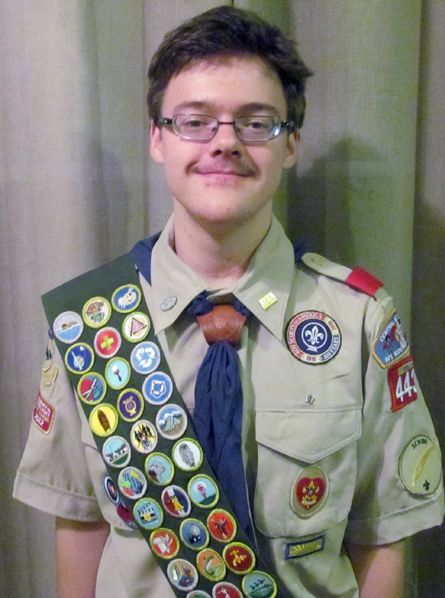 Cameron Reeder, 16, is receiving his Eagle Scout Award today Feb. 9, 2014 at St. John’s Lutheran Church of Salisbury. Henry Trexler, Scoutmaster of Troop 443, will be making the presentation.
Cameron is a 10th-grader at Gray Stone Day School and has been active in Octagon, FCA and Pep Band. He also enjoys playing guitar and has taken lessons for over five years.
Cameron started scouting in second grade as a Cub Scout and has earned his Arrow of Light award prior to becoming a Boy Scout. As a Boy Scout, he has earned 30 merit badges, attended Camp John J. Barnhardt and Camp Daniel Boone. He has held the positions of Patrol Leader, Scribe, and Chaplain’s Aide. As a Scout, Cameron has worked more than 100 hours in community service.
Cameron’s Eagle project consisted of collecting food supplies for the Care Package Project, Marine Parents group. With the help of Troop 443 and his Awana group, more than $ 1,100 was collected and sent for the active Marines in Afghanistan. As a supplement to the project, more than 85 thank you letters were made and sent along with the packages.
An active member of First Baptist Church in Rockwell, Cameron has been a member of Awana for eight years. He is active in his church youth group and participates in many youth activities.
Cameron is the son of Steve and Annetta Reeder, of Salisbury and the grandson of Vic and Ann Reeder of Eland, Wis., and Ray and Janice Call of Mount Nebo, W.Va.