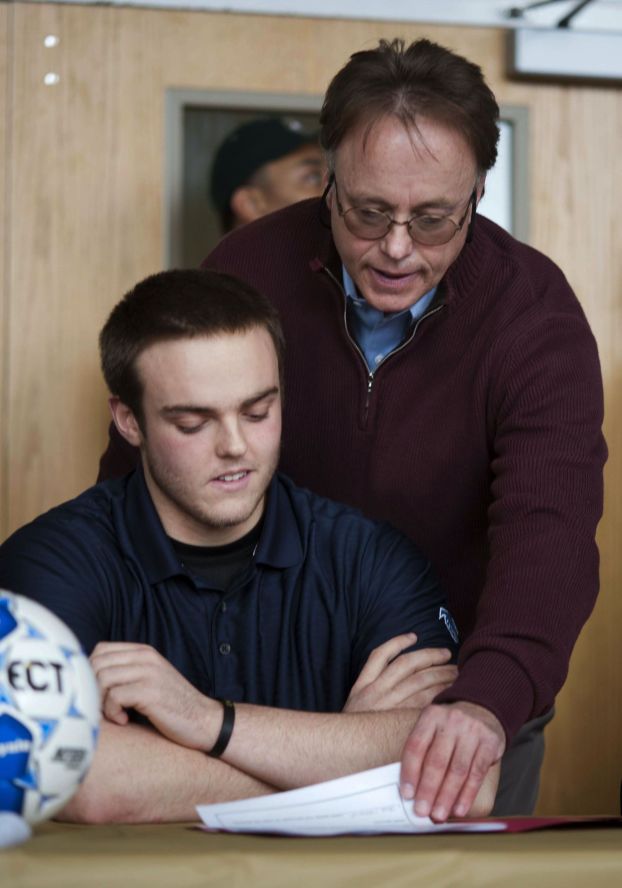 MOUNT ULLA — It’s not like he’s throwing down dunks or drilling 3-pointers, but West Rowan’s Chris Hassard holds his own on the basketball court every night.
At 6-foot-2, Hassard is as tall as anyone West has on the floor, and he’s by far the broadest.
He looks like the guy Hollywood central casting would send if you placed an order for an offensive lineman, but he doesn’t play hoops like an offensive lineman. There’s a lot more dancing bear to Hassard’s game than bull in a China shop. He’s usually good for six points, six rebounds, a couple of charges taken, and a lot of team-first sweat.
“Basketball has always been fun for me,” Hassard said. “I guess I surprise people once in a while with a move or by getting to a rebound they don’t think I’m going to get to. Obviously, I’m not the fastest guy out there, but effort makes up for a lot.”
Hassard signed his National Letter of Intent with UNC Pembroke last week, and while his contributions to the UNCP basketball team will be as a fan, he should be a factor on the football field.
Basketball has taken some pounds off him this winter — he’s more svelte than burly right now at 255 — but he looks forward to the meals and the weight-training that will get him back to 270 or so.
There are a lot of large linemen in the world, but Hassard has two things that make him a potential starter for a D-II college program. First, he’s smart. There’s an occasional ‘B’ on his report cards, but there are a lot more ‘A’s than anything. He has a 3.87 GPA.
The other thing that separates him from the herd is that athleticism that allows him to compete with higher-flying people on the basketball court.
“We’ve had a lot of good linemen here, but Chris is one of the most athletic linemen we’ve ever had,” West coach Scott Young said. “He jumps well, he runs well, he changes direction well. It’s that ability to move that sets him apart.”
Hassard modestly agrees with that assessment.
“You expect offensive linemen to be strong,” Hassard said. “But you don’t really expect them to be good athletes. That’s probably been my biggest asset.”
Hassard didn’t play football his freshman year. When he came out for the squad as a sophomore, he originally was ticketed for the defensive line.
He was athletic enough to play defense, but West was pretty loaded then — that team finished as 3A runner-up — and the offensive unit needed his brawn.
It’s worked out well for him. He’s been All-NPC, All-SPC and All-Rowan County. And for the last two years, he’s been in the best-offensive-lineman-in-the-county conversation.
Like his team that went 6-6, Hassard had a strange senior season. He played left tackle for two games, then moved to right tackle. He finished the year at right guard.
“Right guard was his best position, and that’s where he was most productive,” Young said. “At Pembroke, he’ll probably be an interior guy.”
Hassard likes guard best, but versatility never hurts and having some tackle experience can only be a positive in his future.
UNC Pembroke offered Hassard early and the Braves always were among his recruiting frontrunners. Wingate made a strong push late, and there was some uncertainty, especially after UNCP announced in late January that head coach Pete Shinnick was leaving for West Florida.
But Hassard’s closest tie to UNCP always has been Steve Saulnier, assistant head coach and offensive line coach. That’s the guy he felt a strong connection to on his recruiting visit.
“It looks like they’re keeping the staff there,” Hassard said. “Coach Saulnier is a guy I really felt confortable talking to and would be comfortable playing for.”
Like every one UNCP recruits, Hassard was stunned — in a good way — by the school. While it’s sort of in the middle of nowhere, it has a lot going for it.
“Nice stadium, nice dorms and nice campus,” summed up Hassard.
UNCP is getting a nice player.
Watch the highlight videos starring Hassard and he stands out.
That’s him making a block against South Point as quarterback Harrison Baucom sneaks into the end zone. That’s him pulling and wiping out two Hickory Ridge defenders as Daisean Reddick dashes for a big gain. And there he is charging like a bull to throw a block 20 yards downfield.
Hassard’s best game was against Hickory Ridge. West game-planned to run the ball, and Hickory Ridge game-planned to stop the run.
West won that battle of wills. The Falcons rushed for a season-high 416 yards, and Hassard was exhausted when it was over. He told the Post’s David Shaw that there’s no better feeling in the world than being worn out but knowing you’ve overpowered your opponent.
Hassard moves on to his third sport in a matter of weeks. That’s golf — a sport in which he gets to compete along with his brother, Cameron, for the Falcons.
“I’ll be able to gain some of the weight I’ve lost,” Hassard said with a laugh. “You don’t have to run in golf.”