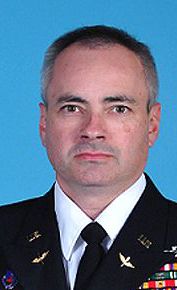 Mark E. Pickett, a 22-year military veteran and a Rowan County native, was recently promoted to the rank of Army Lieutenant Colonel in the North Carolina National Guard. Pickett, an AH-64D Apache Attack helicopter pilot, serves as the executive officer of the NCNG’s 449th Theater Aviation Brigade and is responsible for the daily operations of the nearly 800 Citizen Soldiers who fly and support the brigade’s UH-60 Blackhawk and LH-72 Lakota utility helicopters and the Apache Attack helicopters.
Lt. Col. Pickett, who now lives in Raleigh, is a 1992 North Rowan High School graduate and the son of Thomas and Karen Pickett of Salisbury. He was an Eagle Scout and a member of Franklin Presbyterian Church. A Master Aviator with over 3,000 hours helicopter flight time, his career has been out of the Salisbury National Guard, where he signed up 22 years ago. Pickett deployed to Afghanistan in 2003-04 and to Iraq 2008-09. He received several Air Medals while in Iraq.
Many of the soldiers he leads are from the NCNG’s Flight Facility 2 in Salisbury where the Blackhawks are flown.
ggg
Navy Seaman Cole A. Riley, son of Allen C. and Tammy C. Riley of Mooresville, recently reported for duty aboard the aircraft carrier USS Harry S. Truman, homeported in Norfolk, Va.
Riley is a 2013 graduate of Hopewell High School of Huntersville and joined the Navy in July 2013.