Owners search for answers after dog is shot 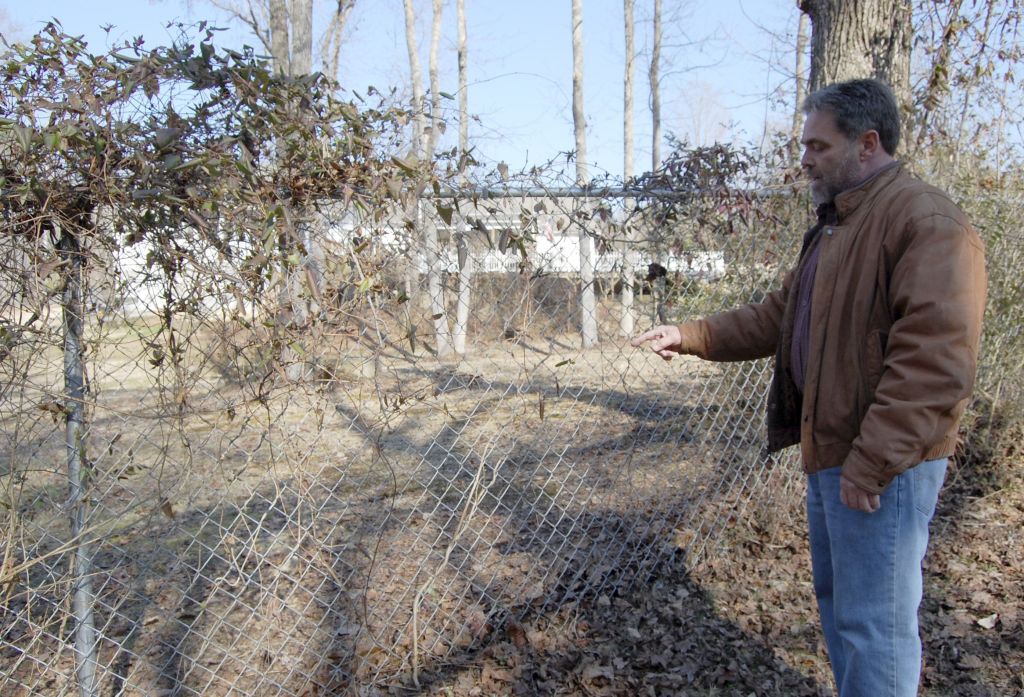 FAITH — Chris and Karen Haussmann received their blue-eyed hound Jake, or “J.C.” for short, from their daughter four years ago. On Thursday, the couple discovered someone had shot and seriously injured their beloved chocolate and white dog, requiring him to have emergency surgery.
Chris said Karen discovered J.C. lying at the edge of their Stone Pointe Drive home in Faith. The bullet struck him in the left side of the neck. The hound, along with three other dogs — Smeagol, a hound; Dozer, a Labrador; and Skipper, a mix breed — all are contained inside a 5-foot chainlink fence that surrounds the home. The incident occurred between 7:30 and 8 a.m.
Construction workers, who were at the vacant home next door, jumped the fence to help Karen get J.C. inside her car. She took the dog to Lazy 5 Veterinary Hospital and was then referred to an emergency clinic in Matthews.
Doctors told the Haussmanns on Saturday that J.C. has a 50 percent chance of regaining the use of his legs. The bullet struck his vertebrae, shattering it. The veterinarian had to remove the shattered vertebrae since it was pushing on J.C.’s spinal cord. J.C. could be paralyzed, but they don’t know for sure.
“The doctor is cautiously optimistic. An inch over to the left, he would’ve been killed instantly,” Chris said.
The Haussmanns reported the shooting to the Granite Quarry-Faith Joint Police Authority, which is looking into it, said spokesman Todd Taylor.
Taylor said the investigation is in the initial stages and they don’t have anything to report yet.
An officer drove to the family’s home and spoke with neighbors, Chris said. The officer told Chris the dog could have been shot by someone squirrel hunting.
But Chris doesn’t believe that’s what happened. He thinks someone maliciously tried to harm his dog.
He hates to think it, but he doesn’t know what else to believe, he said.
“We were concerned about anyone who would shoot a dog in a fenced-in area,” Chris said.
He wondered aloud while showing a Post reporter where J.C. was found if someone was even trying to rob the house and shot his dog while in the process.
The back part of their home is surrounded by woods and it would not be hard to gain access to the dogs. Since J.C. was shot, Chris and Karen brought their other dogs inside.
They just don’t trust leaving them outside now, Chris said.
The couple have spent at least $4,000 to save the dog. He is expected to be at the emergency clinic at least another three or four days.
The Haussmanns plan to offer a $500 reward that leads to the arrest and conviction of the person responsible.
Anyone with information is asked to contact the Granite Quarry-Faith Joint Police Authority at 704-279-2952.
Contact reporter Shavonne Potts at 704-797-4253.