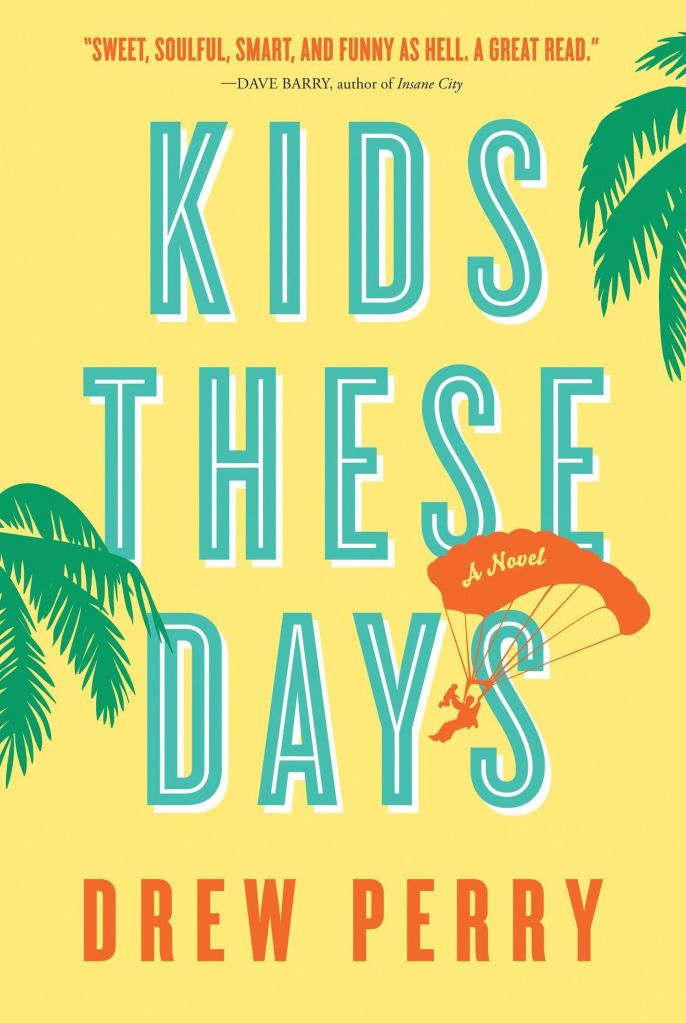 From time to time, a parachutist appears overhead in Drew Perry’s wryly funny second novel, “Kids These Days.” He is “the flying man” who regularly tips his hat to the Ingrams, Walter and Alice, late of Charlotte, a 30s-something couple who have fled to Florida in the wake of the mortgage banking crisis.
Not surprisingly, Walter admires him: “The nice thing about having a parachute, it occurred to me, was that when something did go wrong, you already had your parachute ready. Accounting for calamity is built into the plan.”
Perry’s first novel, “This Is Just Exactly Like You,” about a father’s relationship with his autistic-savant son and estranged wife, made calamity seem like the best thing that could ever happen to anyone. In his latest, Perry turns once again to the perils of parenthood, this time paralleling them with the effects of a little white-collar crime on a reluctant father-to-be.
Walter and Alice, it turns out, have terrible timing. Just as they finally decide to have a baby and Alice gets pregnant, Walter loses his forever job at the bank. The good news is that they can live for free in a condo left vacant by Alice’s late great aunt. The bad news is that Walter gets a job working for his brother-in-law, whose line-up of smart investments soon prove to be more shady than smart.
The novel echoes elements from Perry’s debut: hapless husband, disapproving wife, relocation and a series of not-altogether smart — OK, moronic but hopeful — decisions. From the get-go, Walter admits to grave misgivings about fatherhood. “I’d agreed to it — the baby — because I’d decided that was what was owed. That if your wife, whom you loved beyond measure, wanted a child, you were supposed to think it was a fine and perfect plan.” And he does, in theory. But in reality, he’s petrified.
Soon, he has the same, or greater, doubts about his brother-in-law and new boss, Mid (short for Middleton). They begin when Mid introduces Walter to his new duties — supervising two ice-making machines, a locksmith business, a sunglass-and-beach-umbrella shop, a sea kayak rental, a pizza parlor and the building of several ersatz fish-camp shacks — and escalate when Mid offers Walter a $30,000 check up front on his first day. It’s easier than paying him a salary or reporting him as an employee. Anything wrong with that? But within days, the already shaky ground Walter finds himself on opens into ever-widening cracks when Mid gets thrown in jail for what he calls “a setback.” Pretty soon, Walter’s fear of becoming a new dad is eclipsed by more immediate terrors: of being arrested for abetting tax evasion, drug dealing and money laundering.
Mid! He is the Jeff Bridges of the book, who steals scenes as easily as he moves money, with breezy remorse and a genius for picking his battles. A Zen-like white-collar criminal whose decency is at odds with his crimes, he downplays everything with a radiant, cool-headed charm that never fails to have the opposite effect on his jumpy bro-in-law: Mid: “They seem to have me on tax evasion.” Walter: “What kind?” Mid: “The evasive kind.” Perry deftly weaves in two secondary plot lines — Alice’s troubled pregnancy and a looming crisis with Mid’s daughter, Delton, who comes to live with the Ingrams. The more Walter sees of this mutinous, cigarette-smoking, newly tattooed teenager, the more he despairs of his own child’s future.
Delton’s daily life smells like teen spirit. “Kids were sending naked pictures of each other back and forth on their cell phone,” she says. “Kids were off birth control and using the rhythm method because birth control made them fat … Some kids had sworn off having actual sex. Not for religious reasons — it was just easier … Some kids are getting their genitals pierced,” she tells Walter and Alice. “But I don’t think I will.”
Halfway through the book, Walter hasn’t come much closer to embracing fatherhood. “I still did and did not want a child,” he says, continuing to look for guarantees that the ride might smooth out.
Not until he’s watched Mid’s world careen out of control does it dawn on him that there won’t be any parachutes or safety nets — and if the book has a flaw, it’s when Perry makes this a little too obvious. It’s enough to throw Walter into the fire, without a reminder that every unknown outcome represents his fears of having a baby.
But it’s a minor flaw in a book that, like Walter, never pretends to be anything more than what it is. Honest, filled with doubts, often hilarious and just a little bit scary, “Kids Like Us” is sure to appeal to all parents, even the ones still standing on the sidelines, trying to get all their ducks in a row first. Especially them.