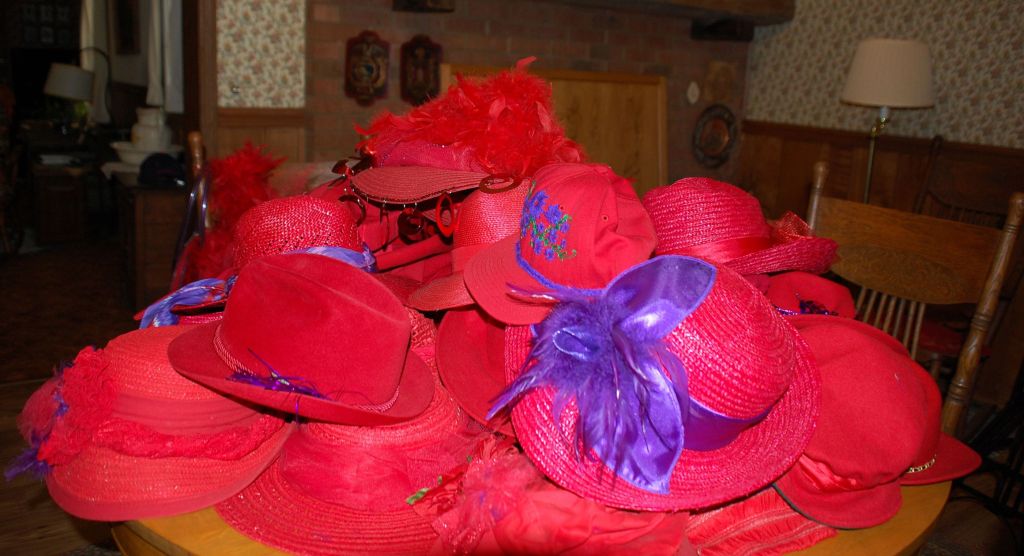 SALISBURY — Some things must come to an end, and so it was with the Historic Salisbury Red Hat Society.
When membership among the active Red Hatters declined in recent years to about 11 women, chapter founder and Queen Mother Bea Hall said, “We’re just going to stop this thing with dignity.”
Part of their dignified farewell was to agree to donate many of their red hats and other colorful accessories to Piedmont Players, always on the lookout for wardrobe.
Some hats, the chapter scrapbook, trophies and at least one purple outfit of the Red Hat Society also are going to the Rowan Museum, where Executive Director Kaye Brown Hirst has plans for a 2016 exhibit on how women have entertained themselves over history.
“It was a lot of fun for a lot of years, and we did many exciting things,” Hall said. “… It’s heart-breaking for me. It broke everybody’s hearts.”
But the Red Hat Society deserves to be remembered, Hall says.
“Our friendship will always remain, and our love for each other will be with us forever,” Hall told her other chapter members in a farewell message.
Hall promises there will be many reunions, and friends from the Red Hat days will still get together on other occasions.
Bea’s husband, Lester, has suggested they call themselves the “End of the Road Gang,” which elicits a laugh from Bea.
Established in 2001, the Historic Salisbury Red Hat Society was the first of several which formed in Rowan County, and others remain active.
Hall says a cousin in Aiken, S.C., became involved in the Red Hat Society movement sweeping the nation and encouraged her to set up a chapter in Salisbury.
Hall picked up one member at her computer club and another at her home demonstration club. Other women joined when she spread the word at her square dances.
“My goal was to get 20 because restaurants can’t handle it if you get much bigger,” Hall recalls.
The Historic Salisbury group maintained a membership of about 20 women through most of its existence.
Sue Ellen Cooper of Orange County, Calif., created the first Red Hat Society in 1998 for women 50 and older. (It is now open to women of all ages, but the women over 50 are known for their red hats and purple dresses.
The organization eventually grew to more than 40,000 chapters in the United States and 30 other countries.
Members of the Historic Salisbury Red Hat Society did many things beyond gathering for monthly restaurant dates. Four in the group made a trip to Edinburgh, Scotland, where they participated with other Red Hat Society members in an Easter parade.
That trip also included a journey into London for a play.
In North Carolina, the Red Hat women took train excursions, made trips to the mountains and beach, attended various productions and state Red Hat conventions and became involved in community projects.
They provided music three times a year for residents of the Carillon Assisted Living Center, besides making lap quilts for Alzheimer patients at Carillon and the Hefner VA Medical Center and more quilts for HIV-positive infants.
Always dressed to the hilt, the ladies ushered at the Meroney Theater’s Sunday matinee performances.
“I really don’t want to discourage the others (who are in Red Hat chapters elsewhere),” Hall says. “We got in at the very best time. I thought it was top of the line.”
As Hall became assembling all of her red hats for donating to Piedmont Players and the Rowan Museum, she realized she had 30 to 35 on her shelves, representing gifts, purchases or hats she made herself.
“They sort of came at me,” Hall says.