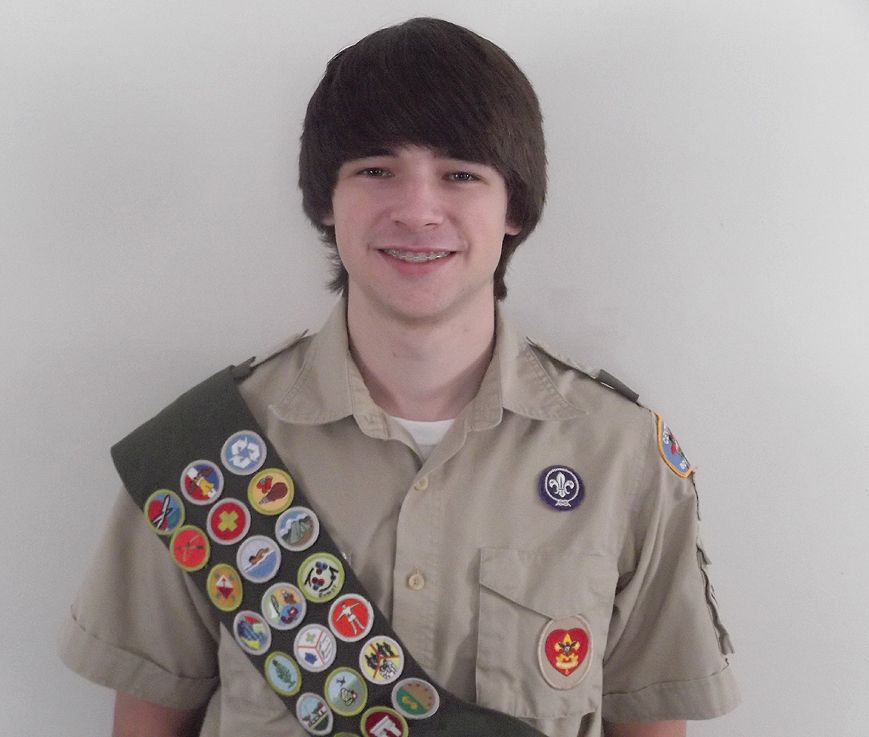 Evan William Rogers, 18, of Salisbury, is receiving his Eagle Scout Award today, Feb. 9, 2014, at Christiana Lutheran Church, which sponsors Troop 317. The award is being presented by Scoutmaster Jeff Fleming.
Evan has earned 21 merit badges and is the current Assistant Senior Patrol Leader. He has also served as the troop Quartermaster.
Evan joined Troop 317 while in middle school at the urging of friends and future Eagle Scouts Matt Fleming and Robert Egloff. As a member, Evan earned The Order of the Arrow, visited the National Scouting Jamboree at Fort A.P. Hill, attended numerous summer camps at Camp John J. Barnhardt and has worked on many community service projects.
A senior at East Rowan High School, Evan currently serves as Vice-President of the National Honor Society and Member-at-Large of Junior Civitans. He was chosen as a Junior Marshal in 2013 and is a member of the Student Council, Sigma Phi Gamma, Spanish Club and Disc Golf Club.
A lifetime member of St. Matthew’s Lutheran Church and Sunday School, he is active in the LYNC, Lutheran Youth of North Carolina and has participated in many service-related activities.
For his Eagle project, Evan coordinated the efforts of fellow scouts, friends and family members to beautify East Rowan High School by weeding, replanting and mulching the two natural areas outside the library. A bench, birdbath, bird feeders, trees and plants were added. Special thanks go out to Dr. Ronnie and Shalyn Barrier, Godley’s Garden Center, Lowe’s of Salisbury and Mr. Elliott Mathis for their gracious donations to the project. Mr. Mathis served as Evan’s mentor and provided guidance and support while donating his time, labor, plants and anything else he deemed necessary.
Evan is the son of Kendal and Lynn Rogers of Salisbury and the grandson of the late Ronald and Carolyn Rogers of Salisbury and the late Carroll and Mary Ann Gobble, also of Salisbury.