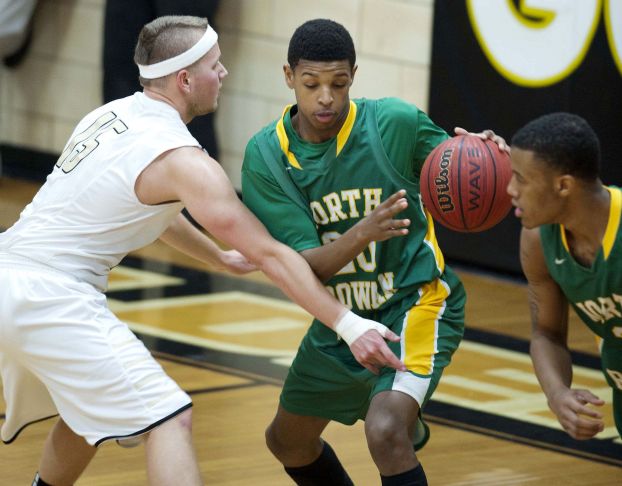 THOMASVILLE — North Rowan threw a lot of different looks at East Davidson Friday night and all of them were effective. The Cavaliers sprinted out of the gate to a 29-8 lead and overwhelmed the Golden Eagles 78-41.
The win kept the Cavaliers (13-5, 7-1) in a tie for the top spot in the Central Carolina Conference with Lexington with just two regular season games left. They will host Thomasville next Tuesday for Senior Night then close out at rival Salisbury the following Friday.
Against the last place Eagles, it was important for North to set the tone quickly and emphatically.
“We played a good game, played hard and did what we had to do,” senior guard Michael Connor stated. “We played hard to get them out of the game early.”
Connor, who led the win with 22 points on a combination of long bombs and slashing drives, closed in on 1,000 points for his prep career. He now has 992 and will likely achieve the mark on Senior Night. But he shrugged it off.
“I am not too enthusiastic about that because this is a team thing,” Connor said. “If it wasn’t for my teammates I wouldn’t even be close.”
North Coach Andrew Mitchell feels Connor has the right approach. “He is a humble young man,” he said. “If he keeps working hard and improving he will probably score 1,000 more somewhere else down the road.”
The Cavaliers opened the game with a five guard lineup and their quickness and defense paid big dividends. Paris Hillie, Jalen Sanders and Shareef Walker harassed East Davidson into eight turnovers in the first period. Then Connor and Joe Scott canned threes to key a 22-5 run.
The margin was 35-15 in the second period when North sent big men Michael Bowman, Josh Handy, Kenyon Tatum and Dalton Nelson to the court and they closed out the half with a 41-18 lead.
“We got to see a lot of our players play and the five guard line up did a great job,” Mitchell said. “They held their own on the boards and played good defense.”
The Eagles came out in the third period and played North evenly behind the inside play of senior Cody Bowers and the shooting of Austin Miller. But 21 points was about as close as they could get the rest of the way.
“We knew coming in we were overmatched,” East coach Matt Jacobs noted. “About the only thing you can do against them is keep the ball away but North is too good defensively to let that happen. We battled a lot harder than we did over at their place so I was pleased with that.”
The balanced effort for North was led by Connor’s 22 then eight each by Bowman, Sanders, Walker and Hillie. They connected for eight treys, four of them by Connor.
Reserve senior center Alex Billingsley celebrated his birthday with some quality minutes and brought the North crowd to its feet with a long trey late in the game.
“This was a good win for us,” Mitchell stated, “ but we’ve got two more we have to get.”
Bowers topped the Golden Eagles with 16 while Miller rained in four three’s to score 12.